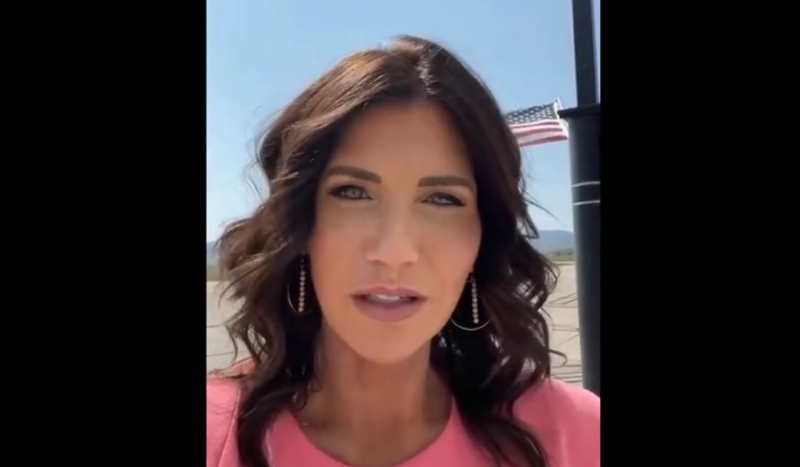 CV NEWS FEED // Gov. Kristi Noem, R-SD, is under fire for being unsupportive of a Republican-backed state bill that would prohibit South Dakota businesses from imposing “vaccine mandates” on their employees.

Workers in danger of getting fired for not getting vaccinated should “find a new employer,” Noem said in a tweet.

South Dakota Republican Reps. John Hansen and Scott Odenbach introduced the COVID-19 Vaccine Freedom of Conscience Act this month, citing a need to protect South Dakotans from being forced to choose between their consciences and their livelihoods.

Odenbach said: “I think the COVID-19 vaccines are good, and I am glad we have the vaccine, it is shown to be good for those who take it, but I am discouraging coercion.”

But Noem remained concerned primarily about the freedom of employers, not workers. “If we mandate one thing, are we setting a precedent for what we are telling businesses they have to do far into the future?” said Noem.

In a video message created in response to criticism, Noem accused Hansen and Odenbach of “chasing headlines” and suggested that their effort to protect workers’ conscience rights was “like a wolf in sheep’s clothing” that would “make government bigger and more powerful in your life.”

Noem’s unwillingness to side with workers against vaccine mandates received considerable backlash from conservatives.

“How do people keep falling for her ridiculous platitudes? She’s abandoning you and letting tyrannical businesses condition your employment on whether you take medicine you don’t want to take,” tweeted the popular Twitter account Columbia Bugle.

“…Noem is telling her supporters who are worried about vaccine mandates that she doesn’t care about them,” wrote Pedro Gonzalez of Chronicles Magazine.

this is SD’s problem… but her Presidential aspirations are pretty much over…Oh, she’ll try but this mindset is a disqualifier.. won’t keep men out of women’s sports (cowtow’s to the Ncaa) and now won’t protect working class constituents (cowtow’s to big business).. She can’t be trusted.

Noem received similar backlash earlier this year, when she blocked a bill that would have banned biological males from competing in girls sports in South Dakota — a decision that many conservatives decried as an example of weakness in the face of powerful national pro-LGBT organizations like the NAACP and other “woke” corporations who threaten to boycott states where conservative lawmakers take stands against Leftist causes.

Noem continues to stand by her position. On Wednesday morning, she argued: “Think about this… if I have the ability to dictate vaccine policy to businesses, then so does Joe Biden. Thank God neither of us do.”

Readers can watch Gov. Noem explain her position in the video below.