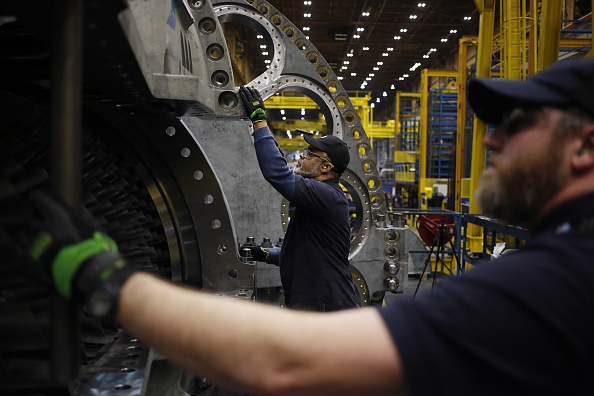 The protest began in the mid-morning at GE’s Greenville plant in South Carolina “and eventually swelled to include about 100 people, including children and some elderly people,” the Washington Examiner reported.

One protester also “told Fox News Carolina television station that he worked for GE for 35 years and was there to support the engineers who have been working from home for 18 months and could lose their jobs because they don’t want to give the company their medical information,” Slate reported.

A protester emphasized to reporters that the walkout was not a demonstration against GE, but against the federal mandate. Another said that he might be vaccinated, but joined the walkout because he refused to be compelled to hand over his medical information. Some demonstrators held signs. One read: “No Jab No Job. No Mandate.” Another: “My body my choice.”

The GE walkout in South Carolina is the latest example of a burgeoning movement of workers across many industries who are protesting vaccine mandates.

Employees refusing to comply with Southwest Airlines’ mandate led to the cancellation of thousands of flights earlier this month. Southwest eventually backpedaled from its original position of forcing non-compliant employees into unpaid leave.

In the field of healthcare, the controversial mandates have led to staggering losses. At the beginning of October, New York alone was poised to lose up to 70,000 healthcare workers due to the mandated shot.

A significant number of those who have refused to comply with the mandates, including those who have sued, are pro-life Catholics uncomfortable with certain vaccines’ connection to research on cells derived from aborted children.

The Vatican issued a statement in December 2020 that the Church allows for the use of vaccines connected to such research given grave circumstances such as a pandemic. However, the same Vatican statement insisted that vaccines, while permitted, “must be voluntary.”