5 Steps YOU Can Take to Protect Religious Freedom 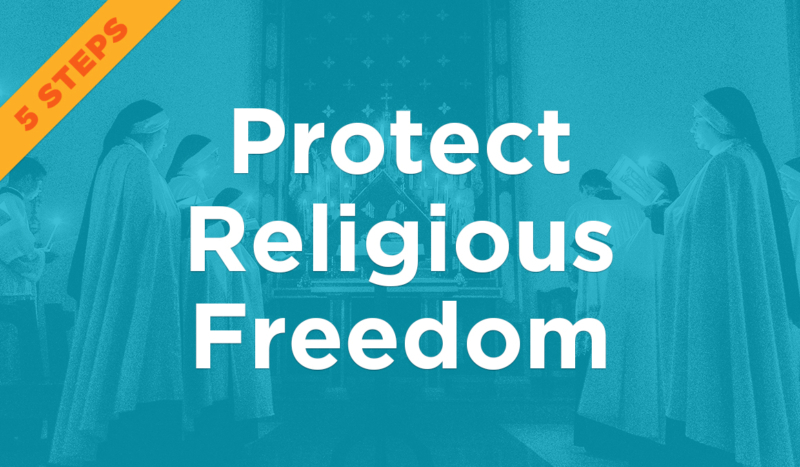 Religious freedom… is an irreplaceable factor in the good of individuals and of the whole of society as well as of the personal fulfillment of each individual.

Since then, Americans of faith have watched the gradual erosion of our First Amendment rights.

Today, many of the institutions that govern America are attempting to force us to deny our sincere religious beliefs or sacrifice our businesses, schools, and charitable work.

If you believe that laws and policies that dictate how we should speak or when and where we are allowed to act on our religious beliefs are morally wrong and unconstitutional, you’re not alone. Many Americans of diverse faiths are concerned about the future of religious freedom.

But we are not helpless. There are positive steps every American of good will can take to defend the First Amendment and the right of every human person to put God first in every aspect of his or her life.

Here are five simple steps you can take to start making a difference.

Every American should be able to recite the First Amendment. If you can’t yet, make it a goal:

Congress shall make no law respecting an establishment of religion, or prohibiting the free exercise thereof; or abridging the freedom of speech, or of the press; or the right of the people peaceably to assemble, and to petition the Government for a redress of grievances.

You should also be able to give a quick, two-minute explanation of what these words mean.  Unfortunately, most of the common one-line explanations of the First Amendment fail to capture the substance of this invaluable piece of our constitution. They go something like:

None of these explanations goes far enough.

What does it mean to “practice” a religion? Are there limits on some religious practices? Who decides those limits?

To address perhaps the most common (and most mistaken) notion about the First Amendment: If the Constitution really established a “separation of church and state,” does that mean religious elected officials can’t allow their beliefs to affect how they make important policy decisions?

The fact is that the phrase “separation of church and state” appears nowhere in the Constitution. Thomas Jefferson first coined it in an 1802 letter to the Danbury Baptist Association to address the group’s concerns that the Virginia state constitution was light on religious freedom protections:

I contemplate with solemn reverence that act of the whole American people which declared that their legislature should ‘make no law respecting an establishment of religion, or prohibiting the free exercise thereof,’ thus building a wall of separation between Church and State.

“Separation of church and state” does not bar religious people from applying the truths of their faith to public life. On the contrary, the First Amendment bars the government from establishing a state church and forcing the faithful of other religions into the margins and dark corners of society.

This shows up in “conscience clauses” or “religious freedom amendments” on bills such as the 2022 “Respect for Marriage Act,” acknowledging that some Americans object on religious grounds to, say, same-sex “marriage,” and so are given a pass because they are religious.

Religious freedom is not an exemption. It is not a way to keep personal religious views out of the public square. It is an unalienable right “endowed by the Creator.” The framers enshrined religious freedom in the “First” Amendment because they understood that religious belief is central to how citizens take part in the common life of their nation.

Incidentally, this is why founding father John Adams could say: “Our Constitution was made only for a moral and religious people. It is wholly inadequate to the government of any other.” George Washington, our first president, said likewise that “reason and experience both forbid us to expect that national morality can prevail in exclusion of religious principle.”

You can’t be the solution if you’re oblivious to the problem.

Can you explain how religious freedom is under attack? Are you aware of your town’s and state’s laws about religious speech or parental rights in education? Does your library or local school promote anti-religious ideas such as critical race theory or gender ideology?

Did you know that in some states parents can be investigated for allowing clergymen or other counselors to talk to their gender-confused children about sexuality from a traditional religious perspective? Enemies of religious freedom call that “conversion therapy.”

Additionally, in some parts of the country, pregnancy centers are not allowed to advertise their services openly. And nationwide, the Department of Justice has ignored over 80 hate crimes against Catholic churches since May 2022.

If you haven’t heard about these attacks on religious freedom, you may want to seek out a new media source, and dedicate time to educating yourself about religious freedom trends that affect you and your community.

Few of us have time in our lives to dedicate hours to this cause. But if you stay regularly informed, you will be able to mobilize quickly when necessary and join with other faithful citizens to repel attacks and promote efforts to safeguard our first freedom.

The framers of the Constitution understood that devout men and women contribute to the flourishing of society precisely because of their beliefs. Religious freedom sustains society for everyone, because citizens who publicly act according to the wisdom of the ages are better citizens: don’t kill, don’t lie, don’t steal, give to the poor, be faithful to your spouse.

Catholics have a mission that will make America better – if we are courageous enough to preach it and live it.

When you hear or see others on social media, in the workplace, or at the gym or park trashing “religious bigots,” say something. Have a few key facts ready and propose a different view of the faithful.

Don’t be afraid to share uplifting, positive stories of devout public servants or organizations. Send links out over social media, parish group emails, or even text. A simple message such as “I found this compelling!” along with a link can make a big difference!

Share the message that an America infused with freely expressed and encouraged religious values will be a better place for everyone, including those who don’t practice any faith at all.

Get Involved: Vote and Run for Office

We vote for the sake of our neighbors. We vote in solidarity with the poor, the unborn, and other vulnerable groups. Christians who vote with a well-formed conscience are protecting their neighbors’ dignity, fostering growth, and promoting the common good.

God gave us this time, this political moment in which to act. As lay Catholics, we have a duty to vote and to sanctify this great nation.

Running for public office doesn’t have to mean the U.S. Senate or Congress. Local offices can have even more of an impact on our daily lives than federal positions… and Catholics deserve a seat at the table.

Get together with friends, look at opportunities in your state or city to run, and work together to nominate strong candidates.

The good news is that thousands of people around the country are fighting every day for religious freedom. They deserve everyone’s support, because without their efforts, local, state, and federal governments would quickly suffocate our rights.

Many are involved directly in politics, working for just laws that respect conscience, religion, and families as the bedrock of American society. Find your state’s pro-freedom policy organizations through the Family Research Council. Or check out the work of national organizations such as CatholicVote, which has local and state chapters as well.

Consider contributing to the legal funds of faith-based organizations that have been sued because of their religious beliefs. Both Becket Law and the Thomas More Society provide winning counsel for landmark religious freedom cases, and rely on donations to stay in the fight.

When you shop, seek out businesses run by religious Americans – especially those in the spaces that get the most flack from the secular Left such as florists, bakers, and the hospitality industry. By giving them your business, you are also expressing your belief that they have a right to do business in this country.

Pope St. Paul VI wrote: “Man’s social nature itself requires that he give external expression to his internal acts of religion, that he communicate with others in religious matters and that he profess his religion in community.” (Dignitatis Humanae)

America will be great to the extent that her laws and people honor the full dignity of the human person. And part of that dignity is bringing our religious conviction to the public square.

When we see that liberty threatened, it is up to us to resist, speak out, and refuse to be silenced.