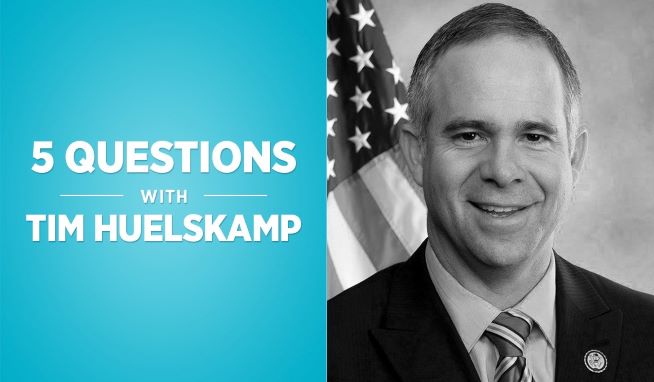 CV NEWS FEED // At CatholicVote, we encourage our followers and members to boldly witness to the truths of our faith in any way you may be called to do. Many of you already do! But for those who haven’t, have you considered volunteering for an important local political effort? What about running for office yourself?

Some of you, busy as you are raising families, running businesses, and serving your parish communities, might hesitate to get more involved. To help you think it over, we interviewed former Rep. Tim Huelskamp (R-KS), who serves as Senior Political Advisor to CatholicVote.

We’re confident his insights in the interview below will be helpful.

Huelskamp: Since 1976, our American Catholic bishops have outlined our moral obligation to vote during every presidential election. Unfortunately, these quadrennial letters understate or even overlook more critical elections and responsibilities to live out our Catholic faith in public life. Voting with a properly formed conscience is certainly a moral obligation. But, not unlike our weekly Mass obligation, this is just the minimum requirement: much more is expected of our faith.

Every day, our school boards, city councils, county commissions, other local governments, courts, and state governments impose critical political decisions upon us. While these may not be reported on the evening news or blasted out online, their policies can even more dramatically impact our daily lives and those of our families than those from Washington, D.C.

We have school boards propagandizing our children with Marxist hate and racist stereotypes. There are cities mandating the celebration of homosexual ‘marriage’ and transgender ideology. Counties are defunding the police who should protect and defend us. State legislatures and attorneys general demand that Catholic churches and religious orders pay for contraception and abortion. Just to name a few evils.

And voting against these politicians and their appointees is not enough for us. Again, much more is expected. Certainly, we should be calling, blogging, emailing, and showing up at public meetings and forums. You would be amazed at how impactful even a little publicity is on these officials. And even better, there is absolutely no reason a concerned Catholic citizen couldn’t or shouldn’t be in these offices. In fact, I believe that every single Catholic citizen in America should prayerfully consider running and serving in public office or directly assisting those who do.

Just imagine the possibilities of those who share our Catholic values focusing on these local and state officials. How about the impact of a few dozen concerned Catholics showing up at a school board meeting — and promising to run against those promoting critical race theory? Or a local Catholic parish descending on a city council demanding sanctuary for the unborn — and promising to organize against politicians defending Planned Parenthood? Or even laity across multiple dioceses promising electoral repercussions for politicians who claim our parishes are not ‘essential?’

There is an adage: If you want something done right, do it yourself. And for citizens of a republic, we can do more than clamor and complain. We can run for these offices ourselves — make these decisions for our neighbors and communities — and live out our Catholic faith in the public square. Particularly for local offices, all it may take is just one person, one concerned citizen, one faithful Catholic to run for office. And win or lose, when we stand up for our values, we impact politics, the public square, and perhaps even our eternal life.

CatholicVote: You served in the Kansas Legislature and also in Congress. What first got you motivated to take the leap and run for elective office?

Huelskamp: From my youth, I have been interested in current events and public policy. Both in my small public high school and into college, and yes even during my time in Catholic seminary, my studies reflected that interest in and a patriotic excitement about America.

It was not until 1991 though, when the “Summer of Mercy” came to Wichita, that I recognized the need for and power of active civic engagement. Along with thousands of other Kansans, Catholic and non-Catholic alike, we stood for Life and against a tyrannical federal judge and political system that promotes the slaughter of unborn children. In the heat of the summer, dozens of unborn lives were saved, and hundreds, perhaps thousands of citizens, including me, realized that we could and should live out our faith in the public square. And not just in front of abortion clinics, but in local and state government offices.

Following the Summer of Mercy, I pursued a Ph.D. in American Politics, further cementing my deep interest in politics and policy. Following completion of my degree, my wife and I returned home to the family farm in Fowler, Kansas. Just a few months later, we were encouraged by some friends — and, we believe, promptings of the Holy Spirit — to challenge an incumbent, pro-abortion state senator. To the surprise of many, I defeated the well-funded incumbent by 25 points in a Republican primary 10 months later, won the general election handily, and was sworn in as the youngest Kansas state senator in two decades.

Throughout our initial political campaign — and in multiple races in the twenty years since — I have always been open and upfront about my Catholic faith. I hoped and prayed that my faith informed and drove my actions, whether in the public square or in private. On pivotal issues of marriage, pro-life, school choice and even taxes and spending, many voters of all faiths and even no faiths recognized, appreciated, and counted on my faith impacting how I voted in public office.

CatholicVote: Having served in public office, what are some things you’ve seen firsthand that would surprise Catholics about how politics really operates close up?

Huelskamp: First, politics is very personal — especially for politicians. And for most politicians, they cannot bear to lose their office. And for all too many of them, they take themselves more seriously than the office itself.

Second, related to the first, most political decisions by elected and appointed officials are not based on fancy reports, in-depth committee hearings, years of academic study, or morals, ethics, or faith. I have seen it in thousands upon thousands of votes; politics and political decisions start with the politicians. Most votes are made on personal factors, and the most effective way to influence them is a personal, not an intellectual approach.

Third, because of the above, many politicians are very susceptible to pressure and sometimes persuasion — especially if it means they could lose their next election. And having an opponent on the ballot is often just the way to get their attention. As the old saying goes — you can’t beat something with nothing.

CatholicVote: A lot of people have never considered running for office themselves. It seems foreign or even impossible for most people. But maybe it’s not so daunting. What would it look like for a CatholicVote follower — maybe someone reading this right now — to run for office?

Yep, I understand the feeling. But only in America could a farm kid who grew up in a small town of 500 people, attended a Catholic parish of 50 families, had a graduating class of 9 students and no political connections be elected to state office and eventually Congress.

With all due respect to my hundreds of former colleagues, the job is easier than it looks. And what most politicians think are the tough issues — abortion, marriage, transgender ideology, family, race relations, immigration, religious liberty — those are really not all that complicated when informed by Catholic social teaching.

Yes, there is a massive cottage industry of political consultants, self-proclaimed experts, and institutional media that argue self-government and the election of real, ordinary people to office is not likely or not even helpful. These are the same folks who would have advised Lincoln he was too tall and awkward to win, warned Martin Luther King Jr. that his dream wasn’t possible, or threatened the Little Sisters of the Poor to simply pay for contraception and abortion.

American history, especially our hundreds of local governments, is replete with untold stories of valiant and exemplary public service by men and women just like you. Ordinary people doing extraordinary things is possible in government too.

CatholicVote: As a Catholic committed to CatholicVote’s mission, are you hopeful for the future of America? If so, what gives you that hope, and how can readers find hope themselves?

Huelskamp: If I were to answer that question based on what I see in government and public policy — the answer would be an emphatic “No.” But when I look at it in terms of our American history, the American people, and the will of God, I am very hopeful.

Never in the history of the world has an experiment in self-government survived this long — and so well. Yes, the American nation has had our stains of sin and we still wrestle with our imperfections, yet we have persisted and even prospered. As a Catholic I do know that the sins of abortion and euthanasia, pornography, attacks on marriage and family, greed and hatred of others, and the rejection of God’s sovereignty imperil our future as a nation.

But, but — we are still blessed to live in a nation that is truly a gift from on High and often a beacon of human liberty and freedom around the world.

I see many hopeful signs of a renewed America and Catholic faithful willing to enter the public square. Tens of thousands of families have now realized that they can actually do a better job teaching their kids than public schools. Despite the overwhelming silence in the hierarchy, individual priests, religious and laity are openly challenging government suppression of religious liberty. Censorship by Facebook, YouTube, Google, Twitter, and other big media is being challenged daily. Woke corporations are finding that their customers are not so keen on hating America. The anti-Catholic roots of so many state constitutions and policies are being unmasked. And after nearly five decades of Roe v. Wade, Americans are more pro-life than ever.

These signs — and many others — give me reason to hope that more and more Catholics across America will exercise their rights by running for elective office, by directly helping those who do, by fighting for eternal values in local politics, and by calling upon their Church leaders and politicians to contribute to the common good.