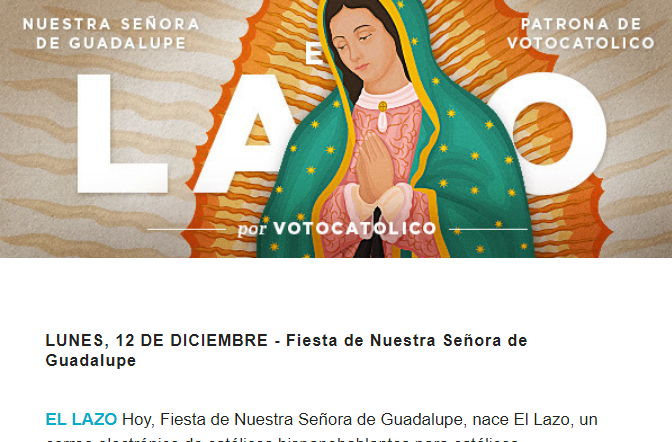 CV NEWS FEED // CatholicVote launched El LAZO – a Spanish-language sister to CatholicVote’s popular daily newsletter the LOOP – on December 12, the Feast of Our Lady of Guadalupe.

“We’re very excited to mark the feast of Our Lady of Guadalupe with the launch of these daily emails on news and religion called El LAZO to reach Spanish-speaking Catholics in the United States,” said Joshua Mercer, Editor of the LOOP and co-founder of CatholicVote.

Spanish-speaking Catholics can sign up for EL LAZO here.

The news of El LAZO comes amid a remarkable, and apparently accelerating shift toward the political right on the part of Hispanic Americans – many of whom are Catholics.

While a majority of Latinos still voted for Democrats in the 2022 midterm elections, “Republican support among Hispanic voters has grown by 10 points since 2018, continuing a dozen-year trend of America’s largest ethnic minority group drifting in a more politically conservative direction,” wrote Keith Humphreys for NBC News. “The overall arc of progress suggests that more Hispanics are going to be voting conservative in the future.”

The seismic shift has attracted the attention of both Republican and Democratic leaders. In the leadup to this year’s midterms, Democrats faced criticism for being “tone-deaf” in their hurried efforts to pull American Latinos back toward the Left. Democratic claims that Republicans were propagandizing Hispanics with “disinformation,” for example, drew accusations that liberal leaders do not believe Hispanic voters are capable of discerning their own political interests.

Billionaire leftist George Soros, meanwhile, recently made an indirect purchase of 18 Spanish-language AM and FM radio stations, reportedly in the hopes of influencing ethnic minorities to vote blue.

“He wants the Hispanic community to forget about God and family values,” said Latina Congresswoman Maya Flores, R-TX, in response to news of Soros’ coming radio buy. “I’m calling on the Hispanic community. Fight for your abuelo’s values — fight for your parents’ values that were instilled in you that live in us, and instill those values into your kids and into your grandkids,” she said.

And family, God, and faith do seem to play a prominent role in the growing Hispanic rejection of the Democratic Party’s secular leftism.

“All Catholics in the United States face a biased media that constantly attacks our faith and our families,” Mercer said. “That’s why we launched the LOOP in 2015.”

The LOOP’s success has skyrocketed since then as Catholics grew to love the down-to-earth and straightforward style of the daily news roundup. “The response has been enormous. We currently have 340,000 daily subscribers to the LOOP,” Mercer said.

“But Spanish-speaking Catholics in the United States also need news and information they can trust,” he continued. “That’s why we launched El LAZO.”

“We will speak Hispanic to Hispanic, but, above all, Catholic to Catholic,” said Jaime Manning, Editor of El LAZO. “Because, even though we will talk and feel in Spanish, even though we are united by language and culture, the common language will be the same as the language of the LOOP: our faith.”

Spanish-speaking Catholics can sign up for EL LAZO here.