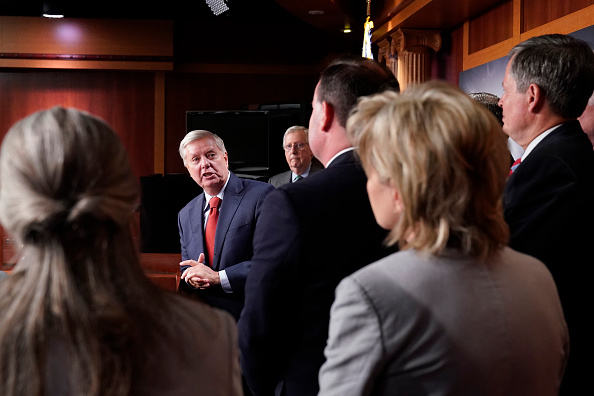 CV NEWS FEED // Big donors and other influential figures are lobbying Republicans to ‘moderate’ their positions and cooperate with Democrats on immigration legislation, according to a new report from Politico.

“A number of current and former GOP donors are taking aim at Republican senators, accusing them of picking partisan gamesmanship over good-faith efforts to work on immigration reform,” Politico’s Olivia Beavers wrote.

These Republican donors are particularly critical of Sen. Lindsey Graham, R-SC, “who was originally in the 2013 gang of eight that sought to address the overloaded U.S. immigration system,” and Sen. John Cornyn, R-TX, Beavers wrote. “They want Graham and Cornyn to press Senate Minority Leader Mitch McConnell (R-KY)” to take up the Dream Act (originally cosponsored by Graham), the Farm Workforce Act, and “Cornyn’s own bill that he has cosponsored with Democratic Sen. Kyrsten Sinema (D-AZ) titled the ‘The Bipartisan Border Solutions Act.’”

Other Republican beltway influencers are also putting the pressure on. Board members of the American Business Immigration Coalition (ABIC) “have spoken to 41 Republican senators about the bills,” Beavers reported:

Some who describe themselves as lifelong Republicans say they may start voting across party lines if they don’t see the party bend on immigration. Two Republicans who spoke to us threatened to withhold financial support: Cuban-American billionaire Mike Fernandez, a former Republican turned independent who’s previously donated millions to GOP candidates, and Bob Worsley, a former GOP State Senator in Arizona.

John Rowe, a very wealthy GOP donor, told Politico he finds it “frustrating” that Graham will not listen to his call for a more moderate stance on immigration reform. “The people who have been there on the issue for a long time, like Lindsey Graham, are nowhere to be found at the moment,” Rowe said.

“Some donors are also encouraging Democrats to simply go it alone through reconciliation on immigration if Republicans can’t get on board,” Beavers concluded:

But this push is an uphill battle, at least right now. Republicans have been increasingly leaning further right on this issue, demanding big changes to border security, including building Trump’s border wall, before they come to the negotiating table.

A number of conservative commentators reacted negatively to the news of the donor-class push for Democrat-backed amnesty and guest worker bills at a time when the border crisis continues to worsen under the Democratic Biden administration.

Writer Varad Mehta found it laughable that the “GOP donor class” is “acting like it’s still 2015.”

“All they care about is cheap labor and the bottom line,” wrote Twitter user Danny. “The GOP donor class needs to be repealed and replaced.”

“One reason the GOP is so hard to change is because it is beholden to donors who care more about their bottom lines and their ethnic interest groups than they do about America as a whole,” wrote Pedro Gonzalez of Chronicles Magazine. “To change the GOP, you’re also going to have to go to war with these donors.”