DeSantis vs. Biden: Florida Governor Hits Back at Biden over Vax Mandate 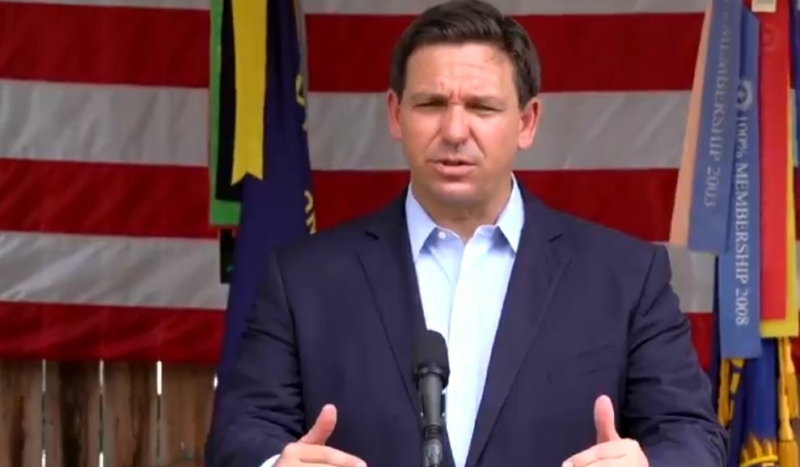 CV NEWS FEED // While promoting his controversial call for private employers to enforce vaccine mandates against their employees, President Biden sharply criticized Gov. Ron DeSantis, R-FL, for insisting on leniency when it comes to COVID policies.

In particular, Biden criticized DeSantis for banning school mask-mandates in his state, and threatening people in positions of authority (such as school administrators) with fines and salary suspensions if they attempted to force people under them to wear masks or get vaccinated.

“I am so disappointed that particularly some of the Republican governors have been … so cavalier of the health of their communities,” Biden said Friday. “We’re playing for real here. This isn’t a game.” Alluding to DeSantis personally, the president later added:

Right now, local school officials are trying to keep children safe in a pandemic while their governor picks a fight with them and even threatens their salaries or their jobs. Talk about bullying in schools.

When a reporter later asked DeSantis about the president’s comments, the governor responded with a thorough critique of Biden’s “unconstitutional” attempts to threaten the livelihoods of non-conforming citizens.

“I would just say, generally, when you’re taking action that’s unconstitutional, that threatens the jobs of the people in my State — many many thousands of jobs — I’m standing for them,” DeSantis said. “We’re gonna protect their jobs against federal overreach.”

Regarding the president’s criticism of the Florida ban on mask mandates, DeSantis said: “…this is a guy who criticizes the State of Florida for protecting parents’ rights. He says school boards should be able to eliminate parents’ rights and force five-year-old kids to wear masks all day. That’s what he thinks is appropriate government.”

“Yet, here he comes from Washington, DC, instituting an unprecedented mandate which even his own people have acknowledged in the past is not constitutional. That’s not leadership,” DeSantis continued:

And I think the problem I have with Joe Biden more than anything: this guy doesn’t take responsibility for anything. He’s always trying to blame other people, blame other states… This is a guy that promised when he ran for president that he would shut down the virus. If you look now there’s 300 percent more cases in this country today than a year ago when we had no vaccines at all. So his policies are not working. He’s doubling down on things that are gonna be very destructive for the livelihoods of many many Americans, and obviously gonna be destructive to our constitutional system and the rule of law. And so these are times when if you believe in that constitution you gotta stand up.

DeSantis not only expressed concern for citizens who would be forced out of work if Biden’s mandate succeeds, but also critiqued the president’s COVID policy as unscientific. “Obviously the substantive issue is important because there are places that are gonna toss aside people who [have] worked this whole time throughout COVID,” DeSantis said. “Now all of a sudden they should be tossed aside? They were working when nobody had vaccines. You don’t know their history, you don’t know why they’re making decisions that they’re making.”

“Many of these people have already recovered, and they have immunity,” he pointed out:

DeSantis also called out the president for saying in his announcement calling for a national vaccine mandate that “our patience is wearing thin.”

“He’s saying he’s ‘losing patience with people,’” DeSantis said. “You know at the end of the day we don’t live with a one-person rule in this country. We live in a constitutional system in which people’s rights are respected.”

“But particularly in this juncture, their livelihoods and their jobs have to be protected,” DeSantis continued:

I mean just think about what this mandate would do. It’s gonna drive people out of work, out of hospitals, out of all this stuff … where you have a need for people. So it’s totally counterproductive.

The governor concluded that he believes Biden’s attempt to force private employers to mandate the vaccine will “ultimately lose in court. But,” he added, “before that, there needs to be action taken to protect the people of our state, and hopefully the entire United States.”

“Nobody should lose their job based on this decision,” DeSantis concluded.

Readers can watch DeSantis’ comments in the video below.