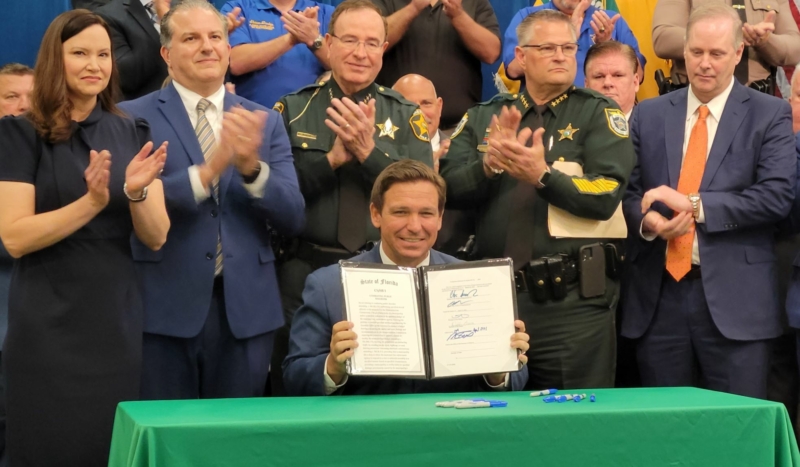 The new law empowers citizens victimized by riots to sue local government officials for failing to protect them or their property, creates stronger penalties for rioting, and more strictly defines rioting to include assemblies of as few as three people acting together to do harm. The bill also restricts local politicians’ power to defund police forces, and increases penalties for defacing or toppling historical monuments.

The legislation “makes clear that rioting and violence have absolutely no place in Florida and provides protections for the brave men and women who keep our communities safe,” DeSantis stated on social media.

“If you riot, you are going to jail,” DeSantis said. “If you assault law enforcement in a violent assembly, you are definitely going to go to jail.”

He also spoke out against anyone who would “burn down somebody’s business,” promising that, in Florida, “the penalties are going to be very swift and immediate.”

DeSantis signed the bill into law on the same day riots exploded once again in Minnesota over the trial of former police officer Derek Chauvin for the death of George Floyd. The thematic connection was not lost on many commentators.

“This is the rhetoric we should be hearing from all elected officials,” tweeted Rita Panahi.

Mike Davis called DeSantis’ signing of the bill “Real leadership for other Republicans to follow.”