DeSantis Joins CatholicVote in Rally for Faith, Family, and Freedom 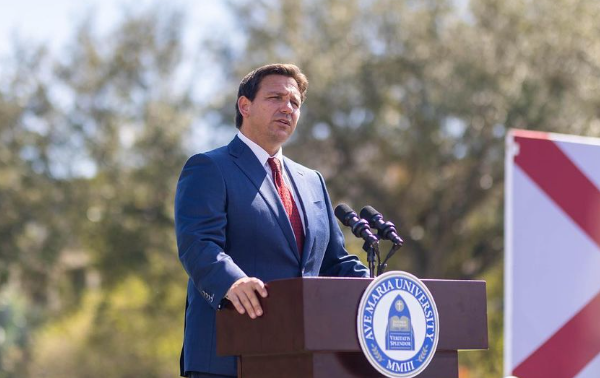 DeSantis also spoke of Florida’s rejection of other states’ COVID lockdowns, educational shifts toward “woke” gender ideology and racialism, and aggressive “green energy” policies. He tied those bold policy stances to the influx of new residents and businesses from other states.

“That is people voting with their feet,” he said. And while some might believe corporate media commentators, who often tout states like California and New York as models while denigrating Florida, “most believe their own eyes,” he added.

DeSantis spoke in detail about a wide variety of issues voters will have in mind as they cast their votes on November 8 – from economic and “green” policies to the human rights crisis at the United States’ southern border, where he said migrants are brutally mistreated.

DeSantis emphasized the importance of maintaining well-trained law enforcement, touting Florida as a “law and order state” and decrying the “defund-the-police” rhetoric of Democrats in areas which, he pointed out, have fallen victim to remarkable spikes in violent crime.

He pointed out that under his leadership, Florida public schools were protected from the long-term lockdowns that kept children in many other states out of school for as long as a full year.

In that matter, studies have unanimously found – and mainstream journalists even on the political Left have conceded – that Democrat-led COVID policies gravely harmed children’s mental health and educational development. “We have the receipts,” DeSantis said, citing authoritative studies showing Florida school children surpassing other states’ in educational metrics.

DeSantis was perhaps most animated when addressing the issue of parents’ rights. Parents have the right to send their children to public schools, and for that matter to let them “watch cartoons and just be kids,” without having to deal with progressive agendas being “shoved down their throats,” DeSantis said. In Florida, he vowed, kids can go to school “without being told they were born in the wrong body.”

DeSantis’ Parental Rights in Education Act, passed earlier this year, came under ferocious attack from both Democratic leaders and leaders in the corporate world. The result was a massive backlash from parents, with some surveys finding that even most Democrat parents approved of the contents of the legislation and disapproved of powerful corporations pushing gender ideology on children.

Democrats now know better than to run for office on the promotion of gender ideology against the wishes of parents, DeSantis said, pointing out that polling shows they would lose hands down.

When he introduced the governor, CatholicVote’s Brian Burch also mentioned the stream of migration Florida has seen from blue states since the governor’s election. The ongoing demographic shift, which has frustrated and embarrassed Democratic governors and their allies in the media, is not only a result of lower tax policies and sunny weather, Burch contended.

It is because DeSantis, a Catholic himself, has led according to the true principles that Catholic teaching promotes – principles of natural law that work for the common good of all, not only the interests of the institutional Church.

“If we are to take seriously the call of the Gospel to go forth and make disciples of all nations, then no corner or crevice of humanity can be ignored. Even to the ends earth, he summoned us,” Burch said:

But politics, it’s worldly. It involves power. And Twitter. And people doing and saying really dumb things. But for us Catholics we know we are called to renew all things – even political things. But it’s not easy. In doing so we are often accused of being divisive or trying to impose our religion on others or – lately – of being a force of oppression, patriarchal, racist, sexist, unscientific, homophobic.

Those who make such accusations “couldn’t be more wrong,” Burch said. Catholic teachings on issues like “the sanctity of life, marriage, the foundational role of the family, order and liberty, parental rights, the preferential option for the poor, stewardship of the environment, and the dignity of every human person” were not contrived “in some smoke-filled room in the Vatican,” Burch said. “They are grounded in science, philosophy, ethics – natural law. In sum, they are what the word Catholic means: Universal.”

“Despite what the media says, what we profess to believe about our civic life, the importance of religious belief, and morality is not some sectarian goofy Catholic thing,” Burch said. “Call us crazy, but the principles that guide our faith are true because we believe they lead to the greatest possible human happiness and flourishing.”