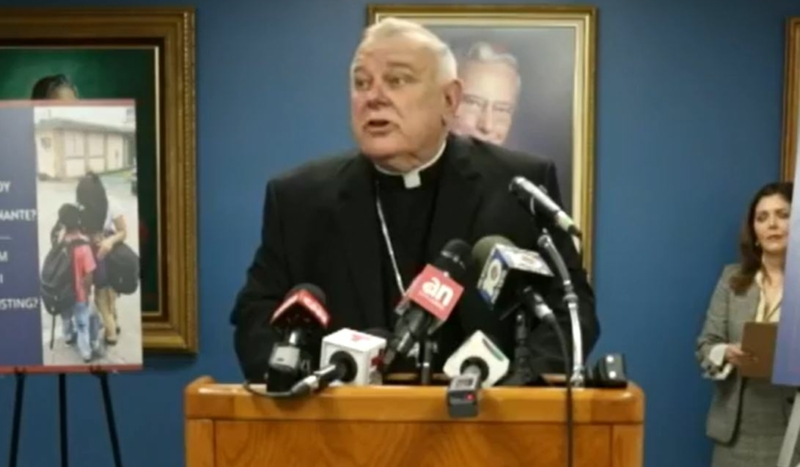 CV NEWS FEED // Archbishop Thomas G. Wenski of Miami in a Feb. 10 presser blasted Gov. Ron DeSantis, R-FL, and accused him of calling unaccompanied minors at the border “disgusting.” The accusation appears to be based on an inaccurate talking point currently being spread by an attack ad, however, and a spokesman for DeSantis told CatholicVote Tuesday that Archbishop Wenski should “immediately” retract it and apologize.

Wenski said that DeSantis had hit a “new low” by calling migrant children “disgusting.” “Children are children — and no child should be deemed ‘disgusting’ — especially by a public servant,” the archbishop said.

The American Business Immigration Coalition has used similar rhetoric to condemn DeSantis. On Monday, a Spanish language attack ad along the same lines began airing on radio stations in the greater Miami area. The ad is titled Repugnante and features a woman saying in Spanish, “Repugnant?! Repugnant! That is Governor DeSantis trying to benefit himself politically by attacking immigrant children…”

A spokesperson for Gov. DeSantis told CatholicVote: “Coverage of the ad and the basis of the ad intentionally defame Governor DeSantis by misquoting remarks the Governor made at an event last week at the Museum of the Cuban Diaspora in honor and in celebration of immigrants who arrived in the United States as children.”

“The ad is based on a knowingly false premise,” the spokesperson said:

Gov. DeSantis did not call unaccompanied minors “repugnant” or “disgusting.” He said: “I just think there’s a lot of bad analogies that get made in modern political discourse. But to equate what’s going on with the Southern border with mass trafficking of humans, illegal entry, drugs, all this other stuff with operation Pedro Pan, quite frankly, is disgusting. It’s wrong. It is not even close to the same thing.”

Operation Pedro Pan was a successful effort in the 1960’s to help thousands of children flee the Communist regime in Cuba by coming to the United States. DeSantis’ has recently contrasted that event with the current humanitarian crisis at the border, in which countless children have gone missing in the chaos, and cartels and people smugglers are taking advantage of the disorder in order to traffick women and minors.

Along with DeSantis, numerous migrants who escaped Cuba with the help of Operation Pedro Pan have also condemned the Biden administration’s handling of the current border crisis. Like DeSantis, these Cuban expats speak against border insecurity in humanitarian terms.

“What is happening right now, you see children as merchandise and these cartels are using these kids as merchandise for personal gain,” said Maximo Alvarez, a beneficiary of Operation Pedro Pan, at a Feb. 7 event with DeSantis. “When I came, we came directly into the hands of the church, and we were treated like family.”

Archbishop Wenski harshly dismissed the distinctions drawn by migrants like Alvarez, discounting their expressions of concern for today’s child migrants and framing their appeals as antagonistic to immigrants.

“Even while recognizing the good care afforded them by Catholic Charities 60 years ago, they begrudge that same care being extended to migrant children today,” Wenski said. “Msgr. Bryan O. Walsh, the revered father of the Operation Pedro Pan, is rolling over in his grave.”

DeSantis’ office Tuesday drew a connection between Wenski’s talking points and the “disingenuous” attack ad. Wenski, local media, and business leaders have all advanced the same narrative as the ad, but DeSantis’ spokesperson says the narrative is based on “defamatory” misinformation.

“This ad should be immediately retracted and the Archdiocese of Miami and American Business Immigration Coalition should apologize for spreading misinformation,” the spokesperson said:

The Archbishop of Miami’s claims are defamatory and anyone running this narrative, including supposed journalists at the Miami Herald, is also participating in defamation.
The Biden Administration is literally incentivizing children to take unsafe and treacherous voyages, sometimes across multiple countries, often under the “supervision” of drug cartels.

Leaders of the official Pedro Pan organization, including Alvarez, quoted above, and Carmen Valdivia, both of whom joined Gov. DeSantis at his Feb 7 roundtable, “have debunked this claim,” the spokesperson pointed out.

Alvarez and Valdivia have also contended “that three supposed Pedro Pans quoted in a Miami Herald article titled Cubans who arrived through Pedro Pan oppose DeSantis’ immigration orders were not Pedro Pans and one of them has longstanding ties to groups opposed to Gov. DeSantis.”

“The overarching accusation coming from Archbishop Wenski, the ABIC, and their activist allies that Gov. DeSantis does not respect human dignity and the safety and wellbeing of children could not be further from the truth,” the spokesman continued:

Since taking office in 2019, Governor DeSantis has been a consistent and vigorous advocate for Florida’s children. Under the DeSantis administration, Florida has provided record funding for education, supported adoption and foster care by adding 4,000 additional licensed caregivers and providing a $300 monthly stipend for foster families for daycare, and increased funding for school mental health programs by more than $45 million annually. Governor DeSantis will continue to fight for Florida’s children and remains dedicated to making sure they have every opportunity to succeed.

“The Archbishop should immediately retract his claims and acknowledge the record funding and accomplishments that the DeSantis administration has secured to support children,” the spokesperson concluded.