Democrat Uses Our Lady of Guadalupe in Pro-Abortion Campaign 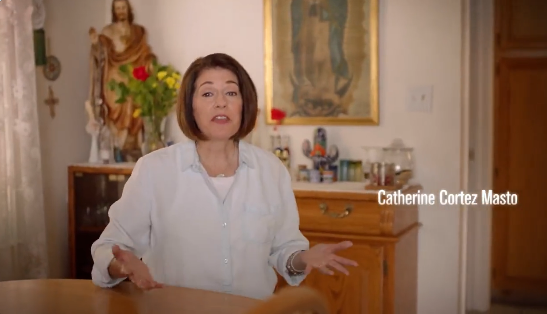 CV NEWS FEED // A new campaign ad from pro-abortion Catholic Sen. Catherine Cortez Masto, D-NV, features her with a statue of the Sacred Heart of Jesus and an image of Our Lady of Guadalupe behind her.

The video presents Cortez Masto as deeply traditional, pro-family, and religious in an apparent bid to win over Catholic and Hispanic voters ahead of the November election.

“I grew up hearing our family stories from my cousins and tias around my grandparents’ dinner table – everything I am is thanks to them,” Cortez Masto wrote in an introduction to the video ad on social media. “I’ll never forget where I come from – it’s what drives me to fight for our families every day.”

Despite the pious image Cortez Masto projects in the new ad, the Nevada Democrat recently spoke strongly in support of unrestricted abortion in the aftermath of the Supreme Court’s June decision to repeal Roe vs. Wade and return abortion legislation to state lawmakers. The decision was “devastating” and “absolutely unacceptable,” Cortez Masto said on the day of the ruling.

Cortez Masto is widely considered the most vulnerable Senate Democrat up for reelection this year. Republicans need to flip just one seat to capture control of the Senate.

In September, Cortez Masto followed the call of Sen. Elizabeth Warren, D-MA, for Democrats to shut down independent women’s care clinics – many of them run by Catholics – that do not offer abortions. Warren called such support centers “fake clinics,” baselessly accused them of “torturing” women, and proposed legislation to “crack down” on them.

Warren’s proposal would empower the Federal Trade Commission to shut down pro-life charities that help women in crisis pregnancy situations. Cortez Masto signed on as a co-sponsor of the legislation.

Cortez Masto also sponsored the so-called Women’s Health Protection Act, which would ban state lawmakers from passing any regulation of abortion (all the way up to birth) throughout the United States. The legislation would also void all existing abortion restrictions in every state – including parental notification laws, and would force taxpayers to fund abortions.

“It’s shameful at this point for Senator Cortez Masto to even call herself a Catholic,” said CatholicVote Communications Director Joshua Mercer in response to the new campaign ad. “But to use the sacred images of our faith as props while pushing a radical agenda that she knows Catholic voters would reject if she said them out loud? That’s a new low.”

Mercer added that Catholic voters should know that Cortez Masto’s opponent, Adam Laxalt, is a pro-life Catholic. “Laxalt’s position on abortion is not only more in agreement with most Catholic voters, but most Americans – including Democrats!” Mercer noted:

I think everyone’s waking up to the fact that voters have had it with the Democratic Party’s new extremism on abortion. And it’s no surprise that politicians like Cortez Masto – who won’t support ANY limits on abortion at all and wants taxpayers to fund it – are now resorting to outright deception. After all, if she were honest about the radical abortion agenda she represents, she’d have no shot at all in November.