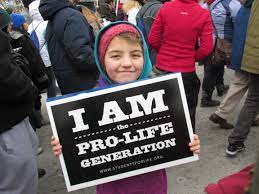 “The crowd outside the Court included the whole gamut of pro-life representation,” McClusky said. He saw everyone from “Catholic nuns to a young woman who identified as a ‘queer Latina feminist rape survivor against abortion.’”

“Most if not all pro-life organizations” were present, McClusky said, “so of course CatholicVote was there.”

“There were many great pro-life speakers,” McClusky noted, but “just like at the national March for Life every January, the real attraction is the wonderful crowds.”

McClusky saw both pro-life and pro-abortion demonstrators, but said “the pro-life forces outnumbered the other side by almost 30-1.” The overall atmosphere “showed the ever-present optimism seen at so many pro-life gatherings – however it was clear this crowd sensed a major shift is coming,” he said:

Everyone I talked to knew what type of decision they expect when the Court makes its decision in 2022. The optimism was everywhere, with many people talking about what comes next.

In the leadup to Wednesday’s hearings, the Biden administration has involved itself aggressively in propping up the abortion industry against pro-life legislation in a number of states.

When Texas passed its Heartbeat bill limiting abortions after a heartbeat can be detected, President Biden vowed to unleash a “whole-of-government” campaign to stop legislation that he described as running counter to Roe v. Wade.

In December, CatholicVote President Brian Burch launched a campaign to get Catholics to pray in Adoration (in the presence of the Eucharist) for the outcome of the Dobbs case. More than 1,000 parishes participated nationwide.

“Earlier this week, pro-abortion New Hampshire Senator Jeanne Shaheen threatened the Supreme Court in regard to the upcoming Dobbs hearing,” McClusky said. He was referring to Shaheen’s remark: “I think if you want to see a revolution, go ahead, outlaw Roe v. Wade and see what the response is.”

“I don’t know where Senator Shaheen has been for the last few decades,” McClusky said, but “if she looked out her Senate office window on Wednesday, she would have seen the continuing pro-life revolution that has existed for over forty years.”

One question the Court must consider now is whether it is “proper for the Supreme Court to continue having our judicial system act as some sort of medical review board” for the whole nation,” McClusky said. “If you asked the few thousand or so people in front of the Supreme Court today,” they would answer “no,” he said. “It is time to get rid of Roe.”