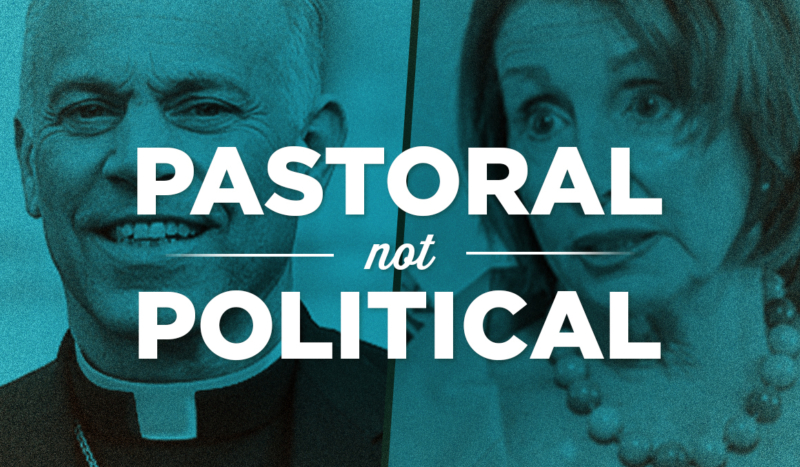 Moments ago, Speaker Nancy Pelosi’s archbishop – Archbishop Salvatore Cordileone of San Francisco – announced that he has barred her from receiving the Eucharist due to her public and persistent activism in favor of abortion.

I suspect you may be thinking: it’s about time.

No doubt, this announcement is welcome. And yet it is not ultimately about politics or punishment. It’s about repentance, obedience, and the responsibility of every Catholic (including us!), but especially those in leadership or prominent lawmaking roles to uphold the timeless teachings of the Faith that we profess.

CONSIDER: Church law requires this. Canon 915 of the Code of Canon Law states clearly: “Those who have been excommunicated or interdicted after the imposition or declaration of the penalty and others obstinately persevering in manifest grave sin are not to be admitted to holy communion.”

Archbishop Cordileone had no choice.

I have no doubt that Archbishop Cordileone’s action was not undertaken lightly. In his public statement he cites his own repeated attempts to reach out to the California Democrat. She has refused to respond. And of course, since the Dobbs decision leak, she has doubled down on nearly two decades of public, unwavering support for abortion, while repeatedly citing her Catholic faith.

FACT: Every shepherd of the Church has been given the solemn responsibility to teach, govern, and sanctify. The laws of the Church are clear. This action by Pelosi’s archbishop is intended to be medicinal – not vindictive. It is intended to invite her to repentance, so that she might return to full communion with the Church.

And we must pray fervently that she will do just that.

I understand the sense of long-overdue justice. Our spiritual family has suffered tremendously because of the repeated assaults on our Church by public officials who openly flaunt her teachings and give scandal.

But I also know that this is not a time for celebrating. We cannot, and should not, celebrate anyone choosing to separate themselves from the life of the Church.

For this reason, I hope you will join me in three specific prayer requests:

– First, pray for Nancy Pelosi. Pray that she might respond to this invitation of repentance. The Holy Spirit doesn’t give up on anyone.

– Second, please pray for Archbishop Cordileone. No doubt he will be attacked by some even in our own Church, let alone the pro-abortion forces now on the march. This is a spiritual battle and he needs our prayers now.

– Third, let’s all pray for all pro-abortion Catholic politicians and their bishops.

St. Thomas More, pray for us.

The June 2021 poll also showed that 74% of Mass-attending Catholics say these officials should not present themselves for communion. Click here to read more about the findings of this poll.