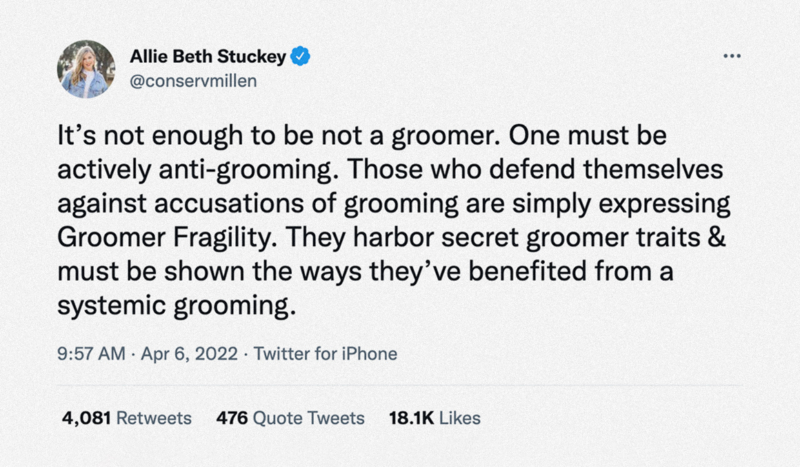 CV NEWS FEED // After commentators on the political Left accused conservatives of “homophobia” and “slander” for using the word “groomer” to describe opponents of legislation to prevent discussing “sexual orientation” and “gender identity” with young children in schools, conservative podcaster Allie Beth Stuckey turned the tables.

Using the framework of mainstream progressive rhetoric about racial and other cultural issues, Stuckey confronted those who suggested it was inappropriate to accuse LGBTQ educators of “grooming.”

“It’s not enough to be not a groomer. One must be actively anti-grooming,” Stuckey wrote in a series of tweets:

Those who defend themselves against accusations of grooming are simply expressing Groomer Fragility. They harbor secret groomer traits & must be shown the ways they’ve benefited from a systemic grooming.

“Silence is violence when it comes to the grooming of children,” she continued, again echoing the “anti-racism” rhetoric of the Left. “Unless you are actively working to dismantle the systems of grooming, you are upholding the institutions that have oppressed children for centuries.”

Stuckey went on to call on society to “stop centering groomers” and “establish anti-grooming policies and programs,” including an “Anti-Grooming Task Force, in which unelected anti-grooming activists determine whether institutions are sufficiently anti-grooming.”

As for Christians, Stuckey wrote, “if your pastor isn’t teaching anti-grooming sermons, you need to find a new church. He is upholding Groomer Supremacy & is on the wrong side of history. The church has a long history of supporting or ignoring grooming. Do. Better. Church.”

Borrowing from the anti-police rhetoric of the Black Lives Matter movement, Stuckey added: “Public school can’t be reformed. It must be defunded & dismantled. Abolition or bust.”

“We must also reimagine a society in which the nuclear family, fathers especially, are the biggest influence not just in their child’s life, but in society,” Stuckey wrote. “We must recognize the role Toxic Matriarchy has played in upholding systemic grooming.”