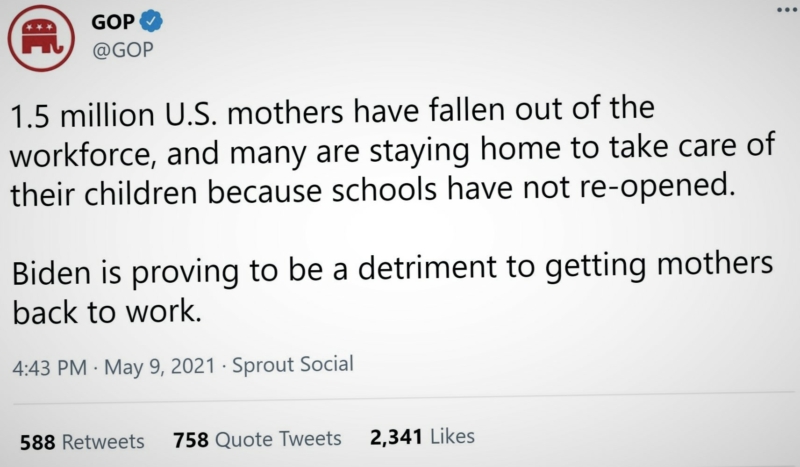 “1.5 million U.S. mothers have fallen out of the workforce, and many are staying home to take care of their children because schools have not re-opened” the Republican account tweeted on Mother’s Day. “Biden is proving to be a detriment to getting mothers back to work.”

Many conservative commentators, however, rejected the message.

“We reject this narrative,” replied Elijah Schaffer of The Blaze. “More moms at home. Not less.”

“This was one of the great symptoms of the more horrible social impact of the unnecessary lockdowns,” Schaffer argued. “Are you this out of touch with the populace?”

“‘Get mothers back to work’ is the opposite of the conservative agenda,” tweeted Matt Walsh of The Daily Wire.

“So many mothers go to their death bed thinking, ‘if only Joe Biden didn’t force me to spend more time with my kids’” chided Ryan James Girdusky.

“‘Stay at home moms are bad’ wasn’t a take I expected but hey life is full of surprises,” tweeted Mike Cernovich.
“Did someone hack @GOP to post anti-motherhood tweets on Mother’s Day?” asked Jack Posobiec.