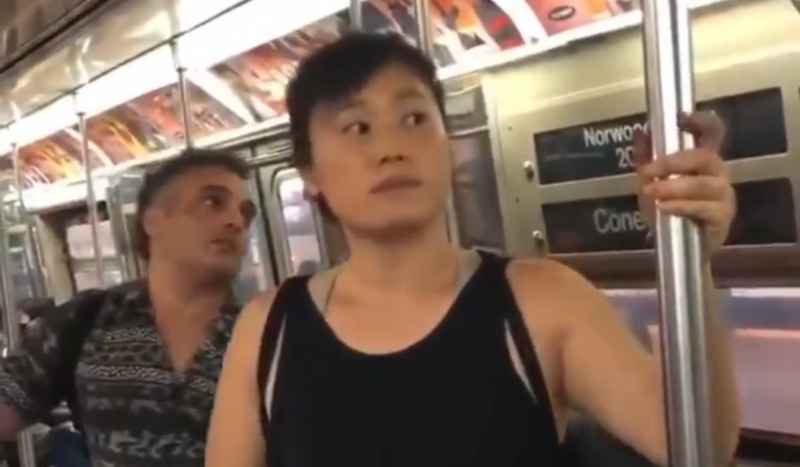 CV NEWS FEED // Onlookers filmed an unidentified woman tearing down explicit and LGBT-themed advertisements on a New York City subway train. The woman warned the general public against “propaganda” as she ripped down the ads. Several passengers praised her and thanked her.

“All of this is gross,” the woman said, tearing a corner off of one ad. “For our kids to be looking at this? Is that okay? This is propaganda. It’s affecting the next generation. I don’t know why, like, no one sees this. This is disgusting.”

The woman who had begun by tearing down only part of one ad then ranged through the subway car, tearing down numerous other ads. “Nicely done,” said the other woman. The man, meanwhile, helped tear down ads.

Continuing to remove the posters, the woman warned that there are forces who want to “divide and conquer us.” “You think you can just take the vaccine and this will go away?” she asked. “This is never gonna go away until we the people say we don’t want this anymore.”

“Thank you!” a woman replied.

“Watch and learn,” said the woman filming, addressing fellow passengers. “That’s what bravery looks like. Say no to propaganda!”

“This is not about equality, guys,” said the first woman. “This is about communism.” “They’re coming for your children, folks,” the man said.

It is unclear from the video what the texts of each of the ads said, although the images on the posters were clearly explicitly sexual — arguably obscene. It is also clear that at least some of the ads were part of an advertising campaign from dating site OKCupid, which the company billed as being “inclusive” and “affirming” of LGBT ideology.

Images included depictions of orgiastic behavior between many people of both sexes, and several computer-enhanced images of unnatural contortions of a sexual nature.

One poster showed two people of the same sex with unnaturally long tongues, which were fused together, and the word “pansexual” was featured prominently beside them.

Another ad depicted a woman on the floor and being stepped on by several other women in high-heeled shoes, along with a text inviting “every single submissive” person to OKCupid’s site.

Two videos of the woman taking a stand against the posters went viral on social media, racking up over 30,000 “likes” on Twitter as of Thursday night.

Matthew Schmitz, Senior Editor at the intellectual journal First Things, also lent credence to the woman’s bravery, pointing out what she was up against. “Visual assaults on the subway used to come from graffiti scrawled by miscreants,” Schmitz explained. “Now they come from ad campaigns put out by major corporations and approved by public authorities.”

“People like this are the only hope,” wrote author Lewis Ungit. “Samson is a hero in the bible not because he was perfect (he was not) but because he fought for God. We will be judged for not fighting.”

“This is exactly the correct response to this kind of insane filth,” wrote pundit Matt Walsh. “No more tolerance. No more being polite. Live your convictions or bow to your new masters. Those are the only options left to us.”

“Stand up for children,” tweeted pro-life advocate Lila Rose. “This woman is awesome.”

Free speech advocate Dave Rubin, who is gay, also approved. “Can say after a few days in NYC that there still is a real fighting spirit here,” he wrote. “Way better than the docile brainwashed clones of Los Angeles.”

Readers can watch the incident in the videos below. (Warning: Some harsh language.)