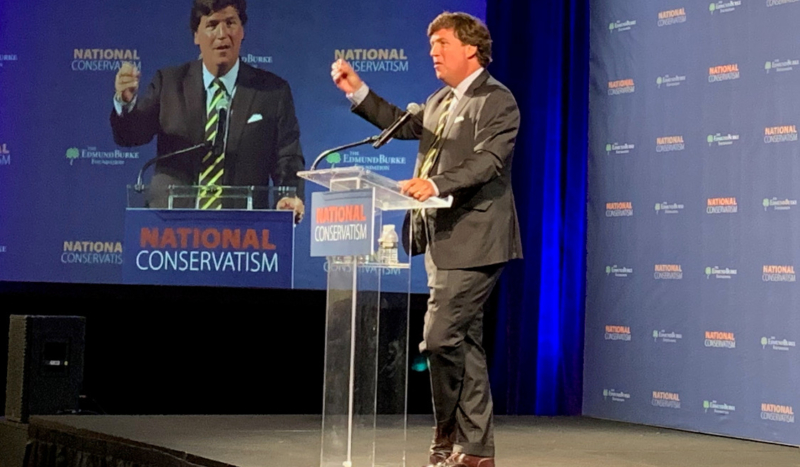 Where is the conservative movement headed in the Trump era?

Should conservatives embrace the new nationalism that has erupted in Europe and in Donald Trump’s campaign to make America great again?

Or should they, as prominent conservative intellectuals William Kristol and George Will insist, reject it as atavistic nativism?

And what about the free market?

The biggest proponents of open border policies today are doctrinaire libertarians who once dominated so-called movement conservatism but who are increasingly viewed with skepticism.

To answer these and many other questions, more than 500 conservative activists, writers and members of the dissident Right gathered this past week at the Ritz Carlton Hotel in Washington, DC, for the first annual National Conservative Conference.

Organized by the newly formed Edmund Burke Foundation, the conference was hosted by the friends, family and supporters of the Israeli political philosopher Yoram Hazony, author of The Virtue of Nationalism, a surprise 2018 bestseller in conservative circles.

The conference drew a surprising number of big name speakers.

Fox News TV host Tucker Carlson was a keynote speaker, bringing his unique brand of everyman populism and self-deprecating humor to the event.

“In what way exactly is diversity our strength?” Carlson asked in a typical outburst, to howls of audience laughter. “Is that true in your marriage? Do you have a stronger marriage when you have nothing in common with your spouse?”

According to Hazony, the purpose of the conference was to work out precisely what a nationalist movement – shorn of racial identity politics – might look like today.

The choice before the world, he argued, is between a community of unique nations each pursing their own destinies and values… or an imperialistic globalism that seeks to turn the entire world into a giant market in the service of multi-national corporations and unelected transnational organizations.

Countries and peoples are better off, he claimed, when they can pursue their own interests and not be swallowed up by empires that always promise peace and prosperity but end up making slaves of all.

A soft-spoken intellectual and father of nine children, the youthful-looking, bespectacled Hazony was born in Israel in 1964 but attended Princeton University as an undergrad (founding the Princeton Tory as a student) and then earned a Ph.D. in political philosophy at Rutgers.

After his studies, Hazony returned to Israel where he founded the Shalem Center in 1994 and then, more recently, the Herzl Institute.

Hazony and the other conference organizers – such as the lawyer David Brog — repeatedly emphasized their categorical rejection of ethnic identity as a basis for nationalism. In the world of right-wing politics, they are civic nationalists strongly opposed to ethnic- or white nationalism.

As a result, attendees were carefully screened in advance, presumably through their writings and social media accounts, before being allowed to attend the conference.

At least two famous “race conscious” nationalists – Peter Brimelow of the website VDARE.com and Jared Taylor of American Renaissance – complained in print when their applications to attend the conference were rejected.

Yet this didn’t mean that the group didn’t have its fair share of controversial, outspoken characters.

The anti-democracy thinker Curtis Yarvin, aka Mencius Moldbug, the founding prophet of the neo-reactionary “dark enlightenment” Internet community that erupted in the mid-2000s, was in attendance.

Amy Wax, the neurologist and attorney who has been an outspoken critic of both political correctness and mass immigration, and has herself been the subject of student protests and attempted bannings, spoke in favor of strictly limiting immigration.

The most controversial speaker was undoubtedly Ambassador John Bolton, current National Security advisor in the Trump Administration and widely considered a “hawk” on U.S. foreign policy.

Because many attendees were skeptical of the nation-building, mass surveillance and military adventurism that has characterized U.S. foreign policy in recent decades, Bolton’s appearance was widely expected to trigger fierce debate.

Yet the audience was polite (these were conservatives, after all), and Bolton won over some with his insistence on pragmatism over ideology. His vision of U.S. foreign policy, he explained, was that it should focus primarily on the national interest of the United States, not on abstract principles or the desires and edicts of transnational global organizations.

Unusually, many of the Jewish speakers, including Hazony, acknowledged the legitimacy of cultural considerations (as opposed to racial ones) when shaping immigration policy.

They seemed sympathetic to the desire of many in Europe to drastically curtail if not eliminate the flood of economic migrants from Islamic and African nations.

This is unusual because many Jews in the West side with those advocating liberal immigration policies if not outright open borders.

Jewish refugees were tragically turned away from western countries during the Second World War, resulting in some cases in their subsequent deaths, and Judaism emphasizes that the Jewish people were once refugees themselves in Egypt and therefore owe of duty of hospitality to strangers.

Yet critics on the Right, especially in Europe, often accuse Jewish thinkers of hypocrisy on the issue of mass immigration. They claim that many Jewish political groups support open border policies for the Christian nations of Europe and North America but welcome strict immigration controls, and even an enormous border wall, for Israel.

“Why is it okay for Israel to be a Jewish state,” these European right-wingers often ask, “but not okay for Poland or Italy to be a Catholic state or for France to be a French state?”

The surprising answer, Hazony and other speakers said, is that it is okay for Poland to be Catholic and for France to be French – so long as the religious and civic rights of religious minorities are respected.

What is more, it is perfectly legitimate for countries or even regions to actively promote the culture, language and even religion of the majority, Hazony said – such as the French language in Quebec or Catholic feast days in Ireland.

Hazony, an Orthodox Jew, especially emphasized that Christian values and ideals shaped the political culture of western nations – and should be preserved and even actively encouraged.

He therefore insisted that a corrosive secularism that strives to eliminate religion from the public square, in the name of religious tolerance, will only succeed in dissolving the ethical and social framework that makes western democracies today havens of civil rights and relative peace.

Not all attendees appeared convinced.

He seemed uncomfortable with the liberalism-bashing of many attendees, insisting that there are two types of liberalism. One represents the progressive overreach about which virtually all conservatives complain. The other, he said, is the culmination of the western political tradition itself. Conservatives should not throw out the baby of constitutional self-government in its quest to rid the world of the excesses of progressive liberalism, he said.

Most remarkably, the overwhelming majority of speakers and attendees seemed highly critical of doctrinaire free market ideology, once the hallmark of the conservative movement, and were outright hostile towards big corporations and so-called “woke capital.”

This is because more conservatives today recognize that laissez-faire economics is the intellectual foundation of globalism and the reigning ideology of tech conglomerates.

As a result, more conservatives are willing to say that the government must take an active role in curbing the power of multi-national corporations that owe their allegiance to no country.

Conservative author Mary Eberstadt, one of the most popular speakers at the conference, compared libertarianism to moonshine – something that may be intoxicating when you first drink it but ends up doing a lot more harm than good.

More than one speaker excoriated Google, nominally a U.S. corporation, for its refusal to work with the U.S. military while actively cooperating with the Chinese military.

Peter Thiel made headlines by asking whether Google and other tech giants had done enough to make sure they are not riddled with Chinese spies stealing U.S. government secrets.

This reevaluation of free market orthodoxy was most evident on the second night of the conference during a friendly but animated debate between libertarian economist Richard Reinsch and Manhattan Institute analyst Oren Cass on the question of whether the U.S. government should have an industrial policy – that is, actively promote some industries while discouraging others, the way China does.

Reinsch gamely made the standard libertarian arguments about improved GDP and the invisible hand, while Cass argued that a nation should make sure that market forces serve national interests, not merely private ones.

Almost twice as many of the conservative attendees voted for government intervention, 99 to 51, as opposed it.

In the end, the two days of lectures, debates, and hallway conversations clearly illustrated that a sea change has occurred among many ordinary conservatives.

Many conservatives clearly have outgrown the orthodoxy of the past 30 years – which served its purpose at the time but now is seen as increasingly irrelevant.

The conservatives at this conference, at least, are increasingly opposed to laissez-faire ideology that enriches tech executives at the expense of ordinary workers and skeptical of military adventurism.

The hallmark of a truly nationalist politics, both foreign and domestic, according to these activists, is that policies serve the national interest – the interests of a nation’s citizens — not the interest of Google or transnational bodies like the United Nations.