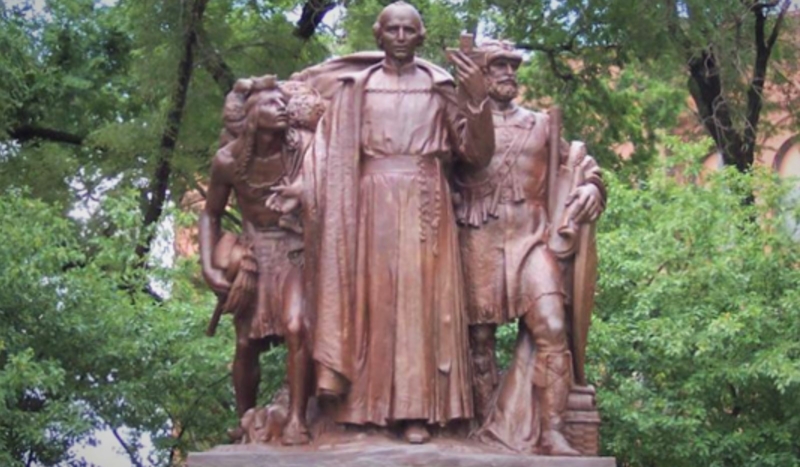 CV NEWS FEED // The City of Chicago is targeting 41 monuments and other public works of art for possible removal, but the controversial plan is gaining the attention of Catholics and patriots who want their history preserved.

In response to a rash of violence and vandalism against public property by AntiFa and Black Lives Matter insurgents last summer, Chicago officials launched the Chicago Monuments Project.

According to its website, the Project’s purpose is to identify works on public property which present “issues” such as the following:

“Memorializing individuals with connections to racist acts, slavery, and genocide

“Not sufficiently including other stories, in particular those of women, people of color, and themes of labor, migration, and community building

After examining 500 monuments, plaques, and other municipal works of art, the Project pared down its list of offending pieces to 41.

Included on that final list are memorials to President George Washington, President Abraham Lincoln, and Father Jacques Marquette, a Catholic missionary priest who ministered to native Americans in the 17th Century.

Ever since activists began calling for the removal of monuments deemed offensive to progressive sensibilities, commentators on the political right have been offering counterarguments about the value of preserving the American heritage these public works represent.

Bandying words with reporters who sympathized with the cause of removing statues of Southern Civil War generals, President Donald Trump argued in 2017 that it would set a precedent for the removal of more mainstream artifacts. Thomas Jefferson owned slaves, the president pointed out, and so did Washington. Activists may have begun with calls to remove Confederate monuments, but if America conceded, the destruction of statues would not stop there, he said.

That warning played itself out three years later. In 2020, activists began violently toppling monuments, including those honoring abolitionists like President Abraham Lincoln, and even African American hero Frederick Douglass.

But vandals also destroyed statues of Catholic heroes such as Saint Junipero Serra.

Some Catholic commentators believe the new targeting of Catholic figures can and should lead to an American Catholic renewal of sorts — one in which the Catholic faith and American patriotism work in tandem.

One expert in particular has been proactive in calling fellow Catholics to defend Chicago’s monument to Fr. Jacques Marquette by commenting on the Chicago Monument Project website (which readers can do by clicking here).

“Across the Great Lakes and Mississippi Valley, monuments to Fr. Marquette have honored his life of courage and sacrifice,” Ruth D. Nelson, author of Searching for Marquette: A Pilgrimage in Art (Marquette University Press) told CatholicVote Friday.

“His explorations opened to the world America’s greatest waterway and his witness to Christ and the Virgin Mary won followers among the Native peoples he served,” she said. “His contributions were remembered two centuries later by Protestants and Catholics alike who joined in common cause to build these monuments.”

“Now,” Nelson concluded, “we need to join together once again to save them.”

“There’s no mistaking it. What Democratic leaders like Chicago Mayor Lori Lightfoot are doing here is allowing public policy to follow the lead of a small and vicious minority of violent bigots,” said CatholicVote president Brian Burch on Friday. “The terrorists who vandalized public property and attacked innocent people in the streets last summer don’t represent the American people. And all Democrats are doing by empowering them is reminding the rest of us who we are:”

For American Catholics in particular, all of this just reawakens our patriotism. And it reminds us that we serve a God who built our Church, and we belong to the same faith as Catholics like Fr. Jacques Marquette, who helped build this country. Our Church was built to outlast every hateful movement, and so it has for millennia. You want to tear all that down? Good luck!