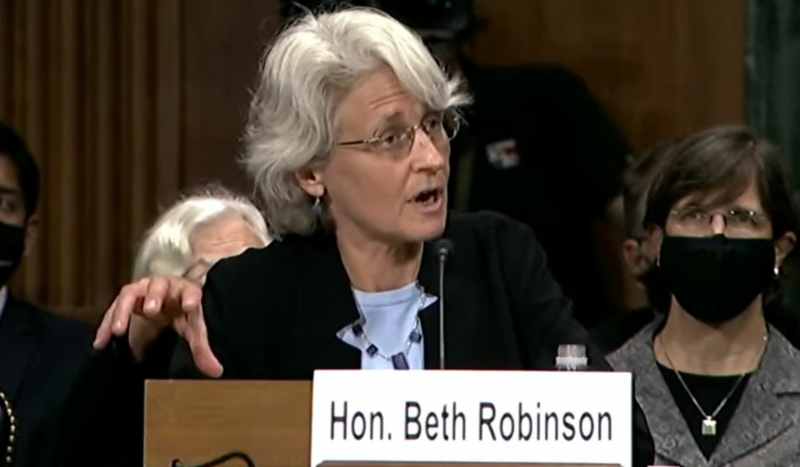 CV NEWS FEED // CatholicVote has announced its opposition to “anti-Catholic” Beth Robinson, whom President Biden nominated for a lifetime appointment to the United States Court of Appeals for the Second Circuit.

“Beth Robinson shouldn’t have been nominated for the federal bench” in the first place, Burch wrote in an email to Catholic voters in North Carolina. The action alert urged voters to call the offices of Sen. Thom Tillis, R-NC, who may vote for Robinson’s confirmation despite a record that is offensive to Catholics.

“President Biden wants [Robinson] to serve on the United States Court of Appeals for the Second Circuit — which covers New York, Connecticut, and Vermont,” Burch explained:

Before Robinson joined the court in Vermont, she represented Linda Paquette, who tried to force a devout Catholic couple who owned a printing company to produce materials for Vermont Catholics for Choice.

The organization “Catholics for Choice” supports abortion “100% of the time,” Burch pointed out, and “has been denounced by our bishops time and time again.”

“Now ask yourself: Why on earth would Senator Thom Tillis consider voting yes on her nomination?” Burch asked. “If the Democrats want to appoint raging anti-Catholic judges to the federal bench, they shouldn’t get the support of pro-life Republican senators.”

In the case Burch referenced, then-attorney Robinson represented Paquette during her attempt to force the Baker family — the Catholic owners of the printing shop — to create pro-abortion materials. She also elevated the case against the Bakers to the Vermont Supreme Court after a lower court rejected it in favor of the Catholic printers’ First Amendment rights.

In addition, Robinson wrote a legal brief for the Vermont high court in which she referred to the Bakers’ pro-life beliefs as “invidious,” “pernicious,” and “akin to racial discrimination.”

“During her nomination hearing, Justice Robinson suggested that it was offensive to her client that the Bakers believed a Catholic could not properly be ‘pro-choice,’ Burch wrote in a letter to the Senate urging members to vote “no” on Robinson’s nomination.

“The actual teachings of the Catholic faith embrace a consistent ethic of life from conception to natural death, and categorically condemn abortion as an act of violence against the most innocent and defenseless among us,” he wrote:

For Catholics, the Church’s guidance is principled, not partisan, and we rightly understand various political opinions can be compatible with faith and the natural law.  Catholics must weigh prudential judgments when applying moral principles to specific policy issues in areas such as war, housing, health care, and immigration.

In other areas, however, the Church’s magisterium allows for far less variety of opinion. “For Catholics, these foundational issues touch on what the Church describes as ‘intrinsic evils,’” Burch explained, and cited a document from the United States Conference of Catholic Bishops about

“For these reasons,” Burch concluded, “CatholicVote urges the Senate to reject Beth Robinson’s nomination to be a United States Circuit Judge of the United States Court of Appeals for the Second Circuit.”