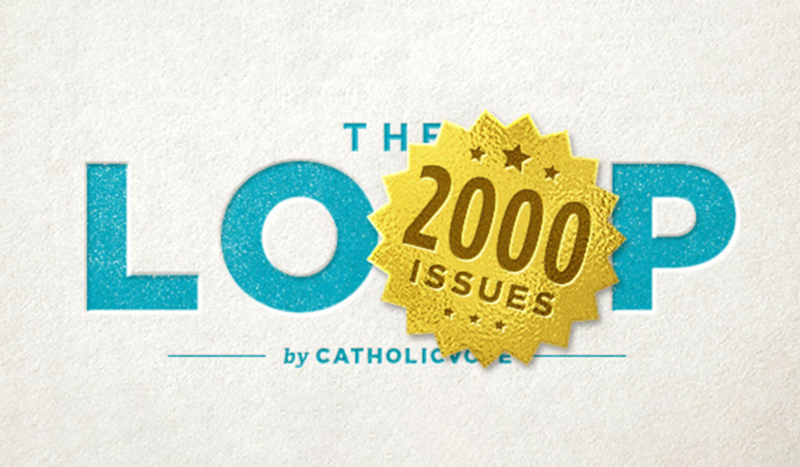 CV NEWSFEED // CatholicVote celebrates two significant milestones on September 8th, the Nativity of the Blessed Virgin Mary. The organization marks 17 years since its founding in 2005, and The LOOP – CatholicVote’s daily newsletter – sends out its 2,000th issue.

“We are so grateful to God for bringing us this far,” said CatholicVote President Brian Burch.

When we started back in the early 2000’s, we were entering a field of Catholic advocacy that was largely vacant. Catholics aligned themselves with different, single-issue groups, but we believe that Catholics have something to say on every issue – the environment, wages, sanctity of life, education – you name it.

Click here to see the very first issue of the LOOP on March 31, 2015 (FYI: some of the links no longer work)

CatholicVote’s 17th year has already seen some of its biggest initiatives ever, including the Day of Adoration to End Abortion. Over 1,000 Catholic parishes held Adoration on December 1st, 2021, as the Supreme Court heard arguments in the Dobbs vs. Jackson case. Ultimately, the Court ruled to overturn Roe vs. Wade in June.

This year also saw the launch of the Catholic Accountability Project (CAP), an initiative to track and expose Catholic politicians, media personalities, and other public figures and institutions that fail to uphold the truths of the Catholic faith. The project has already published scorecards for Catholic members of Congress, an investigative report on Catholics for Choice, and two violence trackers marking attacks against churches and pregnancy centers.

CAP’s work has earned the attention of major media outlets and been cited by reporters as they question officials – as well as by pro-life lawmakers and lobbyists.

In June, CatholicVote rolled out the “Hide the Pride” campaign, urging Catholic families to ask their libraries to remove LGBTQ displays from children’s sections. The effort drew the attention (and ire) of the Left, including censure from the American Library Association. Parents who participated expressed their enthusiasm and gratitude for CatholicVote’s easy-to-follow action guide and pre-written letter to library boards.

In August, CatholicVote unleashed its largest media campaign to date with a hard-hitting video calling out Catholic President Joe Biden for his silence on the rising violence against Catholic churches and pregnancy resource centers. CatholicVote contracted to spend $1,000,000 to run the ads nationwide – and got the attention of policymakers immediately.

But the daily work of CatholicVote happens in small ways – creating beautiful videos and graphics, articulating arguments in an elegant and persuasive way, or finding that encouraging piece of good news that brings light into the darkness.

“We are trying to be a faithful witness to the Church, to represent the faithful, our brothers and sisters in the pews,” said Communications Director and LOOP Editor Joshua Mercer. “We hope and pray that we can be faithful to our mission, which is really just bringing the beauty of the Church to the public square.”