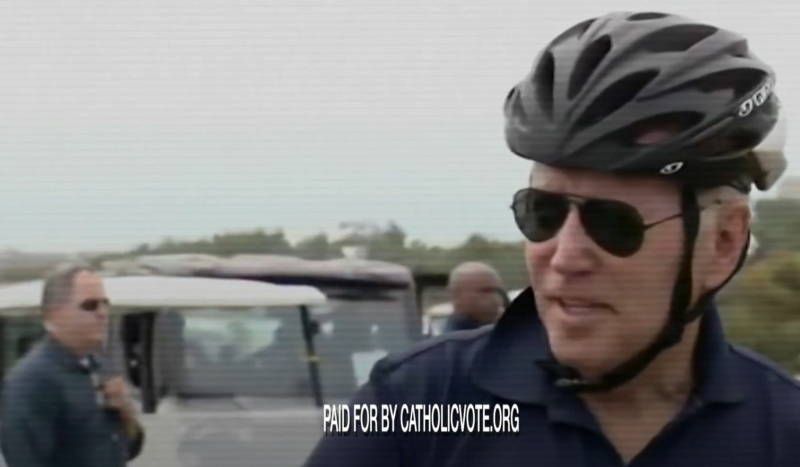 CV NEWS FEED // A CatholicVote ad confronting the Biden administration for its silence on pro-abortion violence against churches and pregnancy care centers has been viewed over 10,000,000 times since it launched less than one month ago.

CatholicVote announced in August “our single largest media campaign ever – with a commitment of $1 million – to bring needed pressure on President Biden and those in his administration who refuse to speak out against the rise in abortion terrorism targeting judges, churches, and pregnancy resource centers.”

The ad reached the 10-million-view mark across all platforms Tuesday, with over two million views on YouTube alone.

Those numbers do not include the thousands of viewers who have seen the ad on television. The ad has been airing in Wisconsin and Arizona, as well as a number of key districts in other states across the country, and in Washington, D.C., so that political figures and the Justice Department will see it, CatholicVote Communications Director Joshua Mercer said at the time the campaign launched.

“In the 1960s, when churches were burned, President Kennedy stepped up, condemned it,” the video’s narration states. The voice of President John F. Kennedy can be heard next: “To burn churches I consider both cowardly as well as outrageous.”

The ad points out that Kennedy “pledged justice” in response to attacks on churches, saying: “As soon as we are able to find out who did it, we’ll arrest them.”

“Now churches are being burned again, because they protect unborn babies and women in need,” the ad points out. Next it shows a clip of “our second Catholic president” responding to pro-abortion groups’ attacks against Catholics. “Keep protesting, because keep making your point,” Biden said.

As CatholicVote has previously reported,

the U.S. Conference of Catholic Bishops has found itself in numerous confrontations with President Biden since he took office, many of them over the Catholic Church’s teaching on the sanctity of life, which the president rejects.

In addition, CatholicVote has tracked nearly 70 attacks on Catholic churches since early May, when radical abortion groups first threatened a “summer of rage” in response to reports that the justices of the U.S. Supreme Court – including a number of Catholic justices – planned to rule Roe vs. Wade unconstitutional.

CatholicVote’s violence trackers, which include a tracker of pro-abortion attacks on crisis pregnancy centers (64 since May) and a tracker of attacks on Catholic churches, have been cited by lawmakers and journalists who are challenging the Biden administration to address the violence.

CatholicVote President Brian Burch has also repeatedly appealed to the Biden Justice Department to enforce the law against the ongoing attacks.