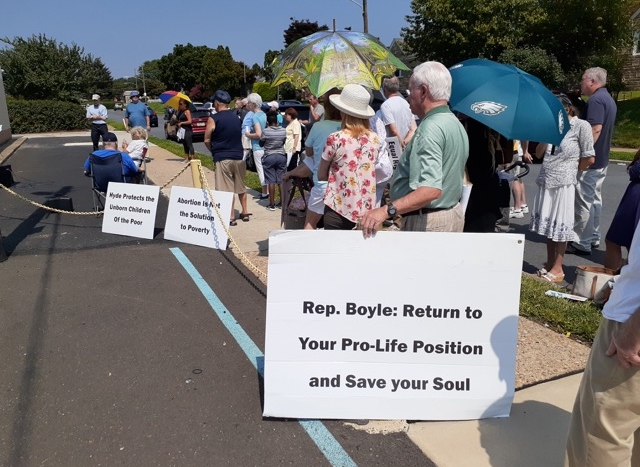 CV NEWS FEED // The Northeast Philadelphia Pro-Life Coalition recently held a “Save Hyde” rally outside the office of Rep. Brendan Boyle, D-PA, urging the congressman to support the Hyde Amendment, which prohibits taxpayer funding of most abortions.

The CatholicVote Action Network is partnering with pro-life groups throughout the nation, like the Northeast Philadelphia Pro-Life Coalition, in the battle to protect life.

When Boyle first ran for Congress, he opposed taxpayer funding of abortion. Then this year, he voted with his party to pass two spending bills without the Hyde Amendment. The Hyde Amendment has customarily been attached to all spending bills, enjoying the support of both parties. After Democrats won more seats in Congress in 2020, and the White House, Democratic leaders engaged in an unprecedented campaign to eliminate Hyde.

As organizers of the Aug. 11 rally at Boyle’s office pointed out, Boyle checked all the pro-life boxes in a candidate questionnaire when he first ran for office in 2008. Among other pro-life positions, he indicated that he opposed taxpayer-funding of abortion.

Mike McMonagle, president of the Pro-Life Coalition of Pennsylvania and one of the organizers of the rally, explained that the Hyde Amendment is again at stake in the latest reconciliation bill.

“The U.S. Senate the U.S. Senate voted 50-49 to amend the ‘Reconciliation Bill’ with the Hyde Amendment” on Aug. 11, McMonagle wrote in a letter to supporters:

However, this vote is not final. This vote only provides guidance to the Appropriations Committee to keep Hyde in the Health and Human Services (HHS) Budget Bill, which will be considered when the U.S. Senate reconvenes in late September 2021.

Next, the House is expected to vote again on the matter of including Hyde, with Boyle bring a key vote. McMonagle encouraged pro-life Americans to contact their representatives and senators to urge them to protect Hyde.

“Our ‘Save Hyde’ Rally at U.S. Rep. Brendan Boyle’s Office initiated such efforts with him,” McMonagle said.

“The CatholicVote Action Network is proud to partner with the Northeast Philadelphia Pro-Life Coalition in the battle to protect the most fundamental human right, the right to life,” said CatholicVote’s Mary Thomas. “We join them in calling for Congressman Boyle to return to his pro-life position by voting to preserve the Hyde Amendment.”

“As Catholics, our faith teaches us that we must always protect the lives of the unborn,” Thomas added, “and we call on our fellow Catholic, Congressman Boyle, to join us in the fight to protect life.”