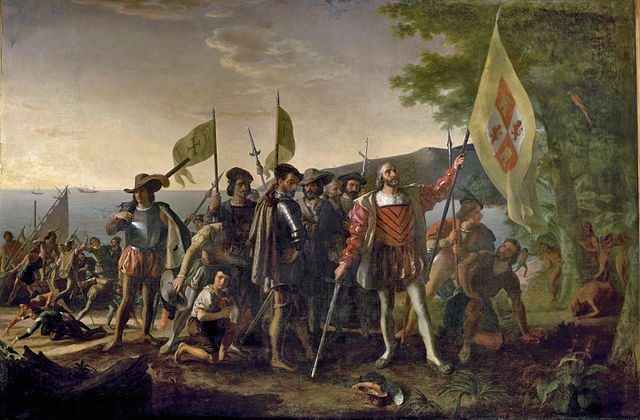 CV NEWS FEED // Many prominent Catholics and Americans of Italian descent publicly embraced Columbus Day this year, boldly pushing back against years of progressive efforts to stigmatize and erase the traditional American holiday.

The Knights of Columbus invited people to “celebrate Columbus Day” by watching a documentary that the Catholic confraternity produced.

“For Christopher Columbus, faith and conviction inspired a voyage that would forever change our world,” the video’s narrator said. The film also featured comments by former Supreme Knight Carl Anderson, who called Columbus a “daring visionary,” a “giant of the Renaissance,” and “one of the great heroes of history.”

While the Knight’s celebration of Christopher Columbus drew some detractors on social media who tried to frame the organization as diminishing the contributions of native Americans, it is noteworthy that the Knights had also celebrated Native American Heritage Month the day before.

“In the words of Carol Delaney, who is a preeminent Columbus historian, the Left accuses Columbus of things that he actually did not do, that other Spaniards did, that actually in many cases Christopher Columbus tried to stop the Spaniards from doing,” Knowles said.

Conservative political leaders also stepped up to celebrate and vindicate Christopher Columbus. “In honor of Columbus Day, and as a proud Italian-American, I give you Reagan’s 1986 proclamation, reproduced in full,” wrote Sen. Ted Cruz, R-TX, sharing a text by former President Ronald Reagan. “It’s tragic that young people aren’t taught this anymore.”

With his faith, vision, and courage, he could navigate beyond his world’s horizons. He left a wide wake for all those to follow who would dream as he dreamed, who would defy the naysayers and dare to strive for new goals. Follow him they did; and may they ever do so, those who would make the New World ever new with all the ingenuity, energy, and boldness they have.

In a text similar to Reagan’s proclamation, Gov. Ron DeSantis, R-FL, formally acknowledged the holiday as well. “Christopher Columbus displayed courage, determination, and perseverance when he sailed the ocean blue more than 500 years ago,” the governor tweeted. “Happy Columbus Day!”

“Columbus Day was first proclaimed a national holiday by President Benjamin Harrison in 1892 to commemorate the 400th anniversary of Columbus’ discovery of America,” DeSantis wrote in his statement,

and for more than a century has, until very recently, been a unifying day for all Americans to celebrate the fact that had Columbus and the explorers who followed him not traveled across the Atlantic, the country we hold dear and the lives we enjoy would not exist….

DeSantis, a Catholic, wrote his statement in continuity with a longstanding Catholic tradition of honoring the great explorer.

Faced with a brutal secularist regime in Mexico, a number of Mexican members of the Knights of Columbus willingly gave their lives rather than give up the heritage associated with Christopher Columbus. Due to their brave resistance, the Mexican regime at one point banned the Knights and their literature.

And decades earlier, Pope Leo XIII praised Columbus in an address. “…Columbus is ours,” Pope Leo wrote, “since …. it is indubitable that the Catholic faith was the strongest motive for the inception and prosecution” of the explorer’s voyage:

Columbus resolved to go before and prepare the ways for the Gospel, and, deeply absorbed in this idea, gave all his energies to it, attempting hardly anything without religion for his guide and piety for his companion.

The year was 1892, and while world leaders, including the president of the United States, formally commemorated the 400th anniversary of Columbus’ initial voyage, Pope Leo blessed and joined those leaders, writing:

In order, therefore, that the commemoration of Columbus may be worthily observed, religion must give her assistance to the secular ceremonies. And as at the time of the first news of the discovery public thanksgiving was offered by the command of the Sovereign Pontiff to Almighty God, so now we have resolved to act in like manner in celebrating the anniversary of this auspicious event.

We decree, therefore, that on October 12, or on the following Sunday, if the Ordinary should prefer it, in all the Cathedral churches and convent chapels throughout Spain, Italy, and the two Americas, after the office of the day there shall be celebrated a Solemn Mass of the Most Holy Trinity. Moreover, besides the abovementioned countries, We feel assured that the other nations, prompted to it by the counsel of their bishops will likewise join in the celebration, since it is fitting that an event from which all have derived benefit should be piously and gratefully commemorated by all.

Despite the unified and historical Catholic position on the explorer represented by many of the comments above, some Catholics still hold to the view of Columbus that is more popular among progressive and secular commentators. After the Catholic apostolate Catholic Answers defended Columbus Monday, National Catholic Register film critic Steven D. Greydanus harshly accused them.

“Absolutely appalled that Catholic Answers is perpetrating this crashingly absurd whitewashing of history in the name of Catholic apologetics,” Greydanus tweeted.