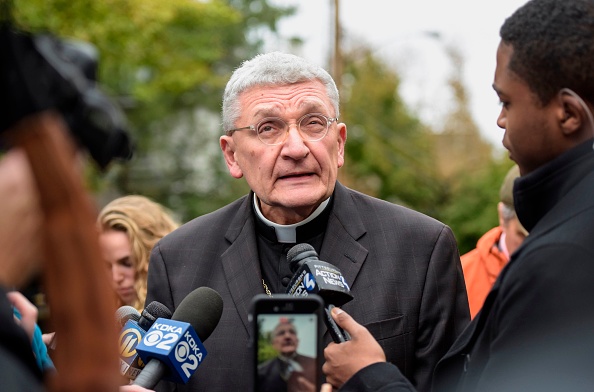 CV NEWS FEED // Thousands of Catholics, including disgruntled parents, are pushing back against the Diocese of Pittsburgh’s mask mandate in Catholic schools.

More than 3,000 signed a petition to complain about the new mask mandate, which the Diocese of Pittsburgh announced Aug. 17. The petition states: “There is a growing concern that parents are losing their rights to do what is best for their children.”

“We must stand up as parents and as a community and say enough is enough,” the petition continues:

Parents and caregivers – not the government or the diocese – are responsible for making decisions about their children’s health and safety. Parents must have the option to consider all available evidence and the vast array of concerns beyond one discrete virus when making these decisions. We DEMAND the option to make our own decisions as to whether our children should wear a mask to school.

Another open letter appealed directly to Bishop David Zubik, asking “that the Diocese of Pittsburgh reverse its masking edict immediately, and allow parents the freedom to decide what is best for their children, a right granted by God and recognized by Holy Mother Church.”

Mask mandates are themselves controversial, with a growing number of medical experts arguing that the mandated use of masks in schools is scientifically baseless. Pittsburgh Catholics, however, have an additional complaint: “Many parents feel bait-and-switched,” one parent told a local news outlet.

Parents were told in May when they registered for the upcoming academic year that masks would be optional, [she] said.

“We have not received a direct response from the Diocese to our letter,” another concerned parent told CatholicVote, “however they released a statement to the media.”

That statement, dated Aug. 26, repeated that the Diocese “will begin the 2021-2022 school year with mandatory masking indoors for students, faculty and staff—regardless of vaccination status—unless medical or developmental conditions prohibit their use.”

“As a private institution we have a right and an obligation to protect the health and safety of all students in our care,” the Diocesan statement continued:

That obligation transcends personal opinions. As previously shared, our goals continue to be to keep ALL students and staff safe while providing five-day-a-week in-person instruction. By enacting a masking mandate for our schools, we follow the lead of Pope Francis who has said that anything we do to prevent the spread of COVID-19 is an act of love. This is truly a pro-life issue.

The Diocese went on to cite the CDC, the “vast medical authority” of experts in the local area, and “a growing list of private and public schools who have announced masking mandates in an effort to protect and serve this vulnerable segment of our population.”

“This too, is our right and responsibility, and we hope that parents and the public respect and support our position,” the statement said, and concluded with a quotation from the diocesan Director of Schools, Michelle Peduto, which said in part: “We live [our] mission by loving God above all things and loving our neighbor above ourselves. It is our belief that this policy statement best demonstrates both.”

“The most recent statement … by the Diocese is just another example of the top-down approach that has completely excluded parents and trampled on their rights under Canon Law, The Catechism of the Catholic Church and Vatican II,” said a follow-up letter by local parents:

As Parents we appreciate that the schools to which we entrust our children take their obligation to protect the health and safety of all students seriously. However in no way can that obligation ever usurp the fundamental rights of parents given to them by God.

The parents’ letter noted that the Diocese claims to have taken the time “to consider the opinion of ‘hundreds of local pediatricians and medical experts’ yet they had no time for input from parents. Such a disregard of parental involvement is unacceptable.”

The letter went on to point out that “Ms. Peduto misused Sacred Scripture to support her notion that parents should put the health and welfare of other children above their own:

She stated: “…loving our neighbor above ourselves…”. Jesus preached “to love your neighbor as yourself” (Mark 12:31). As Christian parents we are trying to live out this gospel value by respecting other parents’ choices to decide what is best for their children just as we are asking for ourselves. Parents who have determined that placing a prophylactic device on their children is in their best interest should be respected just as parents who have determined that such a device could be harmful to their children.

Below their letter, the parents included three authoritative Catholic quotations:

“Parents must cooperate closely with the teachers of the schools to which they entrust their children to be educated; moreover, teachers in fulfilling their duty are to collaborate very closely with parents, who are to be heard willingly and for whom associations or meetings are to be established and highly esteemed.”

Catechism of the Catholic Church:

“The fecundity of conjugal love cannot be reduced solely to the procreation of children, but must extend to their moral education and their spiritual formation.”The role of parents in education is of such importance that it is almost impossible to provide an adequate substitute.” The right and the duty of parents to educate their children are primordial and inalienable.”

“Since parents have given children their life, they are bound by the most serious obligation to educate their offspring and therefore must be recognized as the primary and principal educators.”