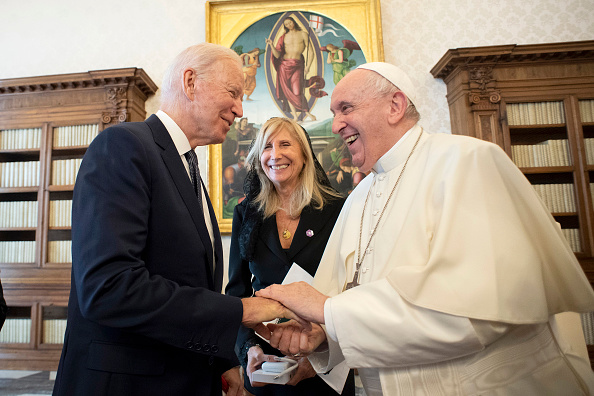 CV NEWS FEED // President Joe Biden publicly said he wanted leaders who are “absolutely committed” to protecting legal abortion on the same day when he met with Pope Francis.

“Virginia, reproductive rights are under attack throughout the country and we must elect leaders who are absolutely committed to protecting those rights,” Biden tweeted. “Terry McAuliffe has made it clear that he will be a brick wall against anyone trying to threaten reproductive rights.”

It is not known what precisely the pope and the president talked about during their meeting at the Vatican that day. While a growing number of Catholic leaders have confronted Biden over his abortion advocacy and its incompatibility with the teachings of the Catholic faith, Pope Francis has been reticent about addressing the scandal.

The U.S. bishops voted earlier this year to draft a teaching document that may include recommendations for how self-proclaimed Catholics who publicly promote abortion should approach Communion. In the midst of their deliberations, the Vatican sent the bishops a letter warning them to tread lightly.

More recently Pope Francis — while speaking against abortion — refused to discuss the case of Biden in particular. The pope did however warn against bishops becoming “politicians” rather than pastors in dealing with pro-abortion politicians who insist on receiving Communion, and he also mentioned that he himself had never denied anyone Communion for any reason.

Some Catholic commentators have questioned the pope’s near-silence on the matter in light of his habit of outspokenness on other issues. During the months of Donald Trump’s campaign for president and throughout his time in office, Pope Francis spoke a number of times against “those who think only of building walls” and “xenophobic” people, whom he compared to the murderous Biblical villain Harod and called, among other things, “not Christian.”

Following the president’s meeting with the pope, CatholicVote pointed to Biden’s tweet in which he praised Virginia Democrat Terry McAuliffe as a “brick wall” of defense for the “right” to abortion. “Not too long ago the Holy Father felt the need to tell an American President that Christians don’t build walls,” CatholicVote tweeted:

Yesterday, on the very same day he met the pope, a Catholic president tweeted about building walls to protect the killing of innocent children.
Our Bishops must act.

“Hours after meeting with Pope Francis,” said CatholicVote President Brian Burch, “Biden doubled down on his aggressive abortion advocacy, tweeting his full-throated support of protecting the right to kill childen … perhaps even emboldened by the pope’s refusal to address the glaring scandal.”