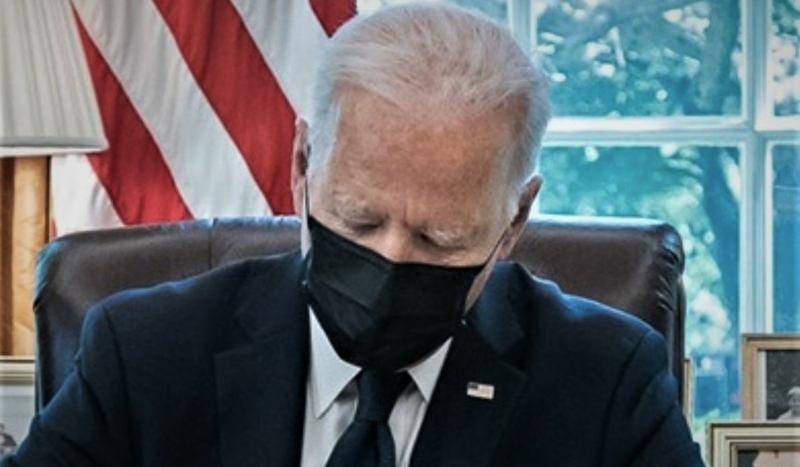 CV NEWS FEED // The United States Conference of Catholic Bishops is set to clarify the Church’s stance on the reception of Holy Communion by politicians, like President Biden, who oppose the Catholic Church on grave moral matters such as abortion.

The USCCB will decide at its June conference “whether to send a tougher-than-ever message to President Joe Biden and other Catholic politicians: Don’t receive Communion if you persist in public advocacy of abortion rights,” the Associated Press reports:

“Because President Biden is Catholic, it presents a unique problem for us,” said Archbishop Joseph Naumann of Kansas City, Kansas, who chairs the USCCB’s Committee on Pro-Life Activities. “It can create confusion. … How can he say he’s a devout Catholic and he’s doing these things that are contrary to the church’s teaching?”

The document, if approved, would make clear the USCCB’s view that Biden and other Catholic public figures with similar viewpoints should not present themselves for Communion, Naumann said.

A number of Biden supporters, including some Catholics, are already fighting the bishops’ effort to protect the integrity of the Church’s highest Sacrament.

Rev. James Martin, SJ, for example, shared the perspective of Biden’s liberal pastor on social media Wednesday. “Pastor of Holy Trinity Church in DC, where the President attends Mass: ‘We’re on the same page. The cardinal has said: ‘The Eucharist is not to be used as a weapon.’”

Archbishop Wilton Gregory of the Archdiocese of Washington, D.C. has spoken similarly against efforts to hold Biden accountable for his rejection of the Church’s moral positions. Critics, however, have questioned the archbishop’s standing on the issue in light of his own unhesitating criticism of former President Trump for praying at a Catholic site with his wife.

Michael Sean Winters of the left-wing National Catholic Reporter accused bishops of merely using the Church’s teachings on receiving the Eucharist for political gamesmanship, rather than sincerely trying to defend the Body of Christ and clarify Catholic teaching. “I think this is all just about trying to delegitimize Biden,” Winters told the Washington Post Wednesday.

“Norms for the proper reception of communion are not new,” said CatholicVote President Brian Burch Wednesday in a comment quoted partially by the Washington Post.

“The Church has long provided guidance on the need to be ‘properly disposed’ to receive communion, which has always included not being conscious of any grave sin. The teachings of the Church,” Burch explained, “along with its sacramental norms, are not punishments but invitations to live more fully what the Church professes and believes.”

“Public officials who repeatedly declare by their actions that they are not in communion with the Church, especially on matters of grave moral import, create confusion and division,” Burch continued:

Nobody celebrates a Catholic who chooses to separate themselves from the Church. But when they do, we can’t pretend as if the disunity does not exist. The hope and prayer of every Catholic is that all who profess the Faith practice it and live it. Any religious institution risks its own credibility and integrity if it allows its adherents to flaunt its core teachings.

Burch also pointed out that this controversy “didn’t start with Joe Biden, or even John Kerry in 2004.” During the civil rights era, some white Catholic officials in the Louisiana Democratic Party publicly defied the Church by fighting to keep schools racially segregated.

“The Church rightly withheld communion and even excommunicated Catholic public officials that resisted its demand that Catholic schools desegregate in the 1950’s,” Burch said. “This is not a ‘conservative’ or ‘liberal’ thing. It’s a truth and integrity thing.”

In Burch’s view, today’s arguments against denying communion to powerful political figures who oppose the Church’s moral teachings on abortion or marriage might have also been used during the 1960’s, when the Church faced Catholic politicians who rejected the civil rights of Americans of color.

“The President’s decision to leverage his vast political power to advance an agenda openly hostile to Church teaching – and yet repeatedly present himself as a devout Catholic for communion, is a source of deep sadness and confusion,” Burch said. “The bishops are rightly concerned about the message this is sending to their flocks, and the resulting division it is causing.”

“Not every Catholic is going to agree with the decision by the bishops,” Burch concluded. “But that’s why they are there. To encourage and lead the Church, especially when it’s hard.”