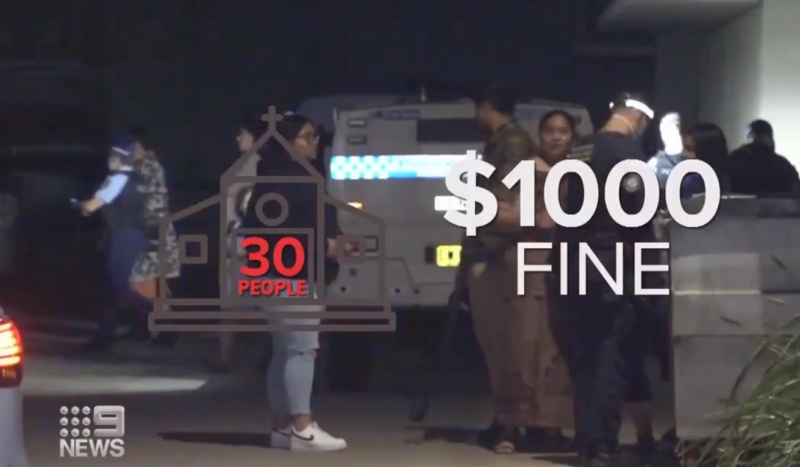 CV NEWS FEED // Australian media reports blaming ordinary citizens for the spread of COVID while ignoring draconian lockdowns and violent arrests have alarmed American onlookers, who warn that lockdowns and other mandates pave the way for a police state.

“It’s those doing the wrong thing driving our record case numbers,” said the news anchor in a recent 9News Sydney report. “Police and health authorities have issued an urgent appeal” to stop a sick Wentworth Point man who left his apartment without a mask, she said. Police issued an arrest warrant.

Health Minister Brad Hazard appears on screen to call the man “one example of the worst of the worst.”

“There’s little sympathy for anyone ignoring the health orders,” said reporter Tiffany Genders over footage of a group of teenagers “caught partying after dark” being chased down and handcuffed. The arrests came with a $1,000 fine.

“681 penalty infringement notices issued in the last 24 hours. More than 400 of those notices were again for people being outside of their home without a reasonable excuse,” said Deputy Commissioner Gary Worboys of the New South Wales Police.

The report gave several more examples of infringements, including a construction worker failing to show proper papers during a random check of his worksite by government investigators, while never questioning the lockdown measures.

“It’s getting harder and harder to hide if you’re doing the wrong thing,” said Genders.

Another newscast from the same media corporation begins with an anchor announcing: “A tip to crimestoppers has blown the lid on a church service at Blacktown attended by 60 adults and children.”

The Christian worshipers have “been described as selfish and arrogant,” the anchor said.

“It’s unclear what passage this pastor is preaching from, but it’s not the public health order,” chides Genders.

Neighbors called authorities after spying Christians gathering for worship, Genders reported. “Accidents happen, but if you’re gonna wilfully breach their acts then I think you’re doing the wrong thing and you should be stopped,” one neighbor said.

Since there was “no QR Code on the door” per a recent mandate, the church was fined $5,000. Each adult worshiper was fined an additional $1,000.

“Whether it’s a soccer match, whether it’s a church service, it doesn’t matter. You cannot, you cannot gather as they did at Blacktown,” said Worboys.

“Live-streaming of services is allowed,” the Genders said. “But according to the rulebook only two people can sing or chant.” Genders then called out Christians who allowed more than that number of people to sing worship music in their live-streamed services.

Reactions in the U.S.

Helen Andrews of The American Conservative called one of the above reports “jawdropping.”

“My question about QR code check-ins—which are now mandatory at grocery stores, workplaces, cafes, pubs, salons, hotels, outdoor weddings and funerals, etc.—is whether there is any intention of ever phasing them out,” she wrote. “My advice to Americans is to never, ever get used to scanning a QR code every time you go to the grocery store, because once you show that you’re willing to put up with that, you’ll never get rid of it.”

CatholicVote President Brian Burch called the news out of Australia “unbelievable,” and also pointed out its relevance to policy debates in the U.S. “Some people are still asking: ‘What’s the big deal with mask mandates? Is that really the hill to die on?’ Well, watch some Australian TV. There’s your answer.”

As mask and vaccine mandates crop up throughout the U.S., Burch’s warning becomes more and more compelling.

After U.S. regulators announced their full approval of the Pfizer vaccine Monday, President Joe Biden lost no time in calling on lawmakers, employers, and others to begin mandating the COVID shot as a condition for employment, and even access to public spaces such as grocery stores and restaurants, immediately.

Readers can watch the two news reports cited in this article below.