Atlantic Article Blasts the Holy Rosary as ‘An Extremist Symbol’ 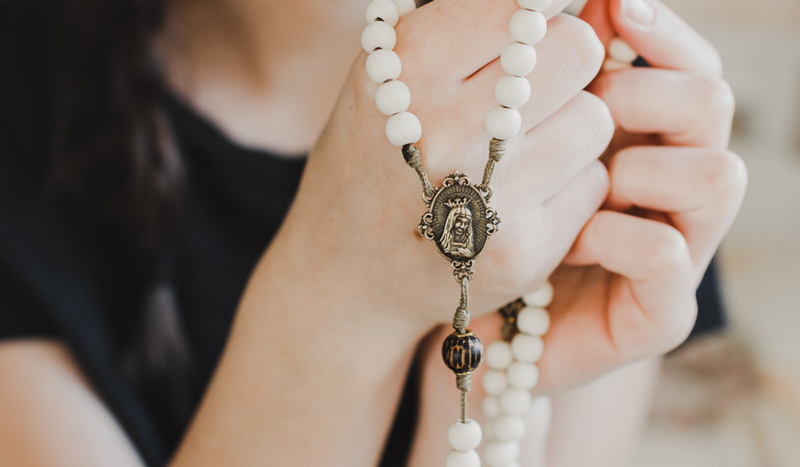 In what was probably an unwitting stroke of perfect timing, the Atlantic published an article claiming the Holy Rosary is an “extremist symbol” on the Vigil of the Assumption of the Blessed Virgin Mary.

The article set off a firestorm of Tweets, memes, and article-length responses from angered Catholics. In the space of a few hours, the editors reworked the title no fewer than three times, reportedly in response to the backlash. The original title read “How the Rosary Became an Extremist Symbol,” the second iteration, “How Gun-Culture Co-Opted the Rosary,” and a third, “How Extremist Gun Culture is Trying to Co-Opt the Rosary.”

In the article, author Daniel Panneton claims that Catholic traditionalists on an extremist fringe have taken the “spiritual notion” that the Rosary is a weapon and literalized it.

The implication is that, like the AR-15, the 15-decade Rosary could be a signal that a Catholic is stockpiling weapons, prepping for Doomsday, and plotting violent attacks on abortion facilities.

Panneton is no stranger to wide-ranging essays linking conservatives, Catholics, and Christians to violent anti-Christian movements, as in his May 2022 piece “The White Supremacist Past – and Present – of Canada’s Anti-Abortion Movement.”

In 2017 Italian journalist Massimo Faggioli coined the term “Catholic cyber-militia” to describe small groups and individuals – including Michael Voris of Church Militant and Fr. John Zuhlsdorf – protesting the appearance of Fr. James Martin, SJ, at Washington Theological College. Panneton latches on to Faggioli’s phrase and runs with it, implying that this cyber-militia “could be” fomenting an actual militia with Rosaries wrapped around their guns.

Can Panneton link men like Voris and Zuhlsdorf to actual instances of violence? No. But he doesn’t have to in order to get his point across.

It quickly becomes clear that Panneton traffics in innuendo more than evidence. While he provides many links as evidence, they are links to nowhere. He claims that “the far right’s constellations of violent, racist, and homophobic online milieus are well documented for providing a pathway to radicalization and real-world terrorist attacks.” His source for this particular claim is a May 2022 New Yorker piece that profiles two “right-wing” mass shooters, neither of whom had any ties to Catholicism or the Rosary.

Panneton’s main argument seems to be that words are weapons, and Catholics who use words like “battle,” “combat,” “warfare,” and “Church militant,” are at high risk for radicalization.

Catholics know there is no shortage of battle-themed language in our most ancient texts. From Ephesians to Our Lady of Fatima, we hear that Jesus Christ came as the victor in the war against evil. Panneton seems to have run a word-search on Catholic organizations in his search for connections to violence.

Panneton offers the Swiss Guard up for scrutiny, linking back to their 2016 swearing-in ceremony for which Roman Catholic Gear donated 150 Combat Rosaries. The Commander of the Guard said, “He sent the Swiss Guard the most powerful weapon that exists on the market: the ‘Combat Rosary’, Literally, the Rosary for the fight.”

Panneton characterizes the Guard – alongside Bishop Olmsted’s 2015 apostolic exhortation “Into the Breach” and the Knights of Columbus’ follow-up video series – as “militarism.”

Without actually accusing any of these organizations or leaders of themselves being extremist, Panneton warns that “among radical-traditional Catholic men, such concerns take an extremist turn, rooted in fantasies of violently defending one’s family and church from marauders.”

Actual evidence of these fantasies is sparse, however, so Panneton covers himself with prevarication and bigoted undertones. He casts enough shadows and doubts to walk his reader from a place of genuine curiosity about Rosary-wielding nuns and friars to a place of distrust if not outright fear of the underground violent extremists they may represent.

Predictably, Panneton sees as his coup-de-grace the connection he makes between Rosary-toting traditionalists and the fall of Roe vs. Wade.

“The pro-choice protests that followed the leaked early draft of the Supreme Court decision in Dobbs v. Jackson Women’s Health Organization, which overturned Roe v. Wade, led to a profusion of social-media posts on the far right fantasizing about killing activists, and such forums responded to Pride month this year with extremist homophobic and transphobic ‘groomer’ discourse.”

The irony, of course, that the vast majority of terror attacks on U.S. soil since the Dobbs opinion was leaked have been pro-abortion groups’ attacks on Catholic churches and pregnancy care centers. In Canada, meanwhile, a recently released report shows that the largest growth in targeted crime – a 260% increase – between 2020 and 2021 was against Catholics.

Whatever untold fury Panneton might uncover in the secret, twisted hearts of Catholic church ladies in their “Legions of Mary” (note the militarist title!), the fact is that the actual violence committed has not been against Leftist activists or Pride paraders but against the people who are most likely to be regularly praying the Rosary.

And how do these Rosary-wielding Catholics respond when abortionists and their clinics are attacked? With unqualified condemnation.

Put Down Your Weapons!

In a wild conclusion, Panneton reminds Catholics that they “are taught to love and forgive their enemies,” and “that to do otherwise is a sin.”

“The ‘battle beads’ culture of spiritual warfare,” he says, “permits radical-traditional Catholics literally to demonize their political opponents and regard the use of armed force against them as sanctified. The sacramental rosary isn’t just a spiritual weapon but one that comes with physical ammunition.”

Absent concrete evidence it is hard to take his words in themselves seriously. What is of great concern, however, is that a well-respected journal like The Atlantic would publish such an attack on any religion’s sacred objects.

Panneton is not a serious journalist, but he is a serious propagandist, teaching his readers to glance fearfully at the friar with a Rosary on his belt or cast a suspicious eye on the family out for a walk with their Rosaries. They are, after all, potential terrorists.

In publishing Panneton’s piece, The Atlantic editors chose to lend a veneer of respectability to America’s last acceptable bigotry, anti-Catholicism.