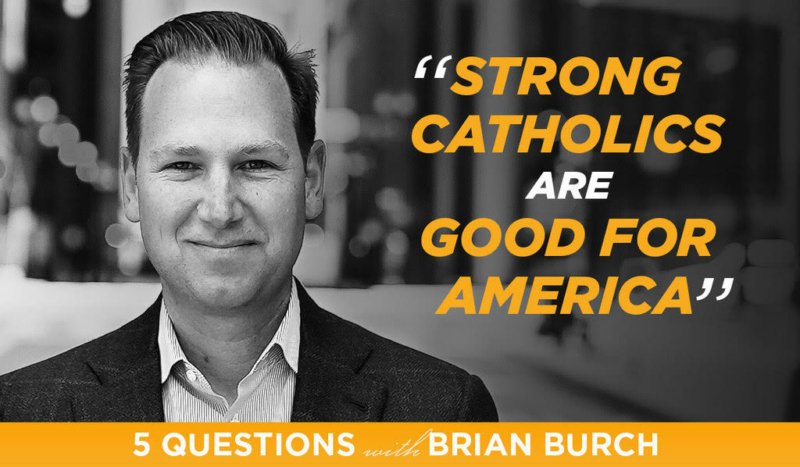 CV NEWS FEED // CatholicVote is well known for its work in educating and mobilizing Catholic voters during critical elections. But anyone who knows CatholicVote President Brian Burch will tell you that the organization is much bigger than any election.  The mission of CatholicVote is to help educate and inspire Catholics to live out the truths of the Faith in public life. And that starts with understanding our past as American Catholics — and how far we’ve come.

Burch is the co-author of a book that seeks to help readers do just that. It tells the stories of American Catholics during the past 250 years, from Vince Lombardi, to Buffalo Bill, to Al Capone and everyone in between. The American Catholic Daily Reader is the new re-release of the acclaimed American Catholic Almanac co-written with Emily Stimpson in 2014, and includes 365-stories, one per day, of Catholics who helped shape the American story.

To learn more about the American Catholic Daily Reader, we sat down with Burch for an interview.

CatholicVote: In your own words, what exactly is the American Catholic Daily Reader?

Brian Burch: The book is a way of reminding American Catholics of who we are, and where we’ve come from. It’s a daily reminder that you’re the recipient of a beautiful and varied heritage, full of characters, adventure, sin, sorrow, grace, heroism, and most of all — God’s Providence.

With each daily story, you get an opportunity to reflect on the many different ways Catholics transformed American life.

To pique your curiosity: The Reader will tell you about a lot of things you may already be familiar with, but then surprise you. Oftentimes, there’s a Catholic element that’s gone missing from the American stories you’ve already heard… until now. Buffalo Bill converted on his deathbed? Who knew?

CatholicVote: What’s a good way for people to get their hands on this book?

Brian Burch: Very soon the book will be available on Amazon and our own online shop. But for now, we’re offering the book for free to anyone who becomes a CatholicVote Champion by joining our Champions Club.

Our Champions Club is a core group of CatholicVote supporters who contribute $10 a month or more to make all our work possible, from the LOOP to our educational videos, lobbying, grassroots teams, and our videos. Our Champions are the lifeblood of CV, and fuel everything you love about what we do at CatholicVote.

So we’re offering a free copy of the American Catholic Daily Reader to every person who becomes a CV Champion. But also, just this week, I’m personally signing every book that goes out to them.

We’re promoting this special offer for a limited time. So if you are interested, please consider signing up now before it’s too late. If you enjoy the work we do and believe in our mission, this is a great way to support CV and get a great book in return!

CatholicVote: Some people might think that now isn’t the right time for books and stories. They might say there’s too much trouble in the world for Catholics to waste time with historical reflections and stories. What would you say to that?

Brian Burch: Believe me, I understand that sentiment. I stopped counting the hours I work every week years ago, and lately it seems like the work gets busier and busier.

So I actually have to stop and make sure I make time for prayer, time with my family, and to enjoy time with Catholics like the ones I go to Church with — the kinds of things that don’t immediately translate into “impact” or what might change the world. But it’s these very things that give us the social “stamina” to persevere. And it’s what makes the adventure of Faith real. It’s the lives of real people, past and present, that pick you up and carry you forward.

One of the terrible things about our hyper-paced world is that we don’t spend enough time reflecting, remembering, and appreciating those in the trenches with us, and those that have gone before us, proving that you can be both a faithful Catholic and a citizen of this great country, however imperfectly. We’re not the first ones to deal with adversity. It’s in the messiness of our world that the most interesting work gets done.

A lot of the passages in this book remind us not to take our own work too seriously. Plenty of American Catholics who were more talented and hardworking than us didn’t think of themselves as saints or saviors. They used their talents to do something worthwhile, often shaped by their Catholic Faith, that was both exhilarating and pleasing to God. Their lives were great adventures, even when they didn’t realize it. God is no less ambitious with us!

CatholicVote: Some Catholics are increasingly alarmed by the rise of anti-Catholic rhetoric among leaders in the Democratic Party. Sen. Kamala Harris, now the Vice President of the United States, has even suggested that members of the Knights of Columbus are too extreme to be allowed to serve as judges. Meanwhile, Catholic advocates of abortion, gay “marriage,” and other things that fly in the face of the Church’s teachings seem to get a free pass. Is there anything in the American Catholic Daily Reader that might help address anti-Catholic prejudice today?

Burch: Oh yes, absolutely. Not only does the Reader show the heroism of certain American Catholics, including saints like Elizabeth Ann Seton and Fr. John Neumann, but it also gives us another insight: Just how mainstream and beloved Catholicism became in America over the course of the two centuries from our Founding until very recently.

In 1776, there was only one Catholic signer of the Declaration of Independence. Catholics were the minority and were viciously persecuted in many places. By the 1960’s, the Catholic John F. Kennedy could run for the highest office in the land, and Archbishop Fulton Sheen was the most popular television personality of the decade.

And up to a point, none of that came at the cost of compromising the Catholic faith. Sheen was an absolutely prophetic voice against the evils of his time, never backing down on the timeless teachings of our Church. And Kennedy was already well on his way to the presidency and gaining in popularity among American voters everyday before his (somewhat infamous among thinking Catholics) speech downplaying the influence of the Church in his public life.

The “dissident” Catholic is a dying breed. Paradoxically the Church in America could very well be poised for a new springtime of faith, ironically helped by the attacks on her believers. Kamala Harris’ screeds are empty threats. It’s up to us to call her bluff.

CatholicVote: Some people might feel the influence of the Church is waning now. After all, when a Kamala Harris attacks Catholicism, she doesn’t exactly seem to suffer for it. Instead, she’s in the White House! Should Catholics feel confident anyway? Where does that confidence come from?

Brian Burch: Enough with Kamala Harris. I prefer to focus on what really matters. As they say, the greatest story ever told. Except it’s not just a fantasy. It’s 100% true. That God became one of us, and left us the Church to lead us back to Him for all eternity. From the liturgy, to the saints, our beauty and art, and the great Catholic intellectual tradition, we have been given something truly special. Some call it “the more excellent way.” A way of living that makes life coherent, purposeful, and enchanting. One of the best ways to carry on this tradition is to tell stories. Tell the stories of those that have run the race. That’s what this book is all about.

Readers can join the CatholicVote Champions Club, and receive their own copy of the American Catholic Daily Reader, by clicking here.