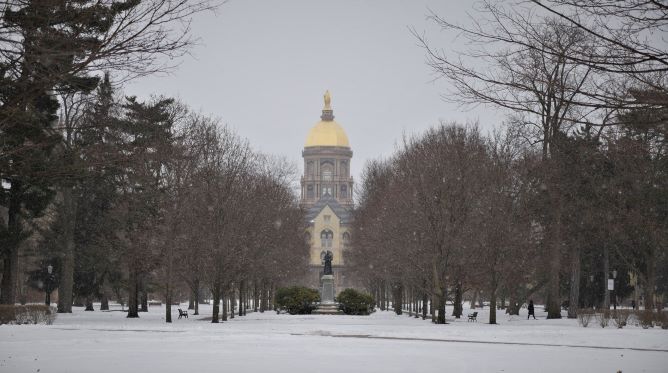 The letter from the Sycamore Trust is signed by “members of the Notre Dame community and others dismayed by the pro-abortion and anti-religious liberty agenda of President Joe Biden.”

It begins by taking issue with a comment Jenkins recently made in a recent interview. Notre Dame has “a long tradition of welcoming U.S. presidents to campus,” Jenkins told Crux’s Charles Camosy in January. “I believe that we can and should welcome elected leaders to our campus, respect what is honorable in their lives and work while we acknowledge where we disagree.”

The alumni letter points out that Notre Dame’s “long tradition” of presidential commencement speeches is not “unbroken.” President Donald Trump was not invited, and neither, years earlier, was President Bill Clinton.

The letter argues that, in any case, while “the university should be free to invite speakers who disagree with Church teachings,” it is another question whether Notre Dame should “honor them,” which “should be governed by the injunction of the nation’s bishops that ‘Catholic institutions should not honor those who act in defiance of our fundamental moral principles.’”

The letter cites a statement which the U.S. Conference of Catholic Bishops (USCCB) made in 2004, in response to another Catholic — John Kerry — seeking Catholic favor in his presidential campaign. Kerry, like Biden, is pro-abortion.

The letter also reminds Jenkins of the controversy that resulted when the University parted with the USCCB by honoring President Barack Obama in 2009, and argues that the principle against celebrating those who defy Catholic beliefs applies even more to Biden.

“Biden is such a person writ large,” the letter states:

He rejects Church teachings on abortion, marriage, sex and gender and is hostile to religious liberty. He embraces the most pro-abortion and anti-religious liberty public policy program in history. The case against honoring him is immeasurably stronger than it was against honoring President Obama, an action that alienated countless Catholics and brought upon Notre Dame the harsh criticism of 83 cardinals, archbishops and bishops.

The letter goes on to point out the unified opposition Biden has already elicited from Church leaders during his first few weeks in office, with quotations from Cardinal Timothy Dolan of New York, President of the USCCB Archbishop Jose Gomez, and Archbishop Joseph Naumann, chair of the USCCB’s Pro-Life Committee.

“By honoring Biden, Notre Dame would make a bad situation worse,” the letter states. “The University would be seen as little troubled by Biden’s actions, the voice of a more ‘progressive’ Catholic Church,” and “Catholics – including especially Catholic politicians — and others who share Biden’s views would be confirmed in their ruinous error while others would be newly led astray.”

Under the leadership of President Rev. John Jenkins, Notre Dame awarded then-Vice President Joe Biden the Laetare Medal, “the oldest and most prestigious honor accorded to American Catholics,” in 2016.

“I believe it is wrong for Notre Dame to honor any ‘pro-choice’ public official with the Laetare Medal, even if he/she has other positive accomplishments in public service,” the bishop stated, “since direct abortion is gravely contrary to the natural law and violates a very fundamental principle of Catholic moral and social teaching: the inalienable right to life of every innocent human being from the moment of conception.”

“I also question the propriety of honoring a public official who was a major spokesman for the redefinition of marriage,” the bishop continued:

The Church has continually urged public officials, especially Catholics, of the grave and clear obligation to oppose any law that supports or facilitates abortion or that undermines the authentic meaning of marriage. I disagree with awarding someone for ‘outstanding service to the Church and society’ who has not been faithful to this obligation.