After Biden’s Address: A Catholic State of the Union 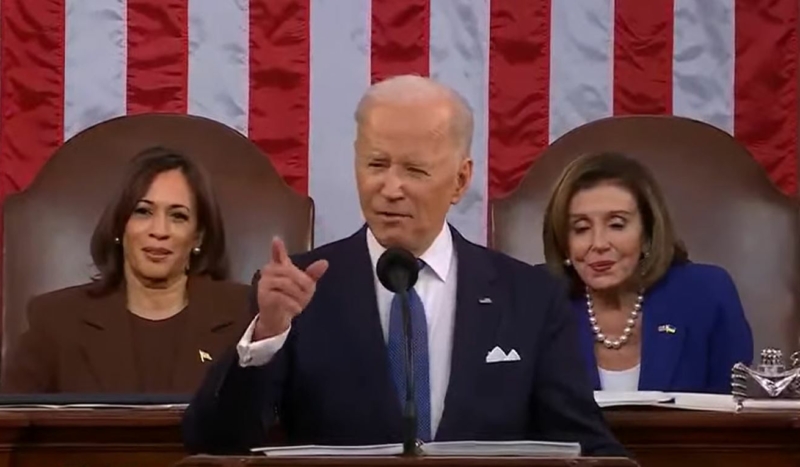 Recent polling has alarmed Democrat strategists, who have recommended an about-face in White House messaging. And at President Joe Biden’s first State of the Union address, he tried his best to navigate between the numerous issues on which the American public has generally been giving him failing grades.

Along the way, however, Biden did reiterate his total embrace of abortion. “The constitutional right affirmed in Roe v. Wade—standing precedent for half a century—is under attack as never before,” he said. “If we want to go forward—not backward—we must protect access to health care. Preserve a woman’s right to choose.”

The full text of the State of the Union address can be found here.

Catholic State of the Union

As many of you know, CatholicVote has been tracking the Biden administration from Day One in The Biden Report at our website.

Since he is only the second Catholic ever elected to the presidency, we thought now would be the right moment to summarize for you how Biden, a self-described “devout Catholic” who is pro-abortion and anti-family, is actually doing.

But what about issues of prudential judgment? What about areas where good Catholics can – and often do – disagree?

Are Biden’s policies hurting or helping? Is he a man of prudence?

Read on! Below you will find a Catholic “State of the Union” compiled by CatholicVote for the Insider.

The Insider is a weekly newsletter that provides the inside scoop from Washington, D.C. It’s normally an exclusive offering available only to members of CatholicVote’s Champions Club – those who support our work with a monthly donation of $10 or more.

We hope you enjoy this one look inside the Insider, and that you’ll consider becoming a Champion too, so that you can receive this in-depth resource every week.

The Biden administration has moved more aggressively than any previous presidential administration to promote abortion and to undo federal pro-life policies. On the issue of life, President Biden immediately reinstated pro-abortion policies such as taxpayer funding of abortions both nationally and internationally. The Democrat-controlled Congress then exploited the pandemic as a pretext to dump trillions in taxpayer dollars into left-wing legislation. Of those funds, they allocated billions to the abortion industry, which had absolutely no hand in the fight against the virus.

President Biden has gone out of his way to surround himself with staffers who are arguably even more pro-abortion than he is. To name just a few:

After making tremendous gains in the previous administration, religious liberty and conscience rights have suffered under the Biden regime.

Within weeks of being sworn into office, Biden revoked Executive Order 13831, which established a White House Faith and Opportunity Initiative. He thereby replaced the preservation of religious freedom as guaranteed by the Constitution with the woke language of “partnership” between the government and religious entities. Who is eligible for such a “partnership”? Only those who do not hold Christian beliefs that the LGBT agenda rejects.

Biden also released a statement supporting the House’s passage of the “For the People Act” (H.R. 1). This act establishes a federal takeover of elections, removes barriers to voter fraud, forces the disclosure of certain donor lists, and institutes a religious litmus test for eligibility on redistricting commissions.

Internationally, Biden Secretary of State Antony Blinken repudiated the findings of the Trump administration’s Commission on Unalienable Rights, which sought to focus America’s attention on human rights as enumerated in our founding documents and the Universal Declaration of Human Rights.

Perhaps most damning of all, Joe Biden is responsible for the disastrous withdrawal from Afghanistan that catalyzed the quick rise of the Taliban, endangering religious minorities (including Christian converts). Under President Biden, religious minorities trapped at the mercy of the Taliban in Afghanistan were not granted Priority 2 refugee status.

JOE BIDEN AND THE FAMILY

President Biden and his administration have spent an inordinate amount of time dismantling the biological realities of male and female in federal policy and promoting the LGBT agenda.

President Biden even issued a statement in support of the Equality Act. In the statement, he reaffirmed his commitment to the LGBT agenda and called for the swift passage of this anti-life, anti-faith, anti-freedom bill.

As a candidate, Joe Biden promised to “shut down” the virus. However, more Americans died from COVID-19 in 2021 than in 2020. Instead of allowing the marketplace to distribute at-home COVID-19 tests, President Biden turned to the United States Postal Service. When faced with a shortage, a clueless Biden suggested to Americans: “Just Google” where to get one.

Meanwhile, Biden tried to mandate COVID vaccines for millions of Americans, further fracturing an already fragile economy. Even after the Supreme Court blocked his mandate on private businesses, the Biden administration continues its efforts to fire unvaccinated healthcare workers.

Biden’s own Centers for Disease Control and Prevention (CDC) Director, Dr. Rochelle Walensky, has admitted that the vaccines do not stop the spread of COVID-19 variants. Still, the CDC refuses to release the data they have collected over the course of the pandemic “because they might be misinterpreted as the vaccines being ineffective [sic].”

So inept has the Biden administration been in response to the pandemic that even a handful of Senate Democrats have raised the alarm.

No demographic has suffered more during the pandemic than American kids. Biden vowed to re-open schools upon his election, but has instead worked behind the scenes with teachers’ unions to put the interests of bureaucrats and lobbyists above the needs of students.

If you were a parent who publicly complained about your school being closed, the Biden administration’s Department of Justice worked with the National School Board Association to label you as a “domestic terrorist.” The Biden administration is so busy teaching our kids the theory that everyone is a racist and that men should be able to dominate women in sports that they have no time to be concerned about some nosy parents.

JOE BIDEN AND THE ECONOMY

Inflation is taxation, and it has gone up every month of Biden’s presidency. Inflation in January increased 7.5% year-over-year, the fastest pace in 40 years and the eighth straight month in which inflation rates exceeded 5%.

Now, Americans are paying more for everything. Last year, Biden’s economic crisis cost the average worker nearly two paychecks, while real wages decreased 8 out of 11 months since his first full month in office. The severity of this inflation was directly fueled by the reckless, far-Left spending spree that every single Democrat voted to ram through at President Biden’s behest. Families are living with the consequences every day.

Everyday items for which ordinary people budget are seeing major price increases. Gasoline is up about 49% since this time last year. Used car prices are up about the same. Meats, fish, and eggs cost over 12% more than they did just one year ago. Natural gas, which heats nearly half of American homes, has soared by 24%. Fuel oil has shot up by almost 47%.

The cost of essentials has absolutely exploded since the Washington Democrats took power.

JOE BIDEN AND THE BORDER CRISIS

In 2012, Cardinal Timothy Dolan sent a letter to the House of Representatives on the ever-present issue that Congress ignores – immigration. He wrote: “Of particular concern to us and our brother bishops is the impact our broken system is having on immigrant families… Children are often the innocent victims of these policies.”

President Biden’s actions over the course of his presidency confirm that the more liberal an administration’s border policies are, the more chaos and harm they create.

As always, children suffer most from this failure.

President Biden and Congressional Democrats’ open border policies have created the worst border crisis in recorded history. Over 1.7 million illegal immigrants have been apprehended at our southern border since Biden was sworn in. The number of illegal crossings at the border has risen at a faster rate under Biden than at any time in recent history.

The Biden administration is actively breaking federal immigration law by flying illegal immigrants into American cities. The Transportation Security Administration has been allowing illegal immigrants to show their arrest warrants in lieu of proper identification. The result? The complete breakdown of the enforcement of basic safety and accountability measures for migrants: Out of 104,171 migrants issued Notices to Report by ICE between the end of March and the end of August 2021, 47,705 failed to report within that timeframe.

These practices have made the United States more dangerous. Criminal drug cartels are flooding the U.S. with counterfeit pills. More counterfeit pills have been seized so far in 2021 than in 2020 and 2019 put together, with two out every five pills containing a potentially lethal dose of fentanyl.

An unthinkable amount of fentanyl and fentanyl-related substances are streaming across our border from the south. Under President Biden’s watch, more pounds of fentanyl were seized at the southern border in 2021 than in the previous two years combined.

During his campaign, then-candidate Biden promised to “end the opioid crisis.” He has actually found a way to make it worse.

More sobering still, Biden’s border policy has also increased the power of human traffickers, who are exploiting vulnerable families and selling their children into sexual slavery.

THE DEMOCRATS AND CRIME

Following two years of defunding the police language from President Biden and Congressional Democrats, at least 16 cities have set new homicide records in 2021, according to local police departments. In 2021, 346 officers were shot, 63 of whom died. Also that same year, there were 103 ambush-style attacks on law enforcement officers, a 115% increase from 2020.

This did not happen in a vacuum.

President Biden famously expressed support for the Defund the Police movement during an interview in 2020, but was forced to walk back his position after public backlash. Vice President Kamala Harris applauded Los Angeles Mayor Eric Garcetti for defunding the police. Rep. Alexandria Ocasio-Cortez, D-NY, made her feelings clear when she railed, “Defunding police means defunding police.” Her “Squad” sister Rep. Ayanna Pressley, D-MA, said she supports efforts to defund police departments. Rep. Ilhan Omar, D-MN, went even further, saying: “Not only do we need to defund, we need to dismantle” police departments.

There is no greater example of the failure of President Biden’s foreign policy than the disastrous fall of Afghanistan to the Taliban.

Ignoring many of the safeguards for transition set by the previous administration, the Biden administration proved a weakened and feckless government. Who can forget the scenes of American diplomats being airlifted from the rooftop of the embassy in Kabul? It is unforgivable that 13 U.S. servicemembers were killed in an ISIS-K terrorist attack at the Kabul airport in the deadliest day for American troops in over a decade. To top it off, the Biden administration left Americans behind in Afghanistan, where some remain to this day.

The United States also left behind billions of dollars’ worth of weapons in Afghanistan, essentially arming the Taliban and guaranteeing their dominance in the region for decades to come. Watchdog organization Open the Books estimated that 650,000 weapons, including 350,000 M4 and M16 rifles, 65,000 machine guns, 25,000 grenade launchers, and 2,500 mortars and howitzers are now in the Taliban’s hands. Other reports include 600,000 assault rifles, some 2,000 armored vehicles, and 40 aircraft, including Black Hawks.

Biden’s Afghanistan debacle damaged American standing in the eyes of other superpowers. On the campaign trail, Biden promised to “put Russia on notice.“ Russian President Vladimir Putin “knows me,” Biden said. “The reason he doesn’t want me as president is that he knows me and knows I mean it.” And yet as president, Biden sat on his hands and watched a slow-motion crisis unfold. Biden did nothing as things went from bad to worse – until finally Russia invaded Ukraine.