Afghanistan: Catholic Apostolate Has Been Quietly Saving Lives for a Year 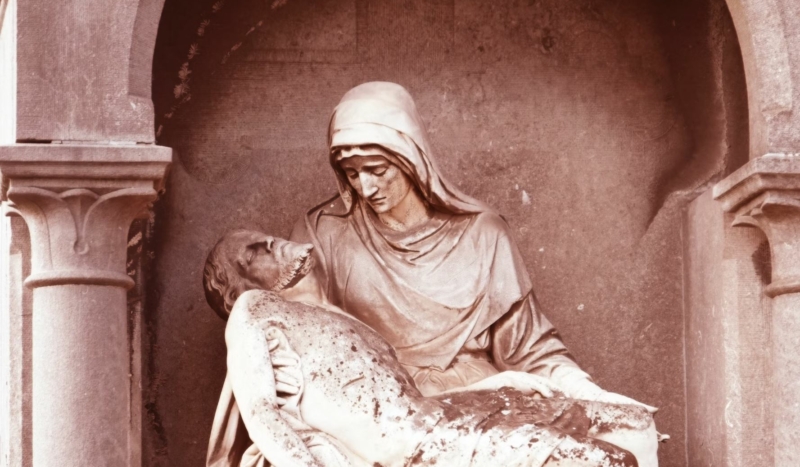 CV NEWS FEED // The Biden administration’s botched withdrawal from Afghanistan in August 2021 was the biggest global news story, some said, since the fall of the World Trade Center in 2001.

But as the story of the fall of Afghanistan into the hands of a ruthless Taliban regime faded from mainstream news, human rights worker Jason Jones and his Catholic apostolate the Vulnerable People Project (VPP) remained fully immersed in the tragedy’s aftermath.

One year later, VPP is telling the story of the fall of Afghanistan – even as too many in both the media and the humanitarian world have fallen silent.

For Jones, this was never just a news story – and it’s still far from over.

“The mission of the Vulnerable People Project is best exemplified by the Pieta,” Jones told CatholicVote in an August 12 interview.

The Pieta (pictured above) is a sacred art piece by Michelangelo which depicts Mary the Mother of God cradling the Body of Christ on her lap after His crucifixion. “We want to be with those who are suffering most in the world,” Jones explained. “As Our Lady held her Son, we want to care for her children who are brutalized and facing genocide.”

Jones pointed out how the Biden administration’s rhetoric took Americans and their Afghan friends by surprise – throwing thousands into mortal danger almost overnight.

As late as July 8, 2021, Biden was still assuring them that they were in good hands – and that he would never abandon them.

“Is the Taliban takeover of Afghanistan now inevitable?” a reporter asked the president at a press conference that day. “No. It is not,” Biden replied. “The Taliban is not the North Vietnamese Army. They are not remotely comparable.” He added: “There’s gonna be no circumstance where you’re gonna see people being lifted off the roof of a embassy of the United States [sic].”

That “Saigon moment,” as journalist Jake Tapper called it, happened just over a month later.

On August 15, 2021, the uncanny images dominated every newspaper and TV station: U.S. helicopters lifting clamoring crowds from rooftops in Kabul. Some desperate Afghans clung to U.S. transports as they took off – and fell to their deaths.

But the Biden administration’s rhetoric remained focused – not on the human tragedy left in the wake of their catastrophically failing withdrawal, but on saving face.

On August 18, 2021, President Biden told interviewer George Stephanopoulos that he was committed to making sure every American citizen would get out of Afghanistan before the withdrawal was completed.

When Stephanopoulos pressed him about the Afghan allies who had worked alongside Americans during the occupation, Biden promised that he would get “all Americans out, and our allies out. …We’re gonna get those people out.”

About a week later, on August 26, countless Americans and Afghan allies remained trapped in Afghanistan. And on that day, a terrorist group detonated a bomb at Abbey Gate in the Kabul airport, where Americans and Afghans had heard they must gather if they ever hoped to be evacuated. The blast killed nearly two hundred, including civilians and 13 American service members.

While Others Walked Away, VPP Kept up the Race

By this point VPP had already begun responding to requests for help from those trapped under the newly formed Taliban regime. But their most trying work was still ahead of them.

VPP recently compiled a short video with comments from various people they have partnered with to get vulnerable people left behind by the withdrawal to safety.

In the video, Sister Dierdre (“Dede”) Byrne of the Little Workers of the Sacred Heart expressed “deep gratitude” for VPP, which she called “one of the most phenomenal organizations that I’ve ever been a part of.”

In 2008, Byrne worked as a surgeon in Salerno, Afghanistan alongside a number of Afghani civilians who aided in ministering both to U.S. military personnel and to the local poor, she said. In December of last year, Byrne received a phone call from the son of an Afghani doctor who served the poor with the Sister over a decade earlier.

His mother “had been captured by the Taliban and for three days severely harassed,” Byrne remembered him saying. “Why? Because she had been our friend – [a friend to] Americans.”

The Taliban let the doctor go, but she and her whole family were left “in deep, deep fear,” Byrne said. “I was stunned when he said, ‘Please help us get out of Afghanistan,’” Byrne recalled. She said a prayer: “Lord, who am I? I’m a nobody. How can I help?”

The next morning, she mentioned her conundrum to a group of friends, and they “put me in touch with probably one of the most remarkable men I’ve ever met and the most incredible program I’ve ever met, and that is Jason Jones and the Vulnerable People Project.”

VPP “got the family food, coal, and a safe haven for about three weeks,” Byrne said. “And then a few days later I get a text from Jason saying, ‘Sister, pray. They’re going across the border.’”

“Somehow, some way, through the Vulnerable People Project Jason got 13 members of this beautiful family in three vehicles safely across the border from Afghanistan to an unnamed country on the other side.” Byrne said:

I am dumbfounded by the quick, rapid response that the Vulnerable People Project had done, and how this beautiful family and thousands of families that Jason has helped and helped not only in Afghanistan but in China and Ukraine and worldwide.

Zainab Baqiri, an Afghan humanitarian aid worker, fled Afghanistan after the fall. Baqiri is a member of the Hazara people, who “were among those who contributed the most to Western-backed development in Afghanistan” over the last two decades, she said. “Supporting democracy, however, has cost us a lot of lives, and has put us [in the position of being] the main target of attacks by terroristic groups like the Taliban and ISIS.”

When the Taliban took power, the situation of Hazaras became “incredibly worse,” Baqiri said. The Taliban has driven away United Nations groups seeking to provide aid to the Hazara people in Afghanistan, she continued:

However, luckily, I came across VPP, and I got the chance to voluntarily cooperate with this wonderful team. VPP has stepped forward and distributed food aid to the Hazara community for the first time, and they managed to cover thousands of poor Hazara families last winter to survive hunger.

They also, as the first American NGO [to do so], committed to supporting Hazara schools [and have been] providing a school with security equipment like guards and CCTV’s to protect them from future imminent attacks.

“Last year when Afghanistan fell, there were six Christian Afghans that reached out through a friend of mine, and they asked to be saved because they had served the American interests in Afghanistan and then they were left vulnerable,” Taimoorazy recalled:

I immediately called Jason and I asked him for help. I called many people, but really the only one who answered the call was Jason. You, Jason, seamlessly, very quickly started the process and you saved these six women’s lives. And I am forever grateful to you. …God bless you for everything you have done and you will continue to do.

Brittany Green, Executive Director of Radiance Women’s Center in Pflugerville, TX, recounted a similar story. In Green’s case, however, her first introduction to the plight of Afghans after the Taliban takeover was a couple who came to her clinic last fall with an unexpected pregnancy.

“Not only were they pregnant and didn’t know what to do, they had been facing homelessness due to a lack of resources available to them, and on top of that they had been tragically separated from their one-year-old son who had been left behind in Afghanistan,” Green said. “Their situation to them felt hopeless.”

Green had “no idea” how she could help the couple, but “we knew that their most basic needs had to be met.”

“We connected with Jason, and … after our first meeting, within less than twelve hours, he had food, coal, other additional resources, formula and diapers delivered to this refugee couple’s family in Afghanistan who were taking care of their child until we could figure out how to reunite them,” Green said:

Not only were their family’s needs in Afghanistan met, Jason stepped in to make sure that their immediate needs for shelter and food were taken care of until we could establish long term housing for them here in Austin. What felt hopeless became hopeful. Not only was it hopeful, it was tangible hope.

“What Jason has done for this family gave them the courage that they needed to be able to step forward to move forward in creating a new life here in Texas in the hopes of one day being able to welcome their son here in America,” said Green. The VPP team is still “working hard to figure out a plan” to reunite the family in the U.S,” she added. “We are really looking forward to the day when that is going to take place and we trust that it is going to be soon.”

Alejandro Bermudez, EWTN host and former executive director of Catholic News Agency, was very pointed in what he had to say about VPP. “I was approached by a group of Christians in Afghanistan after it was taken over by the Taliban,” he said, “and without the help of Jason Jones and the Vulnerable People Project those guys [would] be dead today.”

Bermudez said he is proud of partnering with VPP to save the lives of his contacts in Afghanistan because Jones “has carried the ball all the way” even “until now.”

The mission continues, Bermudez said, but Jones “is still deeply committed, and delivering – first in saving their lives and getting them out of Afghanistan, and now working together to find a place for them.”

Standing at the Foot of the Cross

Today, the news has largely moved on, and so have numerous humanitarian organizations, including aid groups connected with the U.S. government. “When you do humanitarian work there is always a Palm Sunday,” Jason Jones said Friday, “but then there’s the Cross.”

“When they are truly being nailed to the cross the crowd has long since been dispersed,” he said. “VPP is one of the last organizations in the world working on the ground in Afghanistan. Now that the U.S. government and all its billions of dollars have left, I can promise you that standing with Afghan women and minorities is a very lonely mission.”

Again invoking the image of the Pieta, Jones said that he and his team will continue to be present to the vulnerable still left at the mercy of the Taliban in Afghanistan.

Readers who would like to view VPP’s video featuring comments from their friends and partners can find it here: https://vimeo.com/738735654