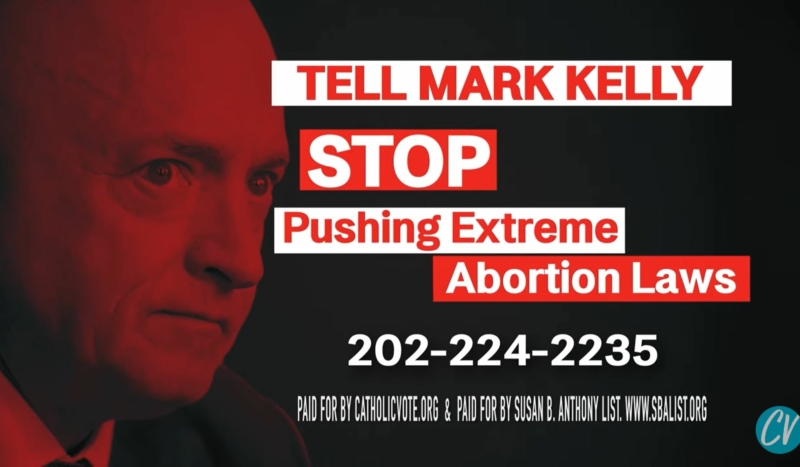 CV NEWS FEED // Brian Burch, president of CatholicVote, announced Wednesday that his organization is contributing to an ad campaign led by the Susan B. Anthony List that targets Sen. Mark Kelly, D-AZ, a self-professed Catholic who voted for the radical abortion bill just defeated in the Senate.

“Yesterday the powerful Susan B. Anthony List announced a massive new ad campaign in Arizona focused on ‘Catholic’ Senator Mark Kelly,” Burch wrote in an email to supporters. “CatholicVote is helping fund a portion of this campaign.”

“Don’t forget Kelly just voted for the extreme abortion bill on Monday,” Burch said, referring to the so-called Women’s Health Protection Act. “And Kelly is considered one of the most vulnerable Senators seeking re-election. We’ve already committed $100,000 to this campaign. And we’ve got more ads planned in other states.”

Burch cited a moment that occurred on Ash Wednesday, when President Joe Biden deflected when a Catholic reporter asked him: “As a Catholic, how do you support abortion, defying Church teaching?”

“I tell you what, I don’t want to get into a debate with you about theology,” Biden said.

“The question is an excellent one,” said Burch. “And not just for Joe Biden, but for every Catholic member of Congress and the U.S. Senate – including those who just voted for the most extreme abortion law ever introduced.”

“Catholics have to fight for what we believe. We have to hold our elected officials accountable.

This is why CV exists,” said Burch.