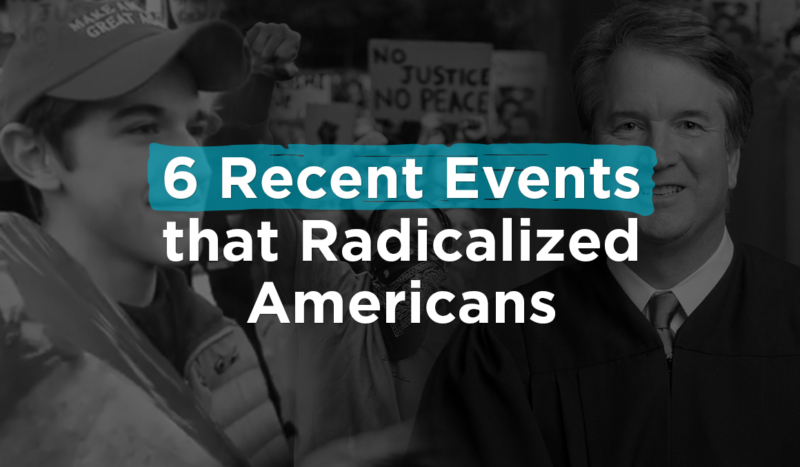 Here are six stories from the last six years that showed Americans of all political persuasions how truly far out of the mainstream the radical left has gone.

If you’re feeling the worsening political divide in America, also check out the EDIFY video on “Why is the Political Divide Worsening?” – and learn what we as Catholics can do about it.

The initial hostility of the Left towards President Trump’s 2018 nomination of Judge Brett Kavanaugh to the Supreme Court was unsurprising, but quickly exploded into a political circus of staggering proportions. The Democratic National Committee tweeted, “Let’s be clear: A vote for [Kavanaugh] would be a vote to rip health care from American families and deny women their right to make their own health care choices.”

During the hearings themselves, Democratic senators on the Judiciary Committee did everything they could to shut down the hearing, interrupting Republican senators over 40 times – with activists shouting from their seats – all during the first day. Sen. John Cornyn, R-TX, said: “This is the first confirmation hearing subject to mob rule.”

Their childish behavior and dire warnings were followed quickly by an all-out character assisination campaign.

Although Senate Democrats had known for months that a woman named Christine Blasey Ford had accused Judge Kavanaugh of sexual assault, they kept it secret until the 11th hour, hoping to maximize damage to the Judge. On top of that, they floated ridiculous gang-rape charges from Julie Swetnick and spread over all mainstream media by lawyer Michael Avenatti (of Stormy Daniels’ fame)..

The hearings became such a farce that Democrats even began grilling Kavanaugh about his high school yearbook.

The Democrats’ gloves-off viciousness convinced millions of conservatives, moderates, and independents that the time for compromise was over – because the far Left had murdered it. Conservatives realized that even with President Trump in office the leftist machine was more than willing to brush aside any lessons it should have learned from the 2016 election – and destroy a good man in the process.

Nick Sandmann… “We are going to bury your son.”

Nick Sandmann was 16 when he went viral. After the 2019 March for Life in D.C., he was waiting to catch a bus home when his MAGA hat caught the attention of a Native American protester, whose aggressive drumming and chanting in the boy’s face caught national attention.

Sandmann then endured an online avalanche of vitriol from tens of thousands of people on social media, convinced that Sandmann was a white supremacist Trumper bent on insulting the drummer. The mob was fomented from totally biased and false reporting by The Washington Post and CNN.

Who can forget Bill Maher saying he blamed that “f$%ing kid…the little pr$ck”? Or CNN contributor Reza Aslan, who suggested someone should punch Nick in the face?

The Sandmann family endured unspeakable attacks, threats of violence, and worse – while billion-dollar corporations fomented the onslaught. Like tens of thousands of Catholic school students, Nick Sandmann simply wanted to stand in solidarity for the unborn during the annual March for Life in Washington, DC.

Americans took note, and many concluded: This could be my son. It’s one thing when they malign or smear a politician, but now the media is perfectly happy to viciously attack a Catholic high school student because it makes for great TV. Catholics will never forget how the media treated Nick Sandmann.

Politicians and Covid-19 “Rules for Thee…”

So when video footage surfaced of the political elites completely disregarding Covid-regulations that they imposed on us, millions of Americans were downright furious.

We saw Nancy Pelosi enjoying a day at a salon that had been shuttered for months by California’s harsh Covid regulations.

Governor Gretchen Whitmer, D-MI, enjoyed a night out at a bar. Unmasked.

Congresswoman Alexandra Ocasio-Cortez enjoyed a “taste of freedom” with a mask-free night out in Florida after excoriating Gov. Ron DeSantis’ Covid-19 policies.

The list of leftist politicians with their “rules are for thee, not for me” approach to Covid sent many Americans running to the right on the political spectrum. It also  seriously damaged the effectiveness of the same politicians’ admonitions to “stay home, stay masked, and get vaccinated.”

Suddenly, in June 2020, after two months of lockdowns – and shutting down churches and small businesses – public health officials made an about face and announced that Americans could leave their homes and join in on large gatherings.

Why? Because these large gatherings were Black Lives Matter marches.

Public health officials actually encouraged Americans to “take to the streets” and join the BLM protests in cities across the country.

Did this mean churches could open back up and small businesses could open their doors? Of course not. Restrictions remained in place on such “non-essential” American activities as work and worship. After all, they weren’t “urgent” like the BLM protests.

Needless to say, public trust in health experts collapsed rapidly by the lightning-fast switcharoo. Especially when researchers at such institutions tweeted out their public support for the riots. Jennifer Nuzzo, a Johns Hopkins epidemiologist, tweeted:

Anyone who disagreed was labeled a racist or worse. The BLM riots of the summer of 2020 crystallized for many the utter corruption of American political and public institutions for ideological purposes.

In the final days of the 2020 presidential campaign, Facebook and Twitter actively blocked users from posting links to a New York Post story on candidate Joseph Biden’s son, Hunter and his laptop. This came after Twitter suspended the newspaper’s social media account.

Twitter users attempting to share the story to their own followers were told by the social media giant: “We can’t complete this request because this link has been identified by Twitter or our partners as being potentially harmful” and a warning that the “link may be unsafe.”

Both platforms doubled down amid the backlash and accusations of trying to influence the election by censoring information.

“This is part of our standard process to reduce the spread of misinformation,” protested one spokesperson from Facebook.

Many conservatives had until then assumed Twitter and Facebook were free speech zones (after all, this is America, right?). The heavy-handed censorship from these social media titans proved that these tech companies are fine with Americans sharing pictures of our food or talking about the latest Hollywood movie, but are more than willing to shut users down if they share political views that the social media titans disagree with.

The blinders were off: America’s “information highway” is controlled in fact by an elite minority oppressing the vast majority.

The Hunter Biden info suppression definitively confirmed that these platforms were anything but neutral. In fact, Twitter and Facebook’s messaging was to gaslight anyone who complained and accuse them of spreading “Russian disinformation.”

These social media sites were determined to get Donald Trump out of office and they were willing to do anything to further that goal – from suppressing damaging stories to banning accounts that they felt hurt their preferred candidate. It was election manipulation on a scale that most Americans had never seen before.

In January 2022, emails surfaced demonstrating that Education Secretary Miguel Cardona had solicited a memo from the National School Board Association (NSBA).

In that memo, the NSBA called on President Joe Biden to take action against parents “threatening” school board members at contentious public meetings over critical race theory.

Without providing any documented evidence, letter claimed that “extremist hate organizations” were hijacking school board meetings, and that school board protests should be characterized as “equivalent to a form of domestic terrorism and hate crimes.”

As a direct result of this letter, Attorney General Merrick Garland publicly called on the FBI to investigate local threats against school boards. He continued to defend and clarify this mobilization.

What little hope remained among conservatives that they could trust “the system” to hear their concerns and respond respectfully was shredded. Parents became increasingly convinced that the public education system was pitting them against their own children – and was more than happy to cancel anyone who dared to object.

And so the exodus from the public school system that began with Covid-19 disillusionment was supersized by the disdain of educational elites for the “deplorables.”

What do you think? What events have most impacted your political outlook in recent years? Leave your thoughts in the comments below.