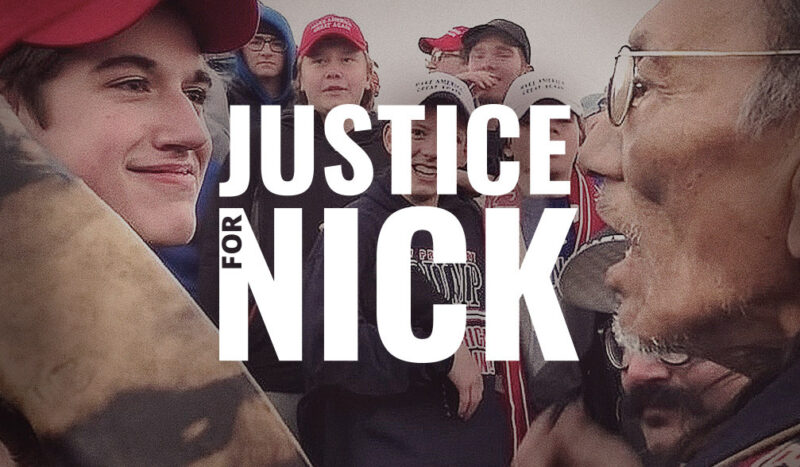 There wasn’t a dry eye in the room….

Ted Sandmann had to collect himself as he read the text message he had received:

Last week I spent several days with Ted and Julie Sandmann — the parents of Covington Catholic teen Nick Sandmann. Ted and Julie agreed to share the inside story of what really happened to their son and why they are now fighting back.

As they told their story, you could have heard a pin drop. They shared how Nick told his mom what actually happened, how friends and relatives started calling after watching the news, and how they had to flee their home, including the scary stories of how Nick’s school was then shut down due to bomb threats as the FBI and Department of Homeland Security got involved…

Growing emotional, Ted composed himself and said: “they picked on the wrong family.”

The Sandmann family has now sued The Washington Post and CNN. They are seeking justice for their son — and for everyone slandered by the media. It’s a David v. Goliath battle, and they are now fighting some of the biggest corporations in America.

The Sandmann family has chosen CV to help fund their lawsuits against these major media corporations!

I am sure you remember Nick. He endured an online avalanche of vitriol from tens of thousands of people on social media. The mob was fomented from biased and false reporting by The Washington Post and CNN. Who can forget HBO anti-Catholic bigot Bill Maher saying he blamed that “f$%ing kid…the little pr$ck.” Or the CNN contributor who suggested someone should punch Nick in the face.

The family has endured unspeakable attacks, threats of violence, and worse. Today when people see a picture of Nick, millions of people think he is a bigot, a racist… and want to punish him. His life has been changed forever. Because of media lies.

But who will hold the media accountable?

It could happen to you.

Suing a massive global corporation like CNN or the Washington Post is not easy. Nor is it cheap. We’re working with the Sandmann family attorneys. The lawyers won’t be paid unless they win the case. But there are real costs that the Sandmann family must pay, including fees for experts, investigation costs, research, depositions, court costs, travel, and much more.

All of it is necessary if we want them to succeed in court, and hold these elite media bosses accountable!

Like tens of thousands of Catholic school students, Nick Sandmann simply wanted to stand in solidarity for the unborn during the annual March for Life in Washington, DC.

And now it’s our turn to show solidarity with the Sandmann family.

I’ve promised them our support.

P.P.S. To chip in via mail to the Nick’s Legal Defense Fund you can send a check made payable to CatholicVote Legal Fund to: P.O.Box 259837, Madison, WI 53725. Please note “Sandmann” in the memo.