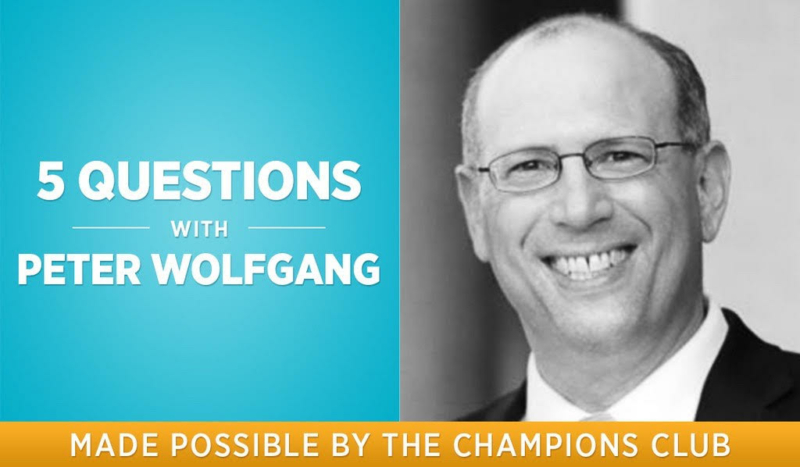 CV NEWS FEED // Peter Wolfgang is President of the Family Institute of Connecticut, and a longtime friend to CatholicVote. In many ways he’s also an example of what it looks like to pursue CatholicVote’s own mission: to live out the truths of our faith in public life.

We had the pleasure of talking with Peter this week. Please enjoy that conversation below.

CatholicVote: First, what is the Family Institute of Connecticut and what does it do? To help illustrate, perhaps you could tell us about the recent efforts to legalize assisted suicide in Connecticut?

Wolfgang: Family Institute of Connecticut (FIC) is a “Family Policy Council” or “FPC.” An FPC is a state-based organization that fights for family values such as the right to life, traditional marriage, and religious liberty. There are FPCs in about 40 of the 50 states. We are all autonomous and responsible for raising our own funds. We are associated with Focus on the Family, the evangelical Protestant ministry from which the idea for FPCs first sprung. Family Research Council is our Washington ally and Alliance Defending Freedom is the legal arm of the FPCs. Another entity, Family Policy Alliance, plays a key role in linking the FPCs to Focus on the Family and to one another. The FPCs are the tip of the spear for the pro-family movement on the state level. Though an ecumenical movement, the vast majority of FPCs are headed by Evangelicals. I am one of only about five FPC leaders who are Catholic.

FIC is made up of three legally separate entities. Our c3 is focused on education, making the public aware of threats to the family in Connecticut and what they can do to counter those threats. Our c4 does a wide range of things, including lobbying at our state Capitol. Our political action committee works to elect pro-family candidates to the state legislature and to defeat anti-family legislators.

In the matter of assisted suicide, FIC formed an unusual alliance with progressive left-leaning disability rights activists to defeat it. In years past, we were the group that led the fight against same-sex marriage in Connecticut, bringing literally thousands of people to the Capitol on several occasions to stop it. Now, in the fight against assisted suicide, I am at the Capitol lobbying side-by-side with liberals who have the gay rainbow flag hanging off their wheelchairs. It has been a strange experience but very rewarding. Our cross-ideological alliance has kept opponents off-balance and has helped to defeat assisted suicide in Connecticut for nearly a decade.

CatholicVote: At one point in your life, you might have been called a “liberal Catholic.” Tell us about the journey from there to where you are now.

Wolfgang: It is amazing that I ever became a conservative, politically or theologically. Growing up in Connecticut, every adult influence in my life was a liberal. All my friends were liberal.

I came of age in the immediate wake of Vatican II, born three weeks after the Novus Ordo became the standard Mass. The Church had just abandoned the Baltimore Catechism but had not yet settled on a replacement. My CCD classes in the 1970s and early 1980s essentially amounted to “Jesus loves you, now go make a collage.” In high school, we had a liberal youth minister who downplayed the distinctiveness of Catholicism. In my 20s, we had a pastor who was essentially an America Magazine guy. As a result, I immersed myself for a time in the world of dissident Catholicism: attending Call to Action conferences, subscribing to the big three periodicals of Catholic dissent (Commonweal, America, and the National Catholic Reporter), etc.

My politics were likewise liberal. With one big exception: abortion. The more I saw how committed my secular liberal friends were to abortion, and the more I saw how unserious the Catholic Left was about its nominal support for the pro-life cause, the harder it was for me to stay a liberal. The Left’s blindness on the evil of abortion caused me to question many of their other claims to holding the moral high ground. I began reading political and theological conservatives and discovered my true home. The late Fr. Neuhaus, in particular, was a big influence. What William F. Buckley and National Review were for many conservatives is what Neuhaus and First Things were to me. That Neuhaus’ career was a bridge of sorts between Martin Luther King’s civil rights movement and St. John Paul II’s pro-life movement meant a great deal to me, given my particular journey.

CatholicVote: While you’ve undergone some change, so has the political right writ large. Democrats now represent 65% of taxpayers with a household income of $500,000 or more, whereas Republicans are winning over working-class black and Hispanic voters. What’s behind this realignment? Is it substantive? Will it be permanent? Is it a fluke?

Wolfgang: It’s not a fluke. The Democrats are increasingly the party of the rich while the Republicans are already the party of the working class. This realignment shatters what had been a steady division in American politics for nearly a century. It will take some time for the new political reality to sort itself out. But when the dust settles, there will be surprising new alliances… and enmities. Corporate America is now the enemy of the American family. We see this especially every June, when they unfurl the rainbow flag everywhere, as if we were a nation under occupation. People resent that, even if they don’t quite know how to respond to it yet. I don’t think the Republican Party will be the friend of big business much longer in the world of Woke Capitalism.

The other notable thing is that racial and ethnic politics may play out in ways that will disappoint the Left. I see this even in my lobbying in the deep-blue state of Connecticut. Our best friends inside the Democratic Party are the Black and Hispanic Caucus. They are often the most conservative Democrats. The white liberals tend to be the more unhinged actors on the political stage. They may become increasingly isolated, disowned even by the minority communities for whom they claim to speak.

There are internal centrifugal forces pulling at the conservative coalition as well. Questions that, as of right now, remain unanswered. Can former President Trump still deliver or is the magic gone? Will we focus on fighting the extreme agenda of the Biden administration or lose ourselves in conspiracy theories and cults of personality? Somehow we must discern between the legitimate concern that our public institutions have gone off the rails without going down rabbit holes of internet craziness from which there is no coming back. And we will have to do so under the glare of a media spotlight that is focused on our challenges while largely ignoring those of our opponents.

CatholicVote: Tell us about difficulties you’ve encountered in your work. What kind of blowback does a person like you, who publicly stands up for Catholic principles, face?

Wolfgang: A lot of people either love me or hate me. Friends from the first half of my life were gone within a year or two after we all got on Facebook. A gay activist sent me hundreds of anonymous letters, including threats on my life. (He was prosecuted for it by John Durham, the same person currently investigating the origin of the Steele Dossier.)

I once attended the annual dinner of “The Connecticut Council for Religious Understanding,” a local gathering of the religious Left. It was called the “Love Thy Neighbor Dinner.” At one point we were given the question “What does love of neighbor mean to you?” and told to engage the person sitting next to you. The guy next to me, a total stranger, told me that he knew who I was and that he would have a hard time explaining to his pro-choice wife that he had dinner with me. His answer to “What does love of neighbor mean to you?” was that it would be wrong of him to think of me “as less than an amoeba” without getting to know me first.

But I also get the reverse. It’s easy to forget the reach FIC has, that our email blasts go out to thousands of state residents, because very few of them write me back. But I could be stranded on the side of the road, having to call AAA to get my car towed, and the receptionist will recognize me and tell me how much she admires our work. Or the family whose classified ad we answered when buying a rabbit for our kids. Things like that.

I feel particularly strengthened by the presence of the Knights of Columbus in Connecticut. The man who threatened my life was prosecuted in federal court in New Haven, the city where the Knights were founded and where their Supreme headquarters is located. I know they were following the matter, that they had my back. When the hearing was over I went to St. Mary’s Church and knelt at the sarcophagus of Blessed Michael McGivney. He founded the Knights to protect families, and I could feel, especially in that moment, that he was protecting mine. And FIC’s mission of defending the family in Connecticut.

CatholicVote: What are some ways that others could follow in your footsteps in their own communities, living out the truths of our faith in public life?

Wolfgang: Start with prayer. Particularly the sacraments and especially confession. I am not any better or worse than anyone else. Having Christ feed me in the Eucharist and forgive me in the confessional is what keeps me going.

Stay close to your family. Upon the collapse of his first marriage, Ronald Reagan said “Perhaps I should have let someone else save the world and saved my own home.” The best thing you can do to save the world is to save your own home.

Don’t give in to “dhimmitude,” which was defined by Rusty Reno as “the mentality of those who have internalized their second-class status,” those who have accepted their subordinate role in society. That is what the Woke are attempting to do to anyone of traditional faith and values. That is the whole purpose of cancel culture.

Then, when you have nailed down those three things, stand up and fight. Join the FPC in your state. Volunteer for CatholicVote and other entities that are defending our Church and our culture. Encourage everyone around you not to accept their dhimmitude either. Through your words. But most of all, through your actions.