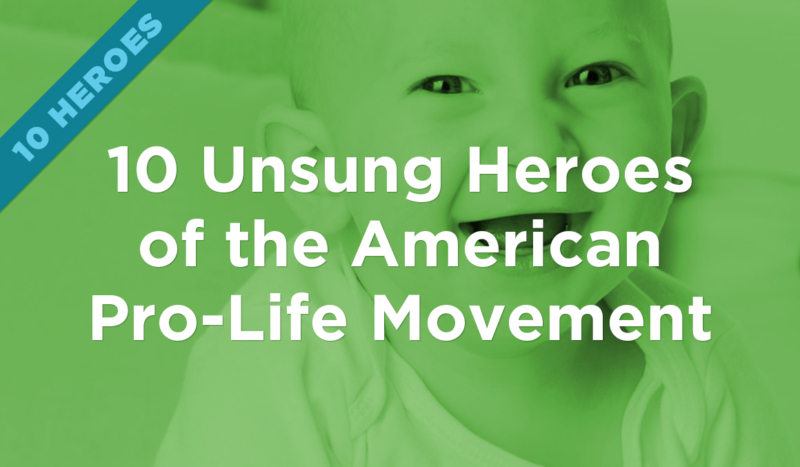 Christians and people of good will are celebrating the Dobbs victory across America – and all around the world. In our joy, we must never forget the hundreds of men and women who worked – within the bounds of the law – to make this moment possible.

These are the unsung heroes of the American pro-life movement that finally led to Dobbs victory. Only God knows the number of lives transformed and souls saved because of their heroic work.
Many of them didn’t live to see Roe overturned in their lifetimes, but they are surely rejoicing in heaven.

Bernard Nathanson (1926 – 2011) was once known as “America’s Abortion Doctor.” As Robert P. George wrote: “Few people, if any, did more than Bernard Nathanson to undermine the right to life of unborn children by turning abortion from an unspeakable crime into a constitutionally protected liberty. Someday, when our law is reformed to honor the dignity and protect the right to life of every member of the human family, including children in the womb, historians will observe that few people did more than Bernard Nathanson to achieve that reversal.” His 1984 film The Silent Scream made national headlines, documenting the final moments of an abortion – and was one of the first pro-life efforts to debunk the pro-abortion claim that the victim was “just a clump of cells.” As a former abortionist himself, Nathanson spent the last 25 years of his life testifying that abortion kills developing human infants. He was received into the Catholic Church by Cardinal John O’Connor in 1996.

Representative Henry Hyde has been called “the greatest American champion in the … fight for equal justice under law for the unborn child.” In the years following Roe, Hyde worked to abolish federal funding of abortion (between 1973 and 1977, Medicaid provided over 300,000 abortions using both federal and state funding). Hyde understood that law shapes citizens. Abortion isn’t a “private matter” – it  is a violation of the most basic duty citizens have towards each other, including the unborn. The Hyde Amendment, for which he fought so valiantly, codified into law the commonsense idea that American taxpayers should not be forced to fund the murder of their unborn fellow citizens. Some studies indicate that the Hyde Amendment saved over 2 million lives.

Judge Robert Bork (1927 – 2012) may never have sat on the Supreme Court, but his judicial originalism paved the way for the Dobbs decision. As the Court’s decisions became increasingly based on made-up Constitutional rights, Bork aggressively fought against its shoddy reasoning, judicial activism, and use of historic materials. He said, “The truth is that the judge who looks outside the Constitution always looks inside himself and nowhere else.” His writings and speeches directly influenced justices such as Antonin Scalia and Clarence Thomas, and the current Court justices who voted to overturn Roe’s terrible lawmaking.

Justice Antonin Scalia (1936 – 2016) stood in defense of the Constitution, free speech, the limits of judicial power, and the rule of law during the Court’s most activist years. He was one of the most consequential jurors and thinkers in American history – known for his witty and biting dissents in cases such as Planned Parenthood v. Casey. Without his presence and brilliant writings, the fight to overturn Roe – and preserve American democracy – could have failed in the face of the Court’s worst decisions. In his dissent from Obergefell v. Hodges, he succinctly summarized the utter departure from the Constitution that Roe v. Wade and its progeny took.

The opinion in these cases is the furthest extension in fact—and the furthest extension one can even imagine—of the Court’s claimed power to create “liberties” that the Constitution and its Amendments neglect to mention. This practice of constitutional revision by an unelected committee of nine, always accompanied (as it is today) by extravagant praise of liberty, robs the People of the most important liberty they asserted in the Declaration of Independence and won in the Revolution of 1776: the freedom to govern themselves.

Norma McCorvey (1947 – 2017) was the “Jane Roe” of Roe v. Wade, the poster child of the pro-abortion movement in the United States. And for years after, she was a rabid advocate of “abortion rights.” But by the 1990s, she had completely transformed. She founded Roe No More, a non-profit organization dedicated to pro-life advocacy, and publicly confessed the lies she had told and money she had been paid during the original Roe case in 1973. In 1995, she began promoting Operation Rescue and was received into the Catholic Church in 1998. She used her notoriety and name to try to overturn Roe for the rest of her life.

Nellie Gray (1924 – 2012) was working as a lawyer for the federal government in January 1973 when the Roe v. Wade decision was handed down. She immediately recognized that Roe (and its sister case, Doe v. Bolton) invalidated all state regulations and ended political debate about abortion. She was determined that this disaster for American democracy be commemorated and condemned by the people annually. In 1974, she organized the first March for Life around the U.S. Capitol, drawing over 200,000 protestors in its first year. When it became clear that overturning Roe would be a decades-long battle, Gray gave up her career to become the full-time volunteer president of the March and its principle organizer. The March continues to this day, often in bitter cold and snow – drawing hundreds of thousands of young, energetic pro-lifers from all over the country. She said, “We will be here until we overturn Roe v. Wade, and believe me, we are going to overturn Roe v. Wade.”

Mildred Jefferson (1927 – 2010), the first African-American woman to graduate from Harvard Medical School, was a co-founder of National Right to Life. She passionately and eloquently pushed for the equal protection of unborn children under law. A skilled orator, she articulated the deep betrayal many medical professionals felt at the abortion lobby’s use of medicine to justify the murder of innocent children in the womb. She also spoke to the civil rights aspect of abortion law – and the threat that Planned Parenthood and its allies posed to unborn black and minority children. She said, “I am at once a physician, a citizen, and a woman, and I am not willing to stand aside and allow this concept of expendable human lives to turn this great land of ours into just another exclusive reservation where only the perfect, the privileged, and the planned have the right to live.”

Cardinal John O’Connor (1920 – 2000), archbishop of New York, had a profound experience visiting Dachau concentration camp, the site of Nazi atrocities especially against Catholic priests. He vowed to spend the rest of his life defending human life, but saw that even his forceful preaching and programs were bearing little fruit. He tried a completely new approach and founded the Sisters of Life, a religious community of women dedicated wholly to the protection of the sacredness of every human life. In 1991, eight women responded to his ad in the local Catholic newspaper. Today, they number over 100 women from around the world, serving pregnant women, struggling mothers and families, and post-abortive fathers and mothers in New York, Colorado, Pennsylvania, Arizona, Washington, DC, and Canada. Their presence has changed the landscape of the Catholic pro-life movement in America, bolstering the spiritual battle behind the scenes with their joyful witness.

Joan Andrews Bell (1948 – ) was an early participant in the Operation Rescue movement of the late 1980’s, which organized peaceful protests blocking the entrances to abortion “clinics.” She was arrested over 100 times in 20 years, and spent 31 months in a Florida prison – where she would be held for months at a time in solitary confinement for refusing to stop her blockades upon release. Her raw courage inspired thousands and brought national attention to Operation Rescue – and the desperate need for a pro-life presence outside the abortion mills. Over the years America was under Roe, more programs developed to train protestors, sidewalk counselors, and intervention activists outside the death factories. Countless lives were saved.

Vicki Thorn (1950 – 2022) founded Project Rachel in 1984 to provide healing for mothers scarred by abortion. In the decade following Roe, she was working as a bereavement counselor and encountering more and more women devastated after abortions – and Catholic priests unsure of how to help them. She asked God for guidance, and opened her Bible to Jeremiah 31:15: “Rachel is weeping for her children; she refuses to be comforted… because they are no more.” Thorn died suddenly this year, but her legacy of mercy and compassion saved thousands of souls from the hell of being unable to forgive themselves. She offered hope after abortion.

Deirdre McQuade (1969 – 2022) died this year, too, after a battle with cancer at the age of just 53. For more than 10 years, she acted as the pro-life communications director at the USCCB. Her consistent and brave voice for life in American media was founded on years of working with women in crisis pregnancies in Indiana and also as the national program director for Feminists for Life.

Who are YOUR heroes of the last 50 years of pro-life advocacy and service? Let us know in the comments below.