We need to start talking about safely re-opening our country 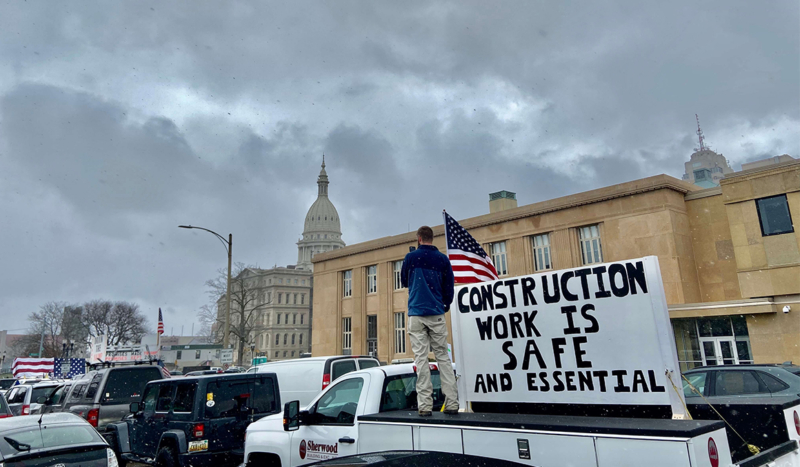 They were attending a drive-in church service in Greenville, Mississippi. Get this: They were listening to the sermon on the radio — with their windows rolled up — and still got fined.

Thankfully, Attorney General William Barr (a pro-life Catholic) was having none of that!

“The City of Greenville fined congregants $500 per person for attending these parking lot services – while permitting citizens to attend nearby drive-in restaurants, even with their windows open. The City appears to have thereby singled churches out as the only essential service (as designated by the state of Mississippi) that may not operate despite following all [Centers for Disease Control] and state recommendations regarding social distancing.”
Barr’s statement was enough to get Greenville Mayor Errick Simmons to back off. The mayor announced that citizens who received these fines will not have to pay.

But that’s not the end of it. Over in Michigan, Gov. Gretchen Whitmer has become a petty tyrant. Citizens in Michigan cannot travel to other people’s houses. In Michigan, you can’t even buy vegetable seeds to grow a garden, but you can buy marijuana and lottery tickets.

The elites in entertainment, academia, and the media can more easily telecommute and adapt to stay-at-home orders. But they’re out of touch with the hard-working Americans who live paycheck to paycheck or struggle to keep their small businesses afloat.

We need to start talking about safely re-opening our country and allowing people to earn a living again.

Anyone who dares to suggest reasonable options to re-open America — including churches — is accused of endangering grandmothers or placing greed and money ahead of public health.

It’s time to call these accusations out for what they are: ridiculous straw man attacks.

Let’s not forget that the primary purpose of the recent restrictions was to “flatten the curve” so as not to overwhelm our hospitals. We did it. The curve is flattening and our hospitals are reporting large declines in patient intakes.

The United States is a massive country. It’s time to have a constructive conversation about getting people back to work — immediately — especially people living in rural areas and small towns or whose jobs do not require interacting in close proximity with large numbers of people.

After all, many workers are now in dire straits and are hardly immoral greedy profiteers worshipping the GDP.

Most importantly, it is time to stop treating religious Americans like criminals.

Catholic church leaders should begin to explore ways to allow Catholics to worship Our Lord while maintaining social distancing. Parking lot Masses? Perhaps offer more, but shorter Masses, even if Holy Communion may not be distributed to everyone (as it was for much of the history of the Church). Be creative!

Just recently officials inside the White House reached out to me to ask what Catholics want from the administration at this time. My response: Let’s flatten the curve and get our churches and economy opened back up ASAP.

This isn’t a call for an immediate “return to normal.” That won’t happen for a while. But you can’t put an entire economy in the freezer. And citizens cannot be locked inside their homes in perpetuity. Doing so will only lead to widespread poverty, depression, suicide — even civil disobedience and unrest as we are starting to see…

And that outcome could turn out to be worse than the virus itself.

Our public officials have done an excellent job educating about the virus, its effects on public health, and the necessary precautions we should take.

The American people get it.

We’re ready to begin the transition back to church and work.

Yet given the facts, the flattening curve, the emptying hospitals, and the clear ability to begin managing a responsible and gradual re-opening of the economy, those opposed to such a transition raise a serious question…

What else do they have in mind?