We Happy Few: The Great Privilege of Being Catholic Today

This morning, like most everyone else in the Catholic world, I’m living my life half focused on my own duties and responsibilities, and half focused on a somewhat wobbly camera shot of an old smokestack on a Vatican roof. That smokestack has become just about the most important thing in my world today, and so it will remain until it brings the news we all wait to hear.

As I wait, I’ve been thinking about Benedict and John Paul and all the popes who came before them, shepherds whose own papacy began with puffs of white smoke. What a motley crew they’ve been. Saints and sinners, celibates and cads, petty, power-hungry little men and holy, humble servants of the Lord.

Through the centuries, the Holy Spirit certainly has had his work cut out for him. Keeping some of those popes from sinking the Barque of Peter was an accomplishment only God himself could pull off. But you and I have never known those popes. And in that, we are blessed.

Being Catholic—fully and passionately Catholic—is no mean feat in this day and age. We live in a world unmoored, adrift in a sea of relativism and half-maddened by sin. In some places, the persecution of Catholics is public and bloody. In others, it comes in more subtle forms. Regardless, Catholics have much to mourn, much to protest. Our sorrow and our complaints are not unmerited.

But in the midst of that sorrowing and complaining, it’s far too easy to forget just how lucky, how blessed, we are. This generation of Catholic faithful doesn’t know what it’s like to look at a pope and feel anything less than love. Not love for the office. But love for the man. Deep, abiding, overwhelming love.

For at least the past century, the Holy Spirit has gotten into the habit of one-upping himself. Just when we think he can’t give us a pope any more bold or brilliant or brave than the last, a puff of smoke heralds a new holy father who proves us wrong.

The past 35 years have been particularly blessed ones.

We’ve had two of the greatest minds the Church has known on the Chair of Peter, men who have not only defended and explained the Church’s teachings with unusual brilliance, but who also made their own significant contributions to the Church’s rich intellectual patrimony: John Paul II with the Theology of the Body and Benedict XVI with his biblical theology.

We’ve also had two of the holiest men our Church has known on the Chair of Peter, men who bore the cross Christ placed on their shoulders with such humility and love that to see them was to see the face of their Master.

Save, perhaps, for us. We may be the happy few.

All I know, in this moment, staring at the smokestack in the corner of my computer screen, is that I am blessed to have lived during these times. We all are. We’ve walked with saints. We’ve been led by legends. For all our troubles, we’ve known what it’s like to look at the successor of Peter and weep with love.

This morning, for me, that inestimable privilege outweighs all the complaints I have about the culture. I wouldn’t trade my place in such an age with most anyone. And when my day of judgment comes, for this privilege alone, I owe God my greatest thanks. 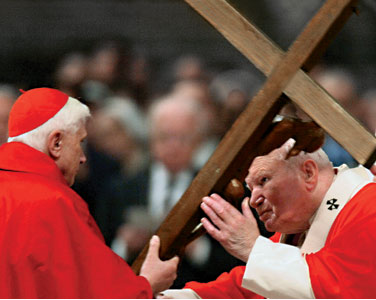