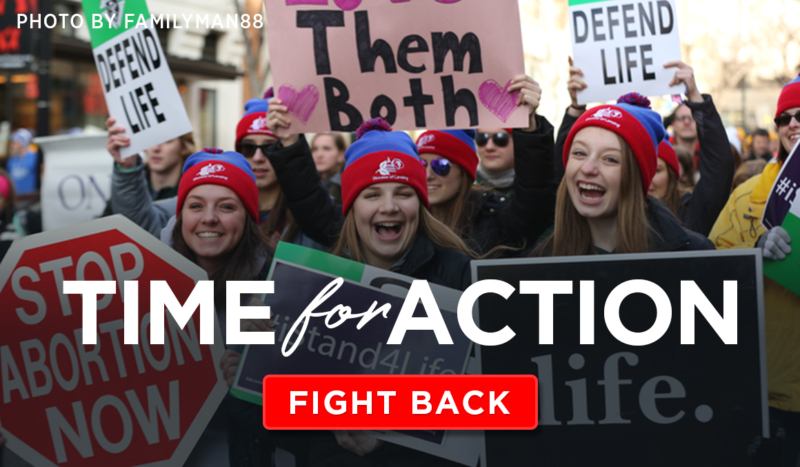 So what did House Democrats just do? Last week they broke a decades-old bipartisan agreement and passed a bill to force you to pay for abortions!

Had enough? It’s time to fight back.

Donate to our VOTES HAVE CONSEQUENCES campaign now!

The Democrats control the House. And so they decided to reward the billion-dollar abortion industry by ramming through a new spending bill without the Hyde Amendment. The vote ignored the pleas of millions of Americans, and is deeply unpopular according to the latest polling. Even 31% of Democrats oppose taxpayer funding of abortion (along with 83% of Republicans and 65% of Independents).

The battle now moves to the Senate, where the focus will be on Senator Joe Manchin.

ACTION NOW: House Democrats who just voted to turn back the clock must be held accountable. Forcing Americans to pay for abortions is absolutely outrageous. Democrats need to know that votes have consequences. They cannot be allowed to control the House any longer. Our job is to make sure they lose next November — and understand why.

We can defeat them. And they deserve to lose.

But wait… it gets even worse:

Several of the same Democrats who just voted for taxpayer funding of abortion ALSO signed the infamous “Statement of Principles” chastising the Catholic bishops for their decision to draft a document on Eucharistic coherence.

First they tell the bishops to back off. Then they vote to use your money to brutally dismember innocent children.

These people make me sick.

But outrage alone isn’t enough. It’s time to do something.

If we want the Democrats to lose control of the House, we need to target Democrats in vulnerable districts. And at the top of that list are Cindy Axne of Iowa and Matt Cartwight of Pennsylvania. Both are Democrats in districts won by Donald Trump last year. Both are Catholic. Both signed the letter against the Bishops…

…and both just voted to repeal the Hyde Amendment.

The people of Iowa and Pennsylvania deserve to know the truth about Cindy Axne and Matt Cartwright.

With your help, we’ll make sure they do, with new ads, videos, social media, text messages and more. And we won’t stop until they are gone.

The time for ‘talk’ is over.

Help us defeat them.

P.S. This is just the start. With your help, we hope to target every signatory of the letter against the Bishops who also voted for taxpayer funding of abortion. But we’re going to spend wisely. And start with those members that are most vulnerable. We’ll do as much as you allow us to do.

Remember priests, bishops, and parishes don’t do this work.

This is our job as laity.