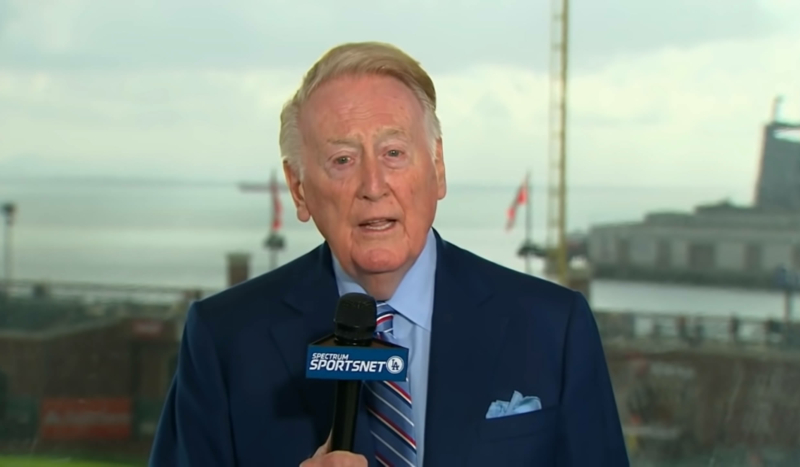 Legendary baseball broadcaster Vin Scully died on Tuesday night at the age of 94. A devoted Catholic, Scully was unashamed to use his platform as baseball’s most popular announcer for the good of the Church, and he leaned on his faith when tragedy repeatedly devastated his family.

Scully was renowned across the nation as a masterful radio and television baseball announcer. His baritone narrations had a lyrical, musical quality which served as the soundtrack for millions of Americans on warm summer days and crisp October nights.

In his 67 years as a professional sports broadcaster, Scully was the voice of the Los Angeles Dodgers and called nationally televised baseball and football games on CBS and NBC. His career spanned from the days of Jackie Robinson and Joe DiMaggio to those of Clayton Kershaw and Derek Jeter.

Vincent Scully was born in the Bronx in 1927 and named after his father, a silk salesman. Tragedy struck early in his life when his father died of pneumonia. Vin was only four.

After her husband’s death, Vin’s mother – an immigrant from Ireland – brought her son to her homeland to mourn with family. They made it to Ireland just in time for the International Eucharistic Congress in 1932. Scully was one of 200,000 people who attended a Mass in Dublin’s Phoenix Park as part of the congress.

He recalled walking home from school one day at age eight and seeing the final score of a game where the mighty Yankees had thumped the crosstown rival New York Giants (who played in New York prior to moving to San Francisco) by a score of 18-4. “My first thought was, ‘Oh, those poor Giants,’” he said. As a member of the Catholic Youth Organization, he learned he could get Giants tickets for free. School got out at 2:30, and Giants games were at 3:15, so the young Scully would walk 20 blocks from his Catholic school to the Polo Grounds, and fell in love with baseball.

Scully honed his skills by listening to ballgames while lying underneath a transistor radio, letting “the crowd noise come down like water out of a shower head.”

But he had to make one stop before he could pursue his dream of calling games, serving two years in the United States Navy shortly after the end of World War II.

After leaving the Navy, he enrolled at Fordham University, where he majored in English, helped found the university radio station, sang in a barbershop quartet, and played center field for the baseball team. Despite his natural talent, breaking in to broadcasting was not easy: He wrote letters to dozens of radio stations asking for a job before one – WTOP News in Washington, DC – finally gave him a chance as a substitute anchor.

The Brooklyn Dodgers hired Scully as a radio announcer after Dodgers owner Branch Rickey, a devout Christian, personally interviewed him. Scully thought Rickey would ask him about the intricacies of the sport, but instead Rickey asked about Scully’s personal life. When Scully said he was not married or dating, Rickey demanded, “Get a girl, get engaged, and get married.” Scully said, “Later I understood, from those who were doing far better than I, that in his mind, here was this 21-year-old kid going to be on the road with a lot of time on his hands, surrounded by a lot of famous ballplayers, and the temptations would be tremendous. I never gave it a thought that was the reason. He really wanted his employees to be married.”

In 1956, Scully was invited to a private audience with Pope Pius XII in Rome, arranged by his friend, Dodgers pitcher Ralph Branca. In the presence of the pope, Scully’s eloquence left him. He later recalled being so nervous that he couldn’t muster anything to say.

When the Dodgers moved across the continent from Brooklyn to Los Angeles, Scully followed — and quickly got Southern California hooked on baseball.

A 1964 Sports Illustrated article said that in Los Angeles, “When a game is on the air the physical presence of his voice is overwhelming. His pleasantly nasal baritone comes out of radios on the back counters of orange juice stands, from transistors held by people sitting under trees, in barber shops and bars, and from cars everywhere—parked cars, cars waiting for red lights to turn green, cars passing you at 65 on the freeways, cars edging along next to you in rush-hour traffic jams.”

In fact, so many people would bring transistor radios into Dodger Stadium to listen to Scully narrate the very game they were watching in person that Scully could hear his own voice reverberating throughout the stadium, and the audio engineers had to compensate for the feedback.

He quickly rose to national prominence after he was hired as play-by-play announcer for the World Series, first on NBC and later on CBS, for tens of millions of viewers. He was also tapped to call nationally televised NFL games on CBS. He was inducted into the Baseball Hall of Fame while he was still only midway through his career, and was given a star on the Hollywood Walk of Fame.

But Scully’s life was not always a charmed one.

In 1972, his wife Joan accidentally overdosed on medication and died suddenly at age 35. Scully was left to raise three young children alone. He was devastated. “I felt like I would jump off a building,” he later recalled. But he credited his Catholic faith with pulling him through the darkest period of his life. “From the first day I can remember, I was brought up thinking about death. It’s a constant companion in our religion. Tomorrow is so uncertain,” he reflected.

“We didn’t stop praying,” he said in an interview with the National Catholic Register:

The worst thing you can do in times of trial is to stop praying. The tough moments are when you need God the most.

There are so many good things about the Church, but that might be the most essential thing I’ve learned from it: the importance of continual communication with God. That’s what all the kneelers, candles, incense, stained-glass windows, holy water and other things are about: directing our minds and hearts to God.

About two years later, he married his wife Sandra Hunt, who was then a secretary for the NFL’s Los Angeles Rams. They raised his three children and her two, and they had another child together. (Sandra preceded him in death last year.)

As the play-by-play announcer for 25 World Series and thousands of Dodger games, Scully called countless iconic moments in baseball.

His play-by-play often sounded more like literature than the ad-libbing of a broadcaster. His words were quite literally like music to the ears. For a Los Angeles Times article, professors of music from the University of Southern California technically analyzed Scully’s calls and said they had cadence, rhythm, key signatures, and tonality similar to swing and big band music.

Scully was famous across the nation, but tragedy was never far away. In 1994, his son Michael was killed in a helicopter crash at age 33. Michael, a chemist for an oil company, had been inspecting a pipeline for damage after an earthquake when the helicopter went down.

“I’ve had some pain in my life,” Scully said as he reflected on the deaths of his son, wife, and father. “Faith is the one thing that makes it work, makes me keep going. … You know, this isn’t the only stop on the train. There’s one big one we’re still waiting for.”

Scully relied on the Eucharist his whole life. “I used my faith to guide me straight and narrow and strong, for sure,” he once said:

I think about that every week when I’m in line going up to the rail to receive Communion. That’s a pretty important moment. It always was and always will be. I feel a tremendous degree of comfort in the Catholic Church. It’s where I’ve grown up, where I’ve had the most important moments of my life. I’ve benefitted from the dedication of the nuns in grammar school, the reception of the sacraments and a rich tradition of prayer that you can take with you no matter where you are.

He was particularly close to the Blessed Mother, whom he called “the one saint everyone should have a devotion to.”

“It has been said, and I believe it to be true, that her prayers are more powerful than those of the rest of heaven combined,” he said. “No one was closer or more devoted to Christ on earth, so it only makes sense to see the same thing in heaven. Now, the Blessed Virgin seeks to help her spiritual children get home to spend eternity with her Son.”

Scully frequently lent his golden voice to the Church. He recorded a narration of the Rosary in conjunction with Catholic Athletes for Christ and Immaculate Heart Radio to serve as an aid to anyone who wants to contemplate the mysteries of the Rosary. (The recording is available on YouTube and downloadable on other music platforms.) He also helped start a Catholic radio station in Los Angeles, and engaged in other charitable work, such as supporting a foundation for people with Down syndrome.

He was a parishioner of St. Jude the Apostle in Westlake Village, California, and was a member of the Knights of Columbus. He worked with Catholic Athletes for Christ to arrange for Masses to be celebrated in Dodger Stadium for players and staff before Sunday games. In 2009, he was given the Cardinal’s Award by the Archdiocese of Los Angeles, and was also recognized with awards from the Catholic Academy of Communication Professionals and the Orange County Catholic Foundation.

In 2016, Scully announced he would retire from broadcasting at the end of the season at age 88. That year, he was awarded a Presidential Medal of Freedom, the highest honor a president can grant a civilian. The city of Los Angeles renamed the street on which Dodger Stadium sits Vin Scully Avenue.

As he prepared to retire, Scully said, “All I know is that I’m profoundly humbled and grateful to the Lord for the gift of being able to cover baseball for practically my whole adult life. When the time comes to sign off for good, I’ll look back with joy.”

In his final game on October 2, 2016, Scully signed off the air for the last time with an old Irish prayer:

“May God give you for every storm, a rainbow / For every tear, a smile / for every care, a promise / and a blessing in each trial. / For every problem life sends / a faithful friend to share / for every sigh, a sweet song / and an answer for each prayer.”

You and I have been friends for a long time, but I know in my heart that I’ve always needed you more than you’ve needed me, and I’ll miss our time together more than I can say. But you know what — there will be a new day, and eventually a new year. And when the upcoming winter gives way to spring, rest assured it will be time for Dodger baseball. So this is Vin Scully, wishing you a very pleasant good afternoon, wherever you may be.”

During his final season, an interviewer with the Catholic Digest jokingly asked Scully if, after all his success, he felt like he had one foot in heaven. Scully replied, “I don’t feel like I have one foot in heaven, but I think I can see it from here, especially at Mass.”