Today, on the eve of the Synod on the Family, a Polish priest who works–or rather, worked–in the Vatican decided to announce that he’s gay and has a partner. In an interview with “Corriere della Sera,” Msgr. Krzystof Charamsa said:

I want the Church and my community to know who I am: a gay priest who is happy, and proud of his identity. I’m prepared to pay the consequences, but it’s time the Church opened its eyes, and realised that offering gay believers total abstinence from a life of love is inhuman. Set aside, for a moment, that celibacy does not preclude a life of love (just ask Jesus). And set aside for a moment the fact that celibacy is something every Christian is called to for at least part of his life, while married love is the vocation only of some. And set aside the fact that Msgr. Krzystof seems to have no regard whatsoever for the vow of celibacy he took as a priest, a vow which he took freely and which had nothing whatsoever to do with his sexual proclivities.

Setting all this aside, could it perhaps be the case that this episode involving Msgr. Charamsa could finally put to rest the standard media interpretation of Pope Francis’ most famous, or infamous, words: “Who am I to judge?”

This was a story the media loved to tell: Here, finally, was a Pope who didn’t think the gay lifestyle was incompatible with being a good Christian. Here is a Pope who doesn’t judge others for who they love! Here was a Pope who could evolve on gay marriage. (Just like Obama!)

This was always a fantasy. Pope Francis insisted–because he’s a faithful son of the Church–that we owe our respect and love to everyone. He insisted that we should not hold the past sins of those who have repented against them. Pope Francis made it clear that homosexual attraction does not prevent someone from being a good and faithful Christian. But he also warned against turning one’s temptations into a “lobby.”

Just as a refresher, here’s Pope Francis’ use of “Who am I to judge” in its full context:

But if a person, lay or priest or Sister, has committed a sin and then has converted, the Lord forgives, and when the Lord forgives, the Lord forgets and this is important for our life. When we go to confession and truly say: “I have sinned in this,” the Lord forgets and we don’t have the right not to forget, because we run the risk that the Lord won’t forget our [sins]. That’s a danger. This is important: a theology of sin. I think so many times of Saint Peter: he committed one of the worst sins, which is to deny Christ, and with this sin he was made Pope. We must give it much thought. 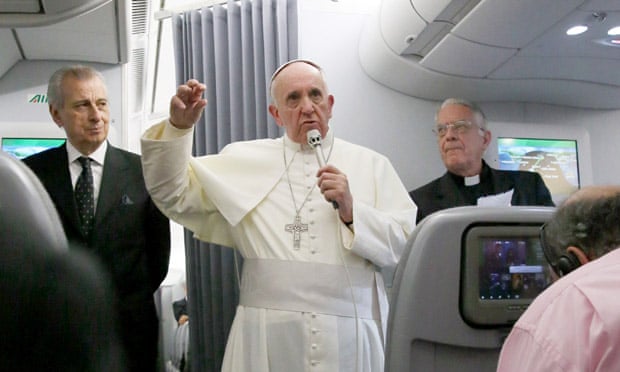 “If a person is gay and seeks the Lord…”

But, returning to your more concrete question: in this case, I’ve done the investigatio previa and we found nothing. This is the first question. Then you spoke of the gay lobby. Goodness knows! So much is written of the gay lobby. I still have not met one who will give me the identity card with “gay”. They say that they exist. I think that when one meets a person like this, one must distinguish the fact of being a gay person from the fact of doing a lobby, because not all lobbies are good. That’s bad. If a person is gay and seeks the Lord and has good will, who am I to judge him? The Catechism of the Catholic Church explains this in such a beautiful way, it says, Wait a bit, as is said and says: “these persons must not be marginalized because of this; they must be integrated in society.”

The problem isn’t having this tendency, no. We must be brothers, because this is one, but there are others, others. The problem is the lobbying of this tendency: lobby of the avaricious, lobby of politicians, lobby of Masons, so many lobbies. This, for me, is the more serious problem.

The line, “Who am I to judge,” was a response to a hypothetical situation involving a priest who might have engaged in homosexual behavior in the past but who makes a sincere effort to live according to God’s will.

In the case of Msgr. Charamsa, the hypothetical has become concrete, with one crucial difference. Here is a priest who openly rejects the Church’s teaching on human sexuality, has willingly (and, apparently, proudly) violated his vow of celibacy, and who, rather than asking mercy for the things he has done wrong, is lobbying for their justification.

Not surprisingly, Msgr. Charamsa has been relieved of his duties at the Vatican, with possible further discipline from his ordinary.

Here is the statement from Fr. Lombardi of the Holy See press office:

With regard to the declarations and interview given by Msgr. Krzystof Charamsa it should be observed that, notwithstanding the respect due to the events and personal situations, and reflections on the issue, the decision to make such a pointed statement on the eve of the opening of the Synod appears very serious and irresponsible, since it aims to subject the Synod assembly to undue media pressure. Msgr. Charamsa will certainly be unable to continue to carry out his previous work in the Congregation for the Doctrine of the Faith and the Pontifical universities, while the other aspects of his situation shall remain the competence of his diocesan Ordinary.

Hopefully the sad case of Msgr. Charamsa will remind us of this, and put to rest the tired narrative that “Who am I to judge” signaled the triumph of moral relativism over the Church’s teachings on human sexuality.

In the meantime, pray for the Church, the Synod, and the Holy Father. And pray for our brother, Msgr. Charamsa, who faces a difficult road ahead.