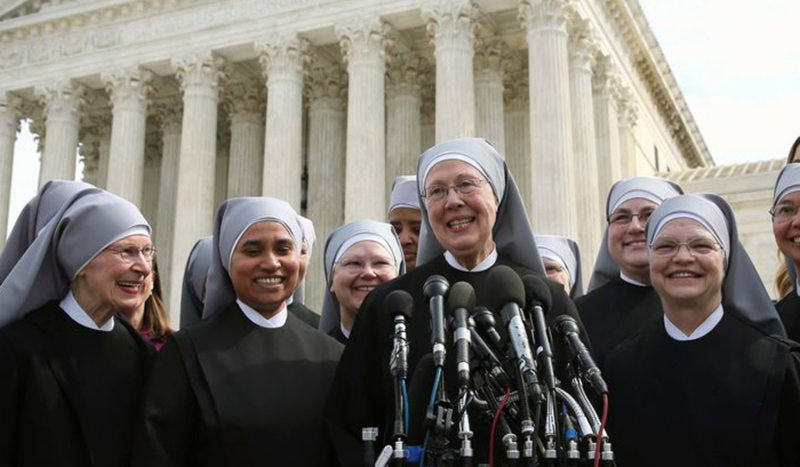 Wow, what a great day for Catholics!

Both are big WINS.

First, the Court ruled that the Trump administration was within its rights to grant a religious exemption to the Little Sisters of the Poor. The Court again upheld the right of the religious order of nuns to procure health coverage that does not support abortion-inducing drugs.

In a separate case, the Court reaffirmed that a Catholic school—not the government—can decide whether to hire, retain, or terminate certain employees. This case matters because anti-discrimination laws have recently been expanded to force employers to retain gay, lesbian, and transgender employees (or even a man who simply identifies as a woman), even if the employer objects to their lifestyle. Catholic schools now have the freedom to decide what is best for their schools.

“The religious education and formation of students is the very reason for the existence of most private religious schools, and therefore the selection and supervision of the teachers upon whom the schools rely to do this work lie at the core of their mission.”

And the best part? These rulings were not narrow 5-4 decisions. Both were decided by decisive 7-2 majorities.

But Pennsylvania Attorney General Josh Shapiro, a strong supporter of Joe Biden, refused to leave the Little Sisters alone. Shapiro took them to court again in an attempt to force them to pay for contraception, abortifacients, and sterilizations.

If elected, Joe Biden could immediately rescind the Trump administration’s policies protecting the Little Sisters, and force them to return to federal court again.

Today’s rulings are big victories for the free exercise of religion.

But let’s not forget, these are “carve-outs” for religious groups from existing laws.  In sum, the Court is willing—for now—to treat religious groups differently from other groups, organizations, or corporations.

We cherish that freedom, but we know it might be temporary.

Hostility toward religion is on the rise. Hate groups on the Left aren’t giving up.

Thanks to several key judicial appointments, we have a Court willing to protect us.

P.S. One more thing… As you watch the reaction to the Little Sisters case, don’t be fooled by the “Catholic” Democrat solution of calling for Medicare for All.  This is Joe Biden’s socialist plan to end private insurance altogether and force every American into a government health care plan that would provide free contraception and abortion for all—paid for by you.  No thank you.