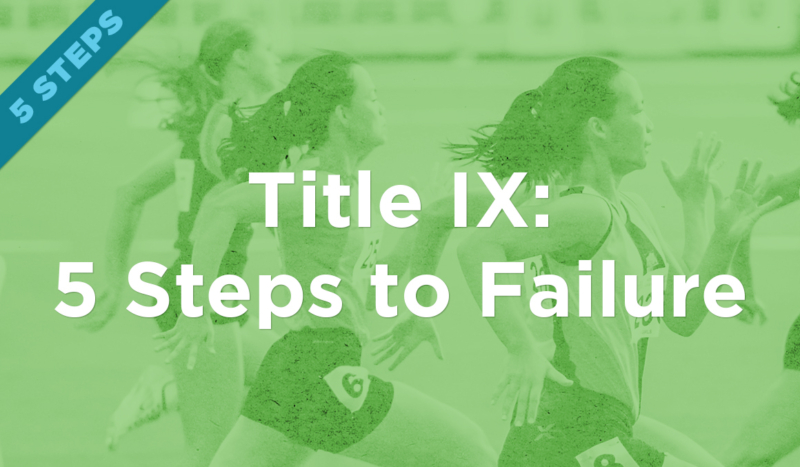 Fifty years ago, Title IX passed with great fanfare – and much controversy. Its basic purpose was to establish systemic equality for women in education programs that receive federal funding by banning discrimination on the basis of sex.

Most Americans think of it as “the women’s sports bill.”

No person in the United States shall, on the basis of sex, be excluded from participation in, be denied the benefits of, or be subjected to discrimination under any education program or activity receiving Federal financial assistance…

Congress left the legislation vague, paving the way for the executive branch – and unelected officials – to determine both what it means and how to enforce it.

Over time, Title IX has morphed in many cases into a weapon not only against discrimination and sexual harassment, but also against due process, justice, and ultimately women themselves.

Here is the story of Title IX in 5 steps.

Step 1: It’s Not About Sports, It’s About Sex

When Title IX passed in 1972, there was no mention of “sexual harassment” in its language. In fact, that term did not even come into wide usage in Washington until the 1980s, when federal courts ruled that sexual harassment falls under the category of “sex discrimination,” and thus under Title IX.

In the 1990s, the courts began applying sexual harassment liability rules under Title IX. The Department of Education’s Office for Civil Rights (OCR) began issuing guidelines elaborating on these new judicial rulings, and Title IX quickly became more about sexual harassment than about equal access to programming and resources.

Step 2: The Ends Justify the Means

Title IX enforcement shifting from sports to sex amplified the possibilities of using it for broader purposes. Progressive politicians saw Title IX as a vehicle for accelerating social change – and a workaround of the American legal system, which they saw as slowing that transformation down.

By the 2008 election of President Barack Obama, progressives had changed people’s understanding of Title IX from a simple bill securing women’s educational options into the vehicle by which the Obama administration could end all sexual harassment, discrimination, and assault on every American campus.

The stated purpose was to address the culture of sexual harassment and rape on college campuses. By declaring such an unobjectionable goal, the administration set itself up to justify any means necessary – including running roughshod over the American legal system – to achieve it.

It was clear that President Obama intended to build much of his legacy on enforcing Title IX – or whatever the Departments of Justice and Education dictated Title IX to mean. A lot of money was on the line.

In 2011, the OCR issued what is known as the “Dear Colleague Letter,” with specific instructions on how universities and colleges were to apply Title IX – and threatened to cut off all federal funding for schools that did not comply.

The OCR effectively created a parallel legal system, with mandates and regulations far more demanding on educational institutions than the interpretive rulings of federal courts – or the language of Title IX itself – required.

The “Dear Colleague Letter” demanded that institutions “take immediate action to eliminate harassment, prevent its recurrence, and address its effects.”

When dealing with sexual assault accusations, institutions might interpret this as a mandate to take the law into their own hands (and many did). In more and more schools, including the Ivy leagues and state schools, Title IX compliance officers were made detective, judge, jury, court of appeal, and executioner. Rather than acting as neutral compliance officers for program equity, Title IX staff became investigators operating independently of the procedures of the U.S. legal system.

When that happened, no one won. Both victims and accused lost access to basic rights as American citizens, and the schools themselves were saddled with the daunting responsibility of creating and maintaining their own law enforcement (which in many cases now existed in tension with local city or town police when it came to campus sexual assault cases).

The goal was no longer justice – it was the self-preservation of some of America’s most powerful schools.

Under pressure from the Obama administration, many schools put new rules in place for defining and investigating sexual misconduct, as well as new modes of enforcement. Out of fear of losing federal funding, schools overcompensated.

Nowhere was this more evident than in the OCR’s lowering of the standard of proof for convicting someone of sexual assault.

The OCR’s 2011 letter required institutions to use what is called the “preponderance of evidence” standard to convict the accused.

“Preponderance of evidence” means that the accused can be convicted if the evidence suggests he or she is guilty “more likely than not” rather than “beyond reasonable doubt.” This standard is one of the lowest standards of proof for conviction in the American legal system.

Courts sometimes use the preponderance standard, but only in civil trials that also guarantee an independent and neutral investigator, an appeal body, legal counsel, and a hearing and right of appeal – none of which were required of schools enforcing Title IX compliance.

While many of the Obama-era interpretations were rescinded in 2017 by the Trump administration, it was too late. It took nearly three years to officially remove the requirements placed on the schools.

But American universities and colleges had already created a parallel legal system whose mission was to rid the world of sexual harassment by any means necessary – or lose all federal funding under Title IX.

The legitimacy of the system and of Title IX itself were permanently damaged. And that parallel legal system persists today.

Step 5: It’s Not About Sex, It’s About Gender

Ironically, then, Step 5 – advocated by many today – is to use Title IX to destroy women’s sports entirely.

The “Dear Colleague Letter” of May 13, 2016 stated that the Department of Justice’s Civil Rights Division and the Department of Education’s OCR jointly interpreted Title IX to include “an individual’s internal sense of gender” – not just biological sex as understood in 1972.

As a condition of receiving Federal funds, a school agrees that it will not exclude, separate, deny benefits to, or otherwise treat differently on the basis of sex any person in its educational programs or activities… The Departments treat a student’s gender identity as the student’s sex for purposes of Title IX and its implementing regulations.

While prohibiting harassment is a laudable goal, the irony is that Title IX – once touted as legislation that would liberate women’s sports – now became a vehicle for essentially eliminating female-only sports and facilities.

The same letter directed that “when a school provides sex-segregated activities and facilities, transgender students must be allowed to participate in such activities and access such facilities consistent with their gender identity.”

Coda: A World Without Women?

The story of Title IX isn’t over, but after 50 years the legislation is no longer something for women to celebrate uncritically. The members of Congress who voted for the bill saw it as a way for women to participate more fully in campus life and enjoy more access to academic and career opportunities.

Over time, many women did benefit from Title IX.

But the price will be high.

In the “ends justify the means” world of DC politics, the bill has now become a bludgeon for coerced cultural change. It ended up helping create a new America, where the very women it was intended to protect are slowly being erased.