The Question: What is a Woman? 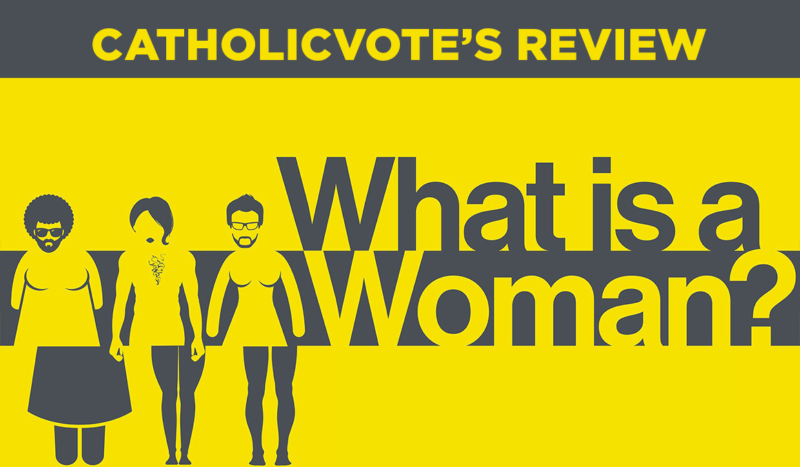 The new film “What is a Woman?” premiered online for Daily Wire subscribers June 1. The much-anticipated documentary by Catholic commentator Matt Walsh features his epic journey across America and the Atlantic to find out the truth about sex and gender.

The title question caught on months before the film’s release. “What is a woman?” Senator Marsha Blackburn asked Supreme Court nominee Ketanji Brown Jackson back in March. Famously, Jackson replied that she could not answer the simple question because she is “not a biologist.”

“What is a woman?” has become a catchphrase for conservatives precisely because it forces a choice. Either a “woman” is something that can be defined and thus honored and protected in law and culture, or there is no definition, anyone can apply the meaningless term to themselves, “woman,” and there’s nothing to defend.

In civil society, the assumption goes, words matter. But they can only really matter if they have definitions. And it is only by agreeing on the plain definitions of words that we can understand each other and set up guidelines and boundaries that make our common pursuit of happiness possible.

Walsh genuinely wants to understand where pro-trans and pro-LGTBQ activists are coming from. The film’s detractors will say this is a posture, and that Walsh is just mocking them for a buck. But that’s not the impression the film gives. Far from setting up a straw man to tear down, Walsh goes out to seek the “steel man” arguments from leaders in the trans movement.

His team found an impressive lineup of pro-trans and LGBTQ therapists, doctors, and intellectuals willing to sit down and talk to him about women. Walsh’s characteristic humor and uncanny ability to get people to reveal their true convictions permeate the story of his “journey to discover what a woman is.”

The humor helps. Because as the film progresses, he uncovers an increasingly dark and confused underbelly of Western cultural demise.

The film’s brilliance – aside from its state-of-the-art videography and editing – is that Walsh just lets people talk.

He lets them tell the story in their own words. Lots of words.

The takeaway? Not one pro-trans spokesperson can (or will) define what a woman is.

“It’s a simple question,” Walsh muses, “But why is it so hard to answer?”

The key is in the film’s opening sequence.

Walsh is heading to a lake with his fishing rod “to think.” “Nature,” he says, “seems to always tell the truth. Even when we don’t want to hear it.”

And then he reveals the secret.

The question “What is Woman?” is a hook – to catch a bigger fish, as it were. Yes, it’s one important question that trans ideologues have refused to tackle. (We hear multiple interviewees replying the Walsh with, “Why are you asking that question?”) But there are a number of other questions that could be posed. What is a man? What is gender? What is sex?

But the central question is much deeper. Fisherman Walsh tackles it even before he lands his first interview:

The swamp of Western culture he is fishing in can’t even fathom that crucial question. In the film’s many “man on the street” sequences, Walsh is constantly talking to young people who insist, “That’s your truth” or, “Whatever your reality is, I don’t care.” They can only talk of “my truth” and “your truth.”

Many women throughout the documentary essentially erase themselves. They insist  that “a woman is someone who identifies as a woman.” And that is because there is no truth, no reality that anyone can grasp.

In one of the documentary’s many mind-blowing moments, Dr. Patrick Grzanka of the University of Tennessee clams up. “I’m really uncomfortable with that language of ‘getting to the truth…. If you keep probing we’re going to stop the interview.”

“Getting to the truth,” he flatly states, “… it sounds transphobic to me.”

It’s Funny… Until It’s Not

Early in the film, there are some real belly laughs. After all, Walsh is telling history’s most preposterous joke: “Some women have penises.” The Massai warriors he interviews respond to Walsh’s explanation of “non-binary” with laughter. “There is something wrong with them.”

But by the second or third time we hear from Dr. Michelle Forcier, a pediatrician in Rhode Island who prescribes puberty-blockers to children young enough to believe in Santa, it becomes clear that the joke is both preposterous and deadly.

Walsh also takes time to talk to the victims of the joke.

We hear – to name a few – from a teammate of trans swimmer Lea Thomas, Scot Newgent who regrets and is dying from her transition, the inimitable Jordan Peterson, and a Canadian dad awaiting trial for “misgendering” his own daughter. “What is a Woman?” allows them to tell their stories.

Walsh talks to Dr. Miriam Grossman, who has worked tirelessly in her field to expose the long-term effects of the multi-billion-dollar gender industry on its “patients.” Her testimony and research underpin the film’s central message: If you care about children, if you care about women, if you care about the truth, do not stop asking these questions. The day is far spent, and the night is drawing near.

While “What is a Woman?” is about exposing the culture of “sexual justice” for what it truly is, it is more profoundly a film about Pilate’s last question to Christ, “What is truth?”

And it’s about what happens when we answer, “I am my own truth.”

CatholicVote recommends this film for adults and high school students able to watch and discuss it with a parent or trusted adult. Due to graphic verbal descriptions of sexual acts and reproductive organs, it is not recommended for children under 16.