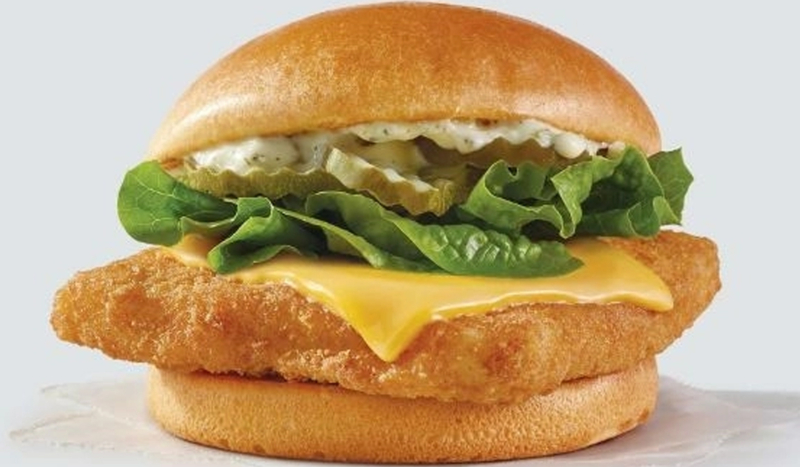 We’ll get to the sandwich in a minute. First, we’re going to learn something about fish.

How many kinds of fish are there? You think there are five, which is incorrect. But don’t feel bad. Most adults can only name five kinds of fish: tuna, salmon, rainbow trout, fish sticks, and dolphins.

Right now you’re shaking your head and thinking, “Dolphins aren’t fish, they’re mammals.”  And you know what?  You used to be right. Like a year ago. In fact, for most of fish history, you would have been right.  Until recently, experts all agreed that dolphins weren’t fish. But those were the old kind of experts, before Dr. Fauci. Now dolphins are fish. Next week, they might be geese.  Maybe bears.  We have no idea.  It’s science.

The bigger point is, you’ve been devoutly stuffing your face every Friday in Lent with all kinds of fish sandwiches, but you never stopped to think what kind of fish it was. None of us did. So let’s find out.  Welcome to the school of fish.

School of fish?  That’s not even funny.  When are we getting to the sandwich?

In a minute. Pay attention.

Alaska pollock — or Gadus chalcogrammus, if you’re into that kind of thing — pretty much accounts for every seafood-based fast food item currently available for consumption (the Lobster McGriddle, I am told, is still on the drawing board).  Alaska pollock are a silver-colored fish that can reach between 12 to 20 inches in length.  They are caught by dragging huge nets through the ocean.  This is called “trawling.”  The full nets are then hauled onto enormous seafaring trucks.  These are called “boats.”   About 3 million tons of Alaska pollock are caught each year.  Some of the fishing boats that catch them are hundreds of feet long and are basically floating processing plants.  It’s quite something.

But the crazy thing about Alaska pollock is that it’s not really Alaska pollock. It sounds silly, but it’s true. For a long time, it was included in the cod family. Then it was moved over into the pollock family, where it got the pollock name. Now the people in charge have changed their minds again and decided that it’s cod after all.  But because people in the fishing industry are used to the name “Alaska pollock,” it’s still called that.
So to sum up — first it was cod, then it was pollock, and now it’s cod again, but it identifies as pollock and likes to play on pollock sports teams.

The only thing the fish authorities agree on is that Alaska pollock is found in the Bering Sea, which is the neighborhood of the Pacific Ocean up where Russia and Alaska almost touch each other. Of course, at one point, they did touch, and it was over this prehistoric land bridge that the first humans came over to North America and opened the first Wendy’s.

You had no idea how you were going to bring this back to the sandwich, did you?

And that brings us to this week’s sandwich: the Wendy’s Panko Crispy Fish.

It’s really good!  The fish is tender on the inside and, as advertised, crispy and pankey on the outside.  By far the pankiest sandwich so far.  The lettuce is crisp and leafy — no shredded business here.  The bun is toasted and soft, and there’s an entire slice of American cheese.  So far, so good.  The pickles don’t say much, but they get the job done, and the tartar sauce is perfectly proportioned to add just the right amount of glistening slippery goodness to each crumbly bite.  This sandwich could use just a little spice, but if the trade-off is that kids will eat it, we won’t complain.  One word of caution: the lettuce is somewhat limp on leftover sandwiches after four days in the fridge.  Come to think of it, a lot of words of caution would be appropriate there.  Never mind.

The takeaway: Get to Wendy’s.  This one is worth it.