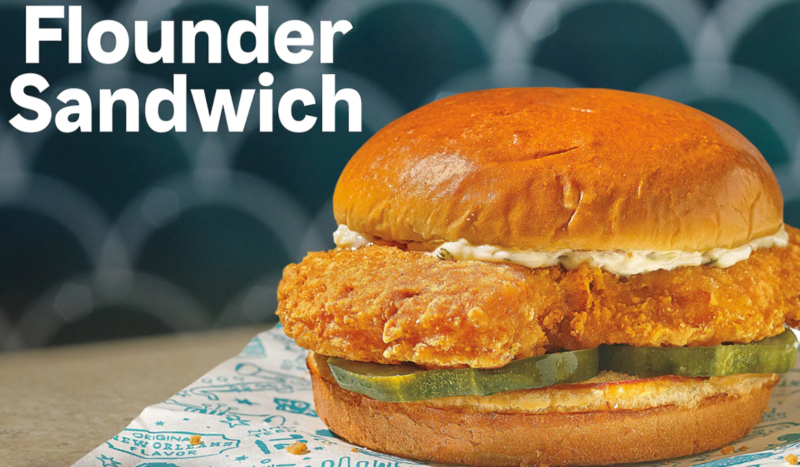 Well, it’s Lent again, which means it’s time to enter into a season of mortification and self-denial.

According to ancient Church custom, one of the ways Catholics embrace the Lenten spirit of sacrifice is by holding contests to rate the biggest and tastiest fried fish sandwiches we can find. Then we stuff them into our faces with ascetic zeal and cheese fries. It’s called Friday abstinence.

But let not your heart be troubled. Let your arteries be troubled, and let your Lenten journey begin.

This sandwich is not a trivial affair. The hunk of flounder is big — like, real big. Breaded and fried to golden perfection, it sits nestled between two warm buns that, though not diminutive by any means, can barely contain the main course.

If you’re looking for light and flakey, this may not be your sandwich. It’s a meaty, almost dense filet with the flavor to match.

The “Cajun” is no lie, either. This flounder has some kick to it. If you like spicy, this sandwich is for you. Just a word of warning — the heat may be a little much for some kids. And while we’re on the topic of kids, one of these sandwiches can feed at least two youngsters (see “real big” above).

In the pickle department, crisp dill slices pop with each bite — a welcome contrast to the limp, grey-green afterthoughts that cling to some of the other contestants in the arena.

If there is any weak point to this sandwich, it’s the tartar sauce. It’s good, but not great, and that’s during the few bites when you get to taste it. It’s just… not enough. A modest smear on a sandwich that deserves a slather.

Overall, a welcome addition to the field. Well done, Popeye’s.