The Clowns of Hell 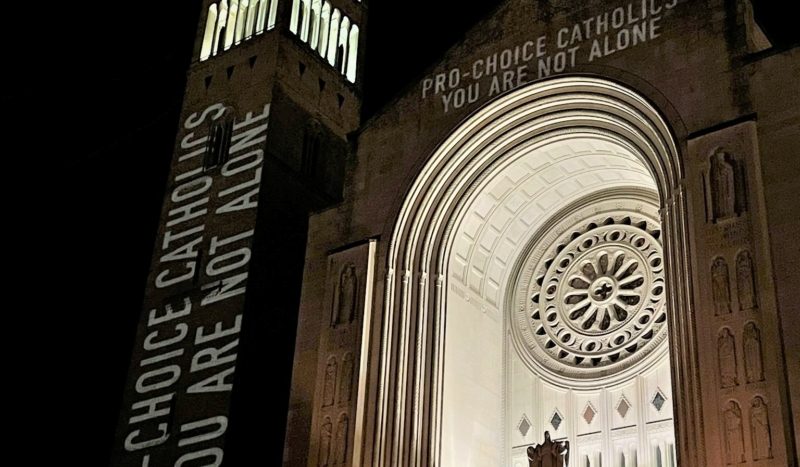 Last night, the group “Catholics for Choice” projected enormous messages on the facade of the Basilica of the National Shrine of the Immaculate Conception. The messages included “1 in 4 abortion patients is Catholic” and “Pro-choice Catholics you are not alone.” Inside the Basilica, a vigil Mass was taking place in anticipation of today’s annual March for Life.

The stunt drew its share of attention. It was, after all, a stunt, and that is what stunts do — draw attention. There was no damage done, at least physically. They did not spray paint the walls of the church, or smash any statues. Like Catholics for Choice, the prank was, at first glance, harmless, clownish, and pitiable.

But let’s not be too dismissive. Harmless though it was, clownish though it was, there is a malice behind these antics that is unmistakable. It’s the ancient malice, the non serviam, the worm that never dies but creeps through the centuries and through the shadows of human experience, whispering its empty promises. The characters outside the Basilica are clowns, to be sure. But they are the scary kind of clown. The kind we don’t much like to talk about, much less think about.

Outside the basilica, outside the church. Outside the Church. This is where they stand, projecting. Taking all their anger, their hate, their emptiness, they try to hurl it back at the one who they blame for their misery. They have been deceived, tricked, had the joke played on them by the clowns they let inside. For indeed, these are who the clowns are. They are legion, and they like to play jokes on us. Deadly jokes. It’s no coincidence that among the most rabid supporters of abortion are avowed servants of the Great Deceiver. And like their holiest sacrament, in which the bodies of the innocent are violated and destroyed, so too they seek to destroy the Body of the one they hate. And they know, because the clowns know. They know that His body is the Church, and that is what they want to destroy.

Inside the church, the Sacrifice is accomplished, the Lamb of God offered in reparation for the sins of the world. Our sins, and their sins. The Body — broken, wounded, pierced — is yet glorified. He who was slain is very much alive, and those who sought to kill Him are left confused and confounded. The church is desecrated and defaced on the outside with shrieks of triumphal glee, but behind the projector, in the shadows, can be heard the grinding of teeth. The lights, the shadows, the holy sacrifice. One is reminded of the ghoulish creatures dancing in the torchlight on the body of Aslan, ecstatic in their victory, oblivious to their defeat. So too the servants of “choice.” Clowns to the end, they don’t get the joke they play. It’s on them.