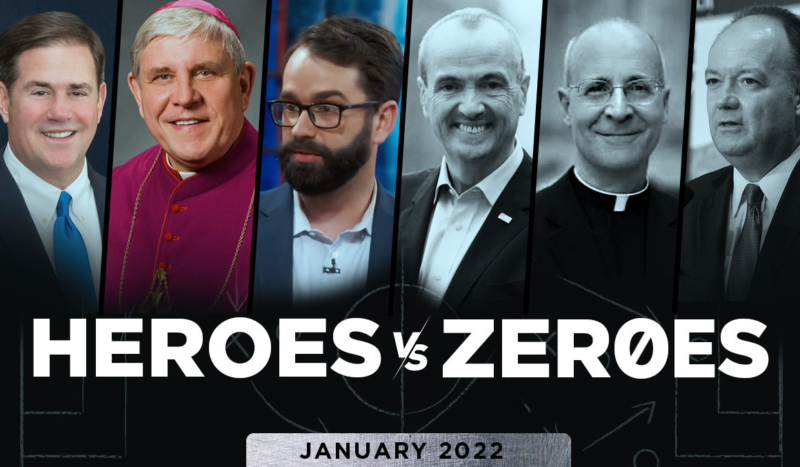 CatholicVote is committed to holding self-professed Catholic public leaders and institutions accountable to Church teaching. That’s what our Catholic Accountability Project is all about.

You deserve to know exactly where our Catholic leaders stand – both those who exhibit real heroism in standing up for the truth, and those who exhibit zero heroism, and cause scandal by their words and actions.

Every month, we will hold these Catholics accountable – and praise them when they earn it.

A lifelong Catholic, the governor of Arizona has made his mark in the fight for school choice and parental rights this month. He’s putting taxpayer dollars back in the hands of families so they can make their own choices about childcare, tutoring, and tuition. Governor Ducey’s strategy will especially benefit minority families, who suffer disproportionately from school closures.

Archbishop Listecki issued an uncompromising catechesis and bold directive to his archdiocese, reaffirming the Church’s teaching on sex and gender and requiring all archdiocesan offices and ministries to do the same. Needless to say, an archbishop simply doing his job – explaining Church teaching – attracted the ire of Leftist media figures (see our “zeroes” section below for more).

Readers who would like to read Archbishop Listecki’s important directive can find it here.

Cultural commentator Matt Walsh of The Daily Wire agreed to go on the Dr. Phil Show in front of a hostile audience to debate gender ideology with two “trans” activists. He carried himself with distinction, and calmly exposed the “gender experts’” inability to define simple terms such as “woman.”

Self-identified Catholic Gov. Phil Murphy of New Jersey used the anniversary of Roe v. Wade to sign into law the Freedom of Reproductive Choice Act. He thus enshrined abortion access into New Jersey state law regardless of whether the Supreme Court overturns Roe this year. He also signed a second bill expanding insurance coverage for birth control. That’s two major strikes against Catholic moral teaching in one day — a disgrace.

The celebrity priest stayed true-to-form in January, publicly criticizing various bishops who disagree with him and upheld Catholic teaching. Martin tweeted censure against Bishop Strickland of Tyler, TX, in mid-January for encouraging what Martin characterized as insubordination on the part of a priest who had publicly questioned Cardinal Blase Cupich of Chicago over a liturgical matter. One week later, Fr. Martin again took to Twitter, disapprovingly sharing the new Archdiocese of Milwaukee policy against LGBTQ denials of Church teachings on sexuality in Catholic parishes and parochial schools.

As chairman of the NCAA, Georgetown University President John DeGioia, a self-professed Catholic, could have been a strong witness to the biological realities of male and female during the ongoing controversy over “transgender” athletes. Instead, he went along with the demands of the radical Left and opened the door for individual sports to allow biological males to dominate (and thus erase) women’s sports.