The 10 Most Beautiful Catholic Churches in New England 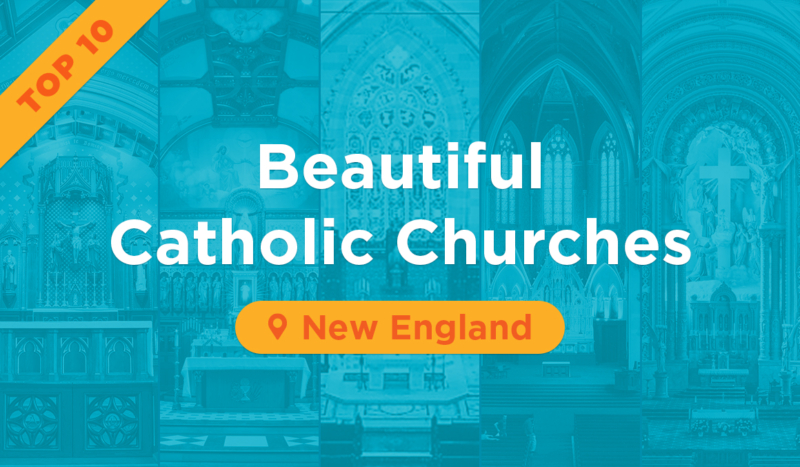 Traveling through New England on an historical tour? Check out these stunning and historic Catholic churches along the way – and discover that the birthplace of the Revolution is also home to a wealth of Catholic heritage! Here are the region’s 10 most beautiful churches, in no particular order. Don’t see your favorite New England church listed? Leave your picks in the comments!

St. Mary’s Church is recognized as the birthplace of the Knights of Columbus and houses the tomb of Bl. Michael J. McGivney, founder of the Knights. The gothic revival church underwent a massive historic preservation and artistic renovation from February 2019 to September 2020. Under the administration of the Dominican order from 1886 – 2021, St. Mary’s Parish continues to thrive as the mother church of the parishes of New Haven. The church boasts amazing artwork honoring both Dominican and North American saints.

Inspired by the Basilica of St. Mary Major in Rome, this Italian Renaissance church sits in the center of Waterbury as a testament to the Italian and Irish immigrants who kept the faith in their city. The light-filled interior makes it unique among New England churches of its era, and visitors will be awed by the stunning baldachin over the main altar. Pope Benedict XVI declared the church a minor basilica in 2008. You can take a 3D tour of the basilica here.

The mother church of Stamford, CT, St. John the Evangelist was built in 1875 by Irish immigrants, who dragged its stones by hand from a local quarry. The stained glass windows are one of the largest collections of American 19th-century stained glass on the east coast. Its interior boasts a high altar, gold detailing, beautiful reredos, and permanent altar rail. You can take a virtual tour here.

Begun in 1874, this Redemptorist church is in the Romanesque style with an unusual octagonal lantern-shaped dome rising 100 feet above the nave. It is a shrine to Our Lady of Perpetual Help and quickly became known as “Lourdes in the Land of the Puritans” (between 1878 and 1884 over 300 cures were documented). Visitors can still see the discarded crutches of those healed in the church. Pope Pius XII declared it a basilica in 1954 and it remains an active parish of the Archdiocese of Boston.

Thomas Aquinas College opened its New England campus in 2019 on the grounds of a former Protestant seminary. The chapel dates back to 1909 and is of the Collegiate Gothic style with a cruciform shape. The college renamed the chapel Our Mother of Perpetual Help and it underwent massive renovations and historical preservation. It now includes a tabernacle, confessionals, a permanent altar and altar rail, a high altar and reredos as well as beautiful gold stenciling and painted statuary.

The recent renovation, completed in 2019, has restored the Archdiocese of Boston’s cathedral to its original grandeur. Designed by Patrick Keely, the church is in the Gothic Revival style with splendid stained glass and soaring arches. In a nod to the fraught history of Catholics in Boston, bricks from the 1834 Know-Nothing riots, in which an Ursuline convent was burned to the ground, were used in the arch that frames the front door.

We can thank the French Canadians for this astonishing and massive Romanesque-style church. Its spire is the second tallest in New England at 256 feet, and it dominates the skyline for miles around. 32 enormous angel statues stand along the interior of the nave, keeping watch over the recently restored ornate decoration and world-class organ. Above the main altar, winged angels soar around the “Vision of St. Anthony,” a life-size depiction of the saint adoring the infant Jesus and his Cross.

Though quite tiny, the “divine clutter” inside the Shrine Church possesses an unpretentious beauty unrivaled in New England. Restored in 2020, the stained glass, wooden carvings, and painted murals inside give light and character to the tiny chapel. A medieval-style carving of the 12 apostles flanks the image of the Divine Mercy above the tabernacle, and a side chapel holds a first-class relic of Pope St. John Paul II.

Constructed in 1900, St. Anne’s Church is northern New Hampshire’s premiere example of late Victorian Romanesque architecture and is richly decorated with carved wood and Corinthian columns. A splendid dome at the intersection of the nave and transept includes eight identical panels decorated with cherubim. A side altar holds a first class relic of St. Anne for public veneration. The beauty of this church is a testament to the millworkers and lumberjacks who made great sacrifices for its construction for the glory of God.

Men of the parish laid the first stone on August 15, 1848, for what has become one of the most famous Catholic churches in New England when John F. Kennedy married Jacqueline Bouvier there in 1953. The church, however, needs no celebrity status to earn its place in the top 10 most beautiful churches in New England. It is a brownstone Gothic Revival church with a dazzling, well-lit interior. Architect Patrick C. Keely built nearly 600 churches along the east coast in the 19th century, and this is one of his finest.

Don’t see your favorite church listed? Please leave it in the comments below and we’ll check it out!